Popular automation app IFTTT (If This Then That) has rolled out an interesting promotion. Until October 7, subscribers can set their own price for the step-up Pro plan. Literally. There’s a field where you can enter whatever number you want to pay going forward for IFTTT Pro.

There is a small catch. You must enter at least $1.99 per month.

In return IFTTT says they will honor the monthly subscription price you chose… forever: 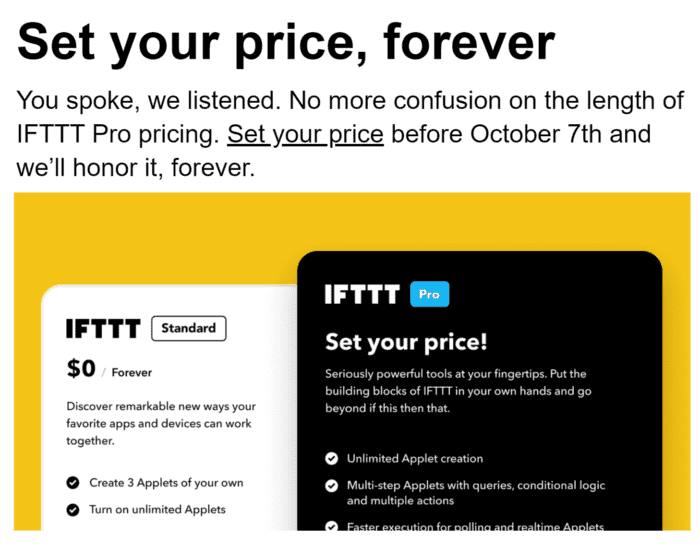 I don’t recall seeing this kind of marketing promotion for an app before (though given there are hundreds of thousands that it’s likely has).

I’m not a heavy IFTTT user. However, for those that do rely on it for various cloud automations — including controlling smart home devices such as lights — this is an appealing opportunity. The idea of knowing that your IFTTT subscription price will never increase is quite an appealing offer I think.

There are similar “lifetime” plans for other apps and services. One that comes to mind is Plex. I have a RAID system where I store media and access it on the home theater via a (superb) NVIDIA Shield streaming box. Though I was previously a KODI loyalist, the feature set on Plex is just insanely good. Being able to access it all on any device, even outside the home, is icing on the cake. And for a guy like me that values good looking box art, movie collections and advanced sorting, and support for high quality audio (Atmos) Plex is just too good to be true. In any case from time to time Plex offers discounted lifetime deals. I went for it earlier this year. Like the IFTTT deal if an app is so useful to you and you can lock in the price now and forever, I say go for it.

For IFTTT fans the Pro monthly price is now in your control. Definitely worth checking out if you’re into smart home automation, and other things applets can automatically do for you.