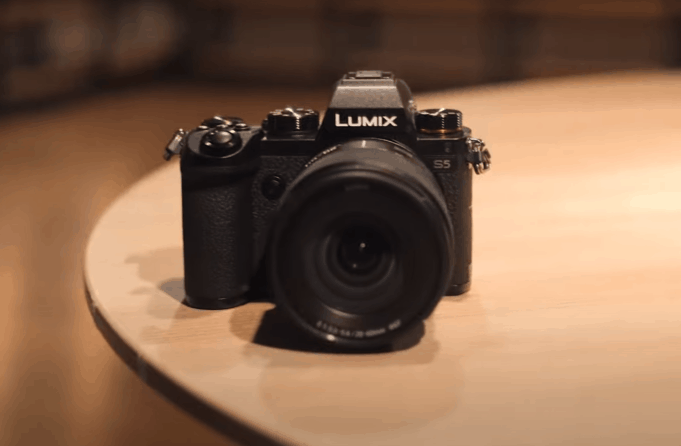 Panasonic today has unveiled the Lumix S5, its latest in a well-regarded range of full-frame mirrorless cameras. The S5 is the least expensive model coming in at $1,998 USD and slotting under the higher priced S1, S1H and S1R.

Those who follow the camera market know that full-frame sensors have become all the rage lately. My suspicion is that has to do with running as far away as possible from smartphone cameras which typically can’t (yet) match the capabilities afforded by these pricey full-frame cameras — and, to boot companies can price them above the $500-1,200 USD price range typically found on phones from Apple, Samsung, Motorola and others. That way while sales volumes decrease because of the smartphone at least camera manufacturers can try to offset the impact with higher margins.

At only 1.39 pounds the S5 is far lighter and also smaller than its S-series siblings. That could come in handy for not only vloggers, but also for those who frequently travel (in a post COVID world?) and want to keep their kit light.

Specs-wise most of what you’d expect is here in a modern day mirrorless camera focused on video shooters: 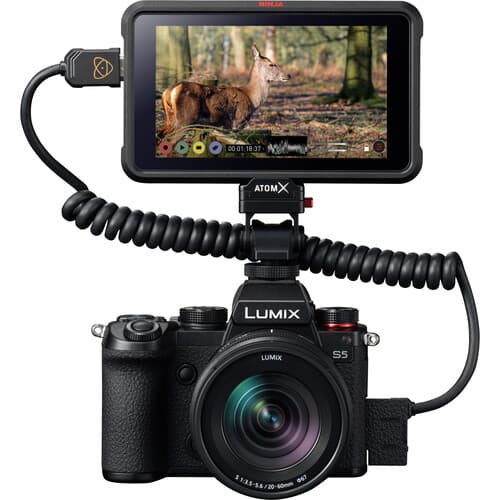 All of this looks pretty good to me. I’m not sure if the S5 supports anamorphic mode like the GH5 does. If it doesn’t, however, that’s probably not a deal breaker for most shooters given its rarity — but boy does it look good and it would be nice if the S5 did support the option. (Update: good news… anamorphic recording is indeed available).

In terms of the mount, as we’ve already seen with the S1, S1H and S1R Panasonic has opted again for the new L-Mount Alliance L lens mount. Thankfully many adapters are available so if you’re invested in Canon glass you needn’t worry too much. My guess going forward new full-frame lens mounts like the L mount and RF mount are the way forward for companies like Panasonic and Canon respectively.

Like the GH5 you’ll find dual SD card slots on the S5. This is all well and good by me given their low cost and wide availability. Chances are you already own some and you’ll be ready to shoot right out of the gate. Nice.

Early reviews seem positive and in the case of CineD glowing: 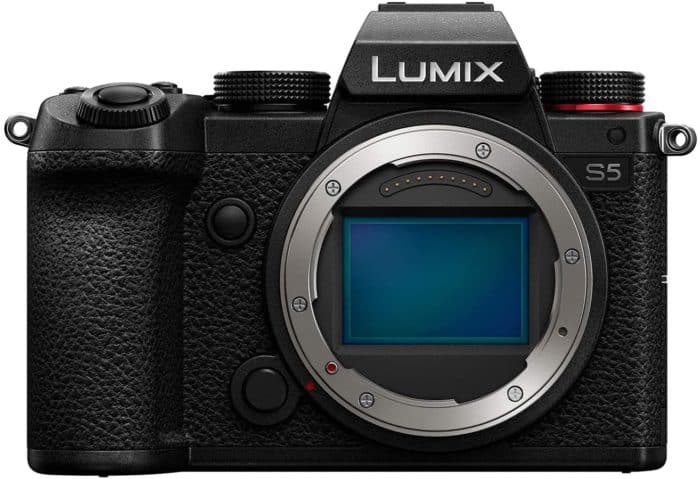 Interesting point above on that review from CineD about “joy” of using a camera. That’s something specs don’t capture. It’s exactly how I feel when shooting with a GH5 or RED Dragon. I love the controls, the weight of those cameras (for different reasons of course) and just overall how it feels in my hands when I’m working with Loni Stark on a video project for Stark Insider. My experience with Sony mirrorless bodies has been, unfortunately, not the same. Ergonomics are important, and difficult to navigate menus and poorly placed controls and non-articulating screens generally don’t win people over — even if the specs and image do. Then again, I still own a Sony a600 and find it takes superb photos, and have become accustomed to its quirky Sony-ness over time.

I once rented the a7 III (paired with those fabulous Fujinon MK E-mount zoom lenses) and found it to be an incredible performer for the price. However, my test was a little unfair. I shot the exact same scenes twice, once with the Sony and a second time with the RED Dragon. Comparing in post in Premiere Pro I liked the Sony footage, but I absolutely loved the RED footage — and that’s ultimately what we used for the epilogue to The Flintstone House short doc. Like I said, not exactly fair as the RED is about five times the price. Meanwhile, the EOS R is a compelling proposition especially at its new lower price. I like that the EOS R has a screen on the top plate (the S5 does not). Also, at 30.3MP the Canon offers a larger sensor over the 24MP found in the S5. That difference could come in handy for those who also need to capture high quality stills. I’m thinking wedding filmmakers on this one.

YouTuber Gerald Undone has some interesting things to say about the S5 in this video below, especially noting how Panasonic did not cripple the camera in in an attempt to avoid cannibalization in relation to its pricier big brother, the S1H. Given that the S5 has most of the key features from the S1H and ships with V-Log ($200 value), a 3 year extended warranty and free Sigma 45mm f/2.8 lens (as part of Panasonic’s pre-order promo) you kind of get the feeling it’s the better buy.

What about the Panasonic GH5?

Another camera to consider?

How about the still awesome Panasonic Lumix GH5 from 2017?

You just somehow knew I was going there. Sure, it’s APS-C and not full-frame. But it’s got pretty much everything else including the legendary Panasonic IBIS, dual SD cards, V-Log and 4K 10-bit 4:2:2 and anamorphic support. I suspect the S5 will perform better in low light and likely take better photos (24MP sensor vs. 20MP on the GH5), but for pure video users what more I wonder does the S5 offer? It could very well be the image itself. And if the S5 does produce video footage that looks close to the Varicam or EVA 1 then that would be reason enough to favor it over the GH5 to be sure. So I need keep myself in check here.

Net-net: of all the full-frame models in the last year or so I’m scoring the Panasonic S5 as the top dog.

I’m of course reserving final judgement until we actually shoot a project with one, but I’m basing that on early videos I’ve watched and the early reviews. And, of course, we know that price. $1,998. Pretty great, given we’ve seen very expensive (and very capable) cameras like the Canon EOS R5 sell for almost twice that. Besides I don’t believe most of us need 8K. So why not save a bunch of money and put it towards lights and lenses and other accessories and just put down a pre-order for the S5 (Amazon).

Now we await the Sony a7S III which will surely be quite competitive.

And will there someday be a Panasonic GH6?

Either way there’s so much choice out there for YouTubers, vloggers, filmmakers and other content creators that there’s bound to be something that will suit your needs.

Update: I’ve cancelled my Canon R5 order. Panasonic S5 incoming — to replace a GH5 for Stark Insider video projects. At this price point the S5 is just looking too good not to jump.

Update 2: Panasonic is coming out strong with this launch. Not only do you get V-Log included (a $200 option for the Lumix S1!), Panasonic is throwing in a free Sigma 45mm f/2.8 lens (worth $549 USD) and a 3 year extended warranty. If you pre-order be sure to go to this official Panasonic “Register a Product” link to sign up for your free lens — you can do this before receiving the camera.

The Panasonic Lumix S5 is available for pre-order and is expected to ship September 21, 2020: