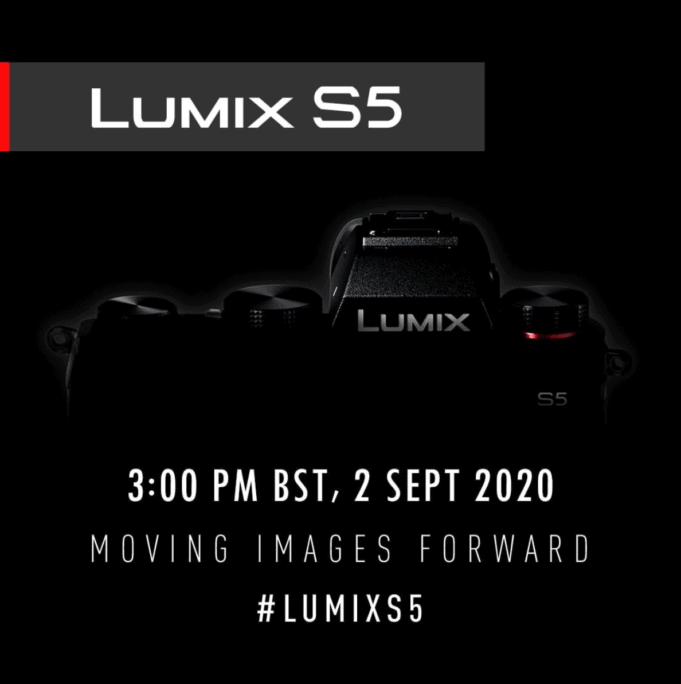 That’s a lot of S’s. Panasonic teased it’s next full-frame mirrorless body which will be unveiled on September 2, 2020.

Dubbed the S5 word on the street is that Panasonic will aim this model at video shooters. Other rumored specs include 4K 60fps and in-body image stabilization or IBIS — something that Panasonic absolutely nailed to perfection in the MFT-based Lumix GH5 mirrorless camera.

We are pleased to announce the LUMIX S5! . The newest full-frame mirrorless camera to join the S-series will be unveiled at an online launch event on Wednesday 2nd September 2020 at 15:00 BST. . We are committed to meeting the passionate demands of all creators through our LUMIX brand, and the new LUMIX S5 is one of the embodiments of this commitment. . Visit the link in our bio for more information. . #MovingImagesForward . #LUMIXS5 #S5 #LUMIX #LUMIXSseries #LUMIXS #LUMIX #Panasonic #FullFrameWithoutCompromise #videography #cinematography #photography #fullframe #mirrorlesscamera #camera #mirrorless #new #announcement #contentcreators #creators

Speaking of the GH5, Engadget suggests that this S5 model could indeed be the replacement for the GH5 which is now over three years old (2017). That could likely mean we’re not going to see a GH6. And would also mean that the world of full-frame is taking over from the old days of crop (APS-C) sensors. If so too bad I say. I love the Super 35 look; plus, cameras that have Super 35 sensors (or close to it) are easier to focus, not to mention less expensive.

Pricing and full specs will need to wait until next month.

Full-Frame Mirrorless Cameras are the IT Thing

One of my theories — and it’s not exactly unique — is that camera companies are running away from the smartphone market segment, most notably the iPhone. That means avoiding the ~$800-1,200 USD price point. Instead, Canon (EOS R, RP, R5), Sony (a7S III, a7 III), Panasonic (S1, S1H, S1R, S5) among others are moving up-market. If sales are being negatively impact by increasingly capable and pocket-able smartphones then you best not compete on their terms. Instead the idea is to make up for lost volume with margin. That means more expensive product. Full-frame sensors are a gateway to more expensive product and further differentiate from smartphone camera sensors in a few ways. For one, because they’re larger sensors they let in more light and typically perform better in low light. Then there’s the detail. Again because of the large sensor more megapixels are captured resulting in more detail than a typical social media ready photo you’d find on your phone — this is essential for wildlife shooters as an example.

For users that shoot narrative and YouTube videos, however, I just don’t get it. Why not shoot on a regular APS-C camera?

I guess everyone has their reasons. People who visit Stark Insider from time to time will be sick to bits to hear I’d again suggest just picking up a now heavily discounted Panasonic GH5. Dual SD slots. V-log for color grading. 10-bit 4:2:2. 4K60. Focus peaking, waveform monitoring, zebras. And on and on. Plus that MFT mount, ideal for adapting various lenses including Canon EF/EF-S (I use a Metabones Speedbooster). Finally, don’t forget the GH5 has astonishingly good IBIS. So good is this feature that you can use cinema glass handheld. That’s really something. I used a Rokinon 35mm for several of the scenes from Crazy or Die a few years back and came away gobsmacked by the GH5:

A short film by Clinton Stark and Loni Stark.

Back to the S5. I expect this model to be popular. If the price is right ($1,999 USD?), it will go up against the Canon EOS RP and Sony a7 III as a relatively affordable, entry-level full-frame videocentric camera. However, if the recent past is any indication I expect the Panasonic to be better; at least better than the Canon. The S-series is an impressive range with professional specs to match, including Netflix certification. I admit, if I wasn’t so heavily invested in Canon EF/EF-S glass and already own a GH5 and Red Dragon, I may very well have started my video journey with the Panasonic S-series and L-Mount system.

One thing is clear: for those in the market for a new video-centric camera the choice out there is welcoming.