Canon today officially took the wraps off its two new high-end full-frame camera bodies alongside a line-up of RF-based lenses. Both the R5 and R6 will ship later this month. Pre-orders are open. All the details can be found in this article here at the succinct Newsshooter site so I won’t repeat them. Rather, as a long time Canon DSLR shooter (EOS 60D -> 70D -> 80D) and now Panasonic GH5 video guy, I’ll highlight some of my thoughts below, most notably focused on the flagship R5.

The price is indeed right.

Many predicted this would be a very expensive camera. Maybe even $5,000+ USD. Fortunately that isn’t the case. Instead the Canon EOS R5 lists for $3,899 USD. That’s the body only. Of course you’ll need CFexpress memory cards. And you’ll likely want extra batteries, and possibly RF mount lenses (which are expensive). On that last point I’ll get an EF-EOS R control ring mount adapter. That way I can use all my existing Canon glass and as a bonus be able to program that ring for additional functionality for my left hand that’s resting on the lens.

This price point certainly puts the R5 in rarified territory, at least by DSLR and mirrorless standards. The Canon EOS 5D IV, which is an old school DSLR featuring a full-frame sensor, now sells for $2,499. The superb Sony a7R IV for $3,498. Panasonic S1H for $3,998 (!).

But… none of those cameras shoot 8K. In fact I don’t know of any that do in this price range?

Perhaps another competitor worth pointing out would be the (still) forthcoming RED Komodo 6K; priced at around $6,000 for the standard black edition. A couple things worth pointing out. The RED is a dedicated cinema camera that records outstanding (and I think best-in-class) Redcode files that are famously easy and flexible to work with in post. If you’re a production company that shoots features and other similar projects I think RED is the way to go. For many others who want the flexibility of a body that also shoots high resolution stills — fashion film and wildlife shooters for instance — it would seem that the R5 comes out ahead, and for less money too. Keep in mind that while perhaps not as good as Redcode, the R5 will record in RAW when needed, but without the efficient compression that RED affords. 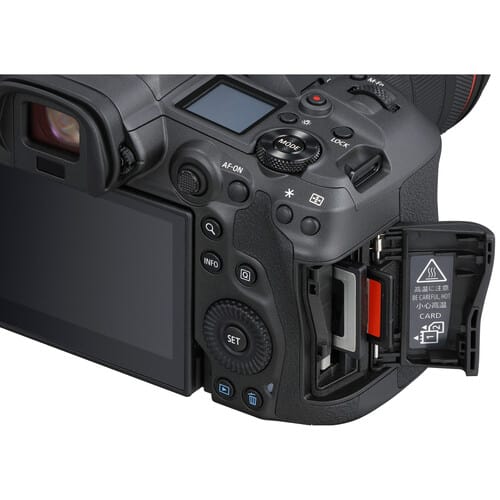 Also on the point of cost. I purchased a GH5 back in 2017. I paid list at the time: $2,495 USD. Now you can get it for far less. That little guy has been a phenom for shooting videos for Stark Insider. Lightweight, built like a tank, and reliable. I’ve written about the GH5 here for many years and if there’s one camera that I’d recommend for video enthusiasts — then and today — that shoots 4K and log and doesn’t break the bank it would absolutely be the Lumix GH5. But here’s the thing. It’s 2020. The R5 costs about $1,400 more than the then new GH5. That for a Canon body with DPAF, IBIS, dual CFexpress, and 45MP full-frame sensor that shoots uncropped 8K. Yes that’s about 56% more money. But look at the specs. And know this is Canon — so the build and functionality and ergonomics will likely be top tier. You can see even more reason why I believe Canon priced the R5 right, i.e. competitively.

This will the first mirrorless or DSLR body I’ve bought since 2017 (the GH5). I don’t necessarily upgrade often. I see spec-chasing consumerism as typically pointless, or for YouTubers. As they say the camera in your hand — usually a phone these days — is the best camera. There’s much more we can improve upon that doesn’t necessarily require a new camera; like composition, sound, story, lighting, set… and on and on. Gear is the last thing holding us back when it comes to the creative process. So I’m not one to rant about pixel binning, debayering, random spec stuff and the lot. Sure some of that might be important for those who need to know the deep tech production info on set. For me, once I’ve gotten to know a camera, the most important thing is to light, expose and then focus and hit record. Just know, that for me at least, everything that comes before that moment is more important: the storyboard, planning shot lists and focal lengths, etc.

Yet… here I am pre-ordering a Canon EOS R5. I admit the hypocrisy. If only I could be a future Canon Explorer of Light!

Ultimately, in the big picture of recent camera history I see the R5 (and R6, but especially the R5) as a generational camera for Canon.

Here’s my take on best use cases for the R5.

Maybe not so great for:

We won’t know for sure until we test it of course, but if everything goes as we expect it’s not hyperbole to suggest the R5 could be as big a deal as the game-changing EOS 5D II (2008).

I’m not quite sure the R5 can yet replace my video shooting combo of the GH5 + RED Dragon. But I’m going to find out. The fact that the 45MP sensor will help me take better photos of Loni Stark’s artwork will be icing on the cake.

Below is the official Canon video on the new EOS R5, R6 cameras and RF lenses. Despite the cringe YouTube-iness and “Canon Explorer of Light” shtick Canon and the team did a good job, especially in light of Coronavirus and shelter-in-place: