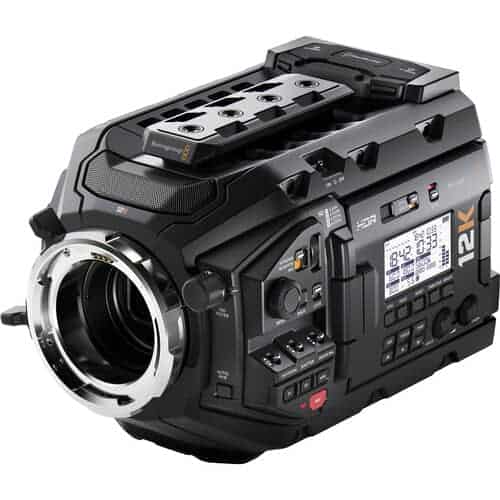 Blackmagic surprised yesterday with the announcement of a new Super 35 12K capable cinema camera (that’s 12,288 x 6480). We were expecting a new camera. But not one with such an insane resolution spec. It seems as though 2020 is quickly becoming the race for more and more pixels in the camera world. I wonder though if this is overblown marketing, and who rightfully needs such high resolution?

Blackmagic gives us a 12K cinema camera, but is the world ready for such high resolution? https://t.co/TbaD3E5ZW5 pic.twitter.com/0jozde85Gz

I suspect green screeners and VFX production houses and wildlife shooters among other niches might see potential here. But for the mainstream cinema buyer I’m having a tough time understanding who this camera is intended for and why they’d pay $10,000 for it. Then again, my perspective is mostly experimental short film, and narrative stuff. So I’m mostly interested in achieving the “filmic” look, and often even dirty up images that come out of my Panasonic GH5 and RED Dragon. I can’t help myself, watched too many giallos.

Blackmagic makes excellent products so there’s no surprise that the engineering inside this new URSA Mini is impressive. Safe to say the technology and implementation are well beyond me and the scope of what I typically write about here on Stark Insider. Suffice to say there’s oversampling, high frame rates (60 fps in 12K wow), interchangeable lens mounts, USB-C ports and the lovely BRAW compression technology that will help tame some of those massive file sizes.

For me, though, a decidedly non-cinematographer guy, I would prefer to see Blackmagic target the sub $5,000 cinema market. For instance, I’d rather see an updated Blackmagic Micro Cinema Camera 4K or 5K with solid ergonomics and an articulating touchscreen. Perhaps I’m being selfish. I shot with a Micro several years back and loved the image — but not so much the handling. Using an adapter I mounted an old school Angenieux lens I bought off eBay. Hand cranking that thing was a blast for shooting 3 Days in Sonoma, when we embraced our inner Jean-Luc Godard for the heck of it.

At $9,995 USD the URSA Mini Pro 12K is pushing into RED territory. You could, for instance, easily buy a well equipped RED Raven (4.5K) or, my favorite, the RED Scarlet-W (5K) on the used market for about the same price depending on the extras included (RED’s minimag memory cards are still expensive). As much as I like the Blackmagic image and the new BRAW, in my estimation nothing beats Redcode. After spending a few years shooting that codec it’s hard to edit in anything else, it really is the closest approximation of “digital film” I’ve yet to discover in shooting video for the last 10 years or so.

Also, in terms of competition there’s the Canon Cinema EOS line in this price range or even less (C100, C200, C300). Sony has a bunch of capable cameras as well (FS7, FS9, and Panasonic too with the Varicam line. Then again, none of those shoot 12K. I’d suggest things like dynamic range and file handling and codecs matter more than resolution. What matters to me may not matter to you, or even most people. I get that. (but I’m sort of right no?)

But is buying into 12K really future proofing?

I guess those that like to future proof will see some potential value in investing in a 12K sensor. The caution here though is almost always the same. By the time the world catches up — in this case, to 12K video — something else will also be in the mix. We probably never could’ve predicted things like HDR many years ago, yet almost all TVs today come with that feature. Same for various connections and how they evolve (e.g. USB-C). So in the future, yes we will likely have 12K as normal at some point, but by then there will be a myriad of other new technologies alongside it that we could not have foreseen, and something like the gen one 12K camera will fall short in some way. All of this to say if you like the prospects of shooting mega 12K files and need the detail buy the URSA Mini Pro 12K for exactly that purpose. For today. Not to fool yourself into thinking it will somehow be future proofed. Lenses last a lifetime. Camera bodies do not.

That’s all well and good, and sort of fun and entertaining (in small doses).

My money though, at least for narrative style projects, is still on the Blackmagic Pocket Cinema Camera 4K, Panasonic GH5 and entry level RED DSMC2 cameras (Raven, Scarlet-W). I find new camera bodies tend to have a very sharp (crisp) digital look. Likely this is the style wanted for high end fashion or commercial spec work. Makes sense, that aesthetic suits that market. For film grain guys like me who prefer abstract looks, and images that are less perfect fortunately there are things like FilmConvert and Lumetri (in Premiere Pro) that can help us de-modernize the images coming out of today’s 4K/5K/6K/8K/12K cameras.

Regardless, thank goodness for feisty and forward-thinking companies like Blackmagic Design (and humble and amiable CEO Grant Petty). Competition is a good thing. And so far as I know BMD is the only one in recent years who have released a new compression standard (Blackmagic RAW) that works well across all major edit systems.

For now I’m sticking with 4K and 5K max. I’ve just become accustomed to working with those file sizes in the last year or so and find them, finally, almost normal, after so many years of working with good old 1080p files from Canon DSLRs. Early adopters and those who absolutely need every ounce of detail will likely find the URSA Mini Pro 12K to be a compelling option for their work.

Next on deck for what is turning out to be an exciting year for cameras: the Sony Alpha A7S III.