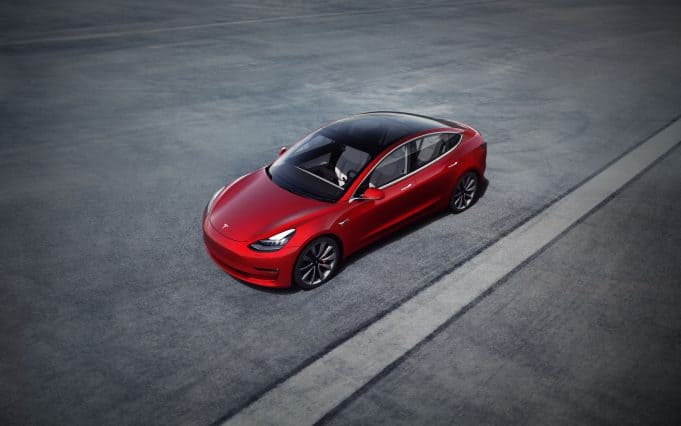 Wouldn’t you know it, Tesla is the only EV company to make the CR top 10 rankings, and, so far as I can tell, this marks the first time Tesla has appeared on the annual list.

The Model 3 — which earned a rather stingy CR overall score of 80 — “proves that EVs can challenge conventional upscale sedans by offering invigorating performance with a high-tech vibe,” notes the article.

Range in particular is highlighted as a strong suit, and an area where competitors significantly lag (in addition to charging networks). But on the downside the ride is stiff and there’s notable wind noise.

All told, an impressive showing for Tesla. Needless to say the Model 3 has been a mega hit. Soon, Tesla buyers will have even more options as the lineup expands further beyond the Model 3, S and X to include the new, smaller Model Y SUV, and upcoming Roadster and Cybertruck.

Other cars making the Consumer Reports top 10 list include:

Per CR, these cars “have some of the highest Overall Scores in their categories, factoring in road tests, predicted reliability, owner satisfaction, and safety.”

While Tesla, and EVs in general, remain controversial in some (crop) circles, of all the cars on the above list, I’d say none has drawn as much ire and online debate as the all new Toyota Supra.

Given that it is largely a BMW with a Toyota badge purists argue that the two-seat sports car is not worthy of the famed name. I say why fuss?

Come on now, the re-born Supra is a phenomenal sports car bargain. All that performance… for a pretty reasonable price tag!? As a guy who once dreamed of owning this kind of car in the 90’s and 2000’s I’m often in shock as to how much goodness is available in today’s automotive market. (see: 2020 Corvette)

Regardless, if I had to choose one of the above top 10 cars — if my incredibly reliable 7-year-old Prius by chance suddenly croaked — I’d definitely go for the Model 3. Commuting here in Silicon Valley is nightmare enough, without the hassles of gas fill-ups, and ICE repairs and maintenance. Being able to charge at home in the garage overnight is a mighty compelling convenience; not to mention the ability to skip SMOG checks, oil changes, spark plug replacements… and on and on. Plus the bonus and icing on the cake: near instant torque and incredible acceleration in a near silent cabin. Not to mention the smaller environmental footprint.

I wonder, in twelve months from now if the Porsche Taycan or other high performance EVs might also make this sort of list from Consumer Reports? I suspect they ought to, EVs are not the future, they are the present. Oh how I wish my Prius would just randomly decide to destroy itself…