Tesla Model 3 is on top.

And all it took was about five months of shipments of its new “mainstream” priced electric car.

Tesla today tweeted a chart depicting market share for the mid-sized premium sedan market segment. There’s no mistaking the trend. From November 2017 through to May 2018, Model 3 share climbs steadily (see red line below): 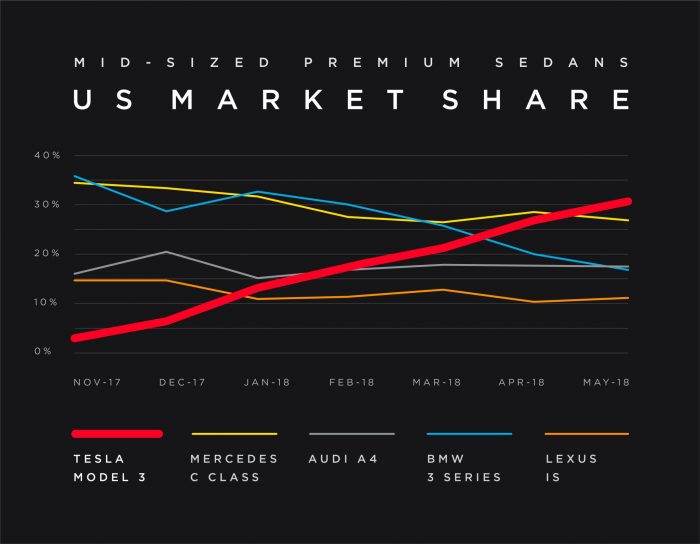 Meanwhile, all four of its major competitors lost share over the same time period. That includes well-known and respected brands including the Mercedes C-Class, Audi A4, BMW 3-series and Lexus IS.

In short, this is pretty amazing.

To have a Tesla model grab about 30% share in such a short amount of time perhaps tells us about the future of consumer’s thoughts about battery-powered cars.

Of course, there could be other factors at play here hurting this segment, and it might be a rush to judgment to write off the Germans and the Japanese auto-makers too soon. They too have electric vehicles, already for sale, with more in the pipeline. Tesla is clearly first, however, we know that doesn’t guarantee long-term, sustainable success — recall that Microsoft was late to the graphical user interface race, and that still didn’t turn out too badly.

Yes, there’s cash flow and production concerns. But if I were a betting person, I would not bet against Elon Musk.