The Suspiria remake is on the way. And today Amazon Studios has finally released a teaser trailer. See below for 90 seconds of delightful weirdness, moodiness and creepiness. Bring it! Suspiria (2018) is scheduled to hit theaters November 2. Jump down to see 10 things I noted about the trailer.

Dario Argento’s original is, of course, a timeless classic. His innovative use of colors, scoring (Goblin), and violent, yet artistic, death sequences forever changed the genre. I previously wrote here on Stark Insider that I was skeptical of a remake. These things typically don’t turn out well; they’re either tired retreads with nothing new to say (Psycho) or they’re just not up to the original’s… well, originality (Halloween).

However, at least based on this trailer, I’d have to  say Luca Guadagnino’s Suspiria is coming along rather well. In fact this film might turn out to be quite good.

10 Things of Note About the Suspiria Trailer

Color palette muted. Argent’s 1977 masterpiece is renowned for its stlyish use of bright colors. Pinks. Blues. Purples. A cinematic palette for the ages. Here is almost the opposite. Muted browns and de-saturated colors seems to be the artistic goal. I like it.

No dialog. In this trailer you’ll see a lot of confused and frightened stares. You won’t hear any dialog though.

Awesome typography. The title Suspiria is introduced one letter at a time, before the whole word is revealed. The font is so, so perfect. 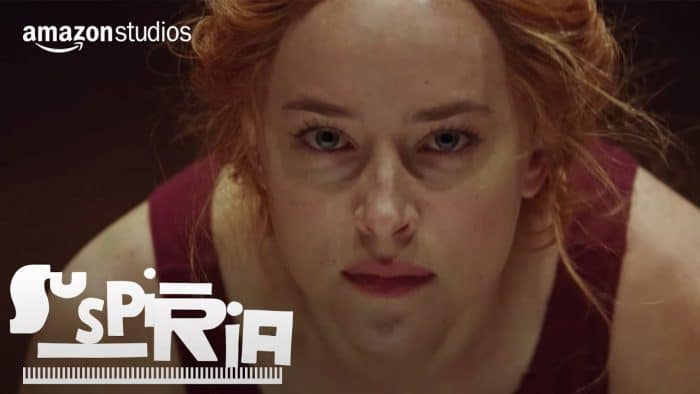 Someone is missing. There’s a ballerina. Witches, of course. But it seems in this version there’s an abduction of some sort. Look to 0:40 of the trailer to see an old man studying a MISSING poster.

Doesn’t look to copy the original. Speaking of plot and story (screenplay by David Kajganich), thankfully we know this is not a shot-for-shot remake like the dreadful Psycho was a few years back. And I’m not so sure this is even a re-telling of Suspiria. So that’s interesting, and I think a good thing.

Soundtrack is very promising. Almost Blade Runner 2049-ish? I’d give the scoring (music by Thom Yorke of Radiohead, score performed by London Contemporary Orchestra) of this trailer an A+. No jump scares, just pure, 100%, awesome mood.

Quick peek at diary entry looks like it might tie the Three Mothers trilogy somehow. Check out 0:34. There’s a few pages shown from what looks like a journal. In all-caps we see some of Argento’s famed “Mothers”: MOTHER TENEBRARUM (Tenebrae), MOTHER LACHRYMARUM, MOTHER SUSPIRIORUM (Suspiria), MOTHER MARKOS. “Bigger than everything and more important.” Hmmmm… 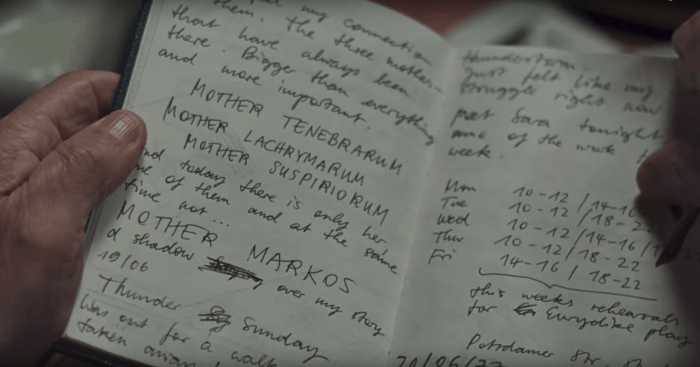 Dakota Johnson as ballerina Susie Bannion. So far this looks like a solid casting choice. Granted, again, there’s no dialog, so hard to gauge a performance based on just this trailer. Still, she looks right at home in this kind of dreadful atmosphere. With equal doses of confusion and fear, perhaps reminding me a bit of Jennifer Lawrence in Darren Aronofsky’s Mother!, she could be the perfect proxy for us, the viewer. Plus: Tilda Swinton as Madame Blanc projects evil and awkardness with nary saying a word.

Cinematography looks top notch. Camera work looks to be stellar. Nice composition. Nice movement. Sayombhu Mukdeeprom shot Call Me By Your Name (2017)… and we know that one turned out pretty well. 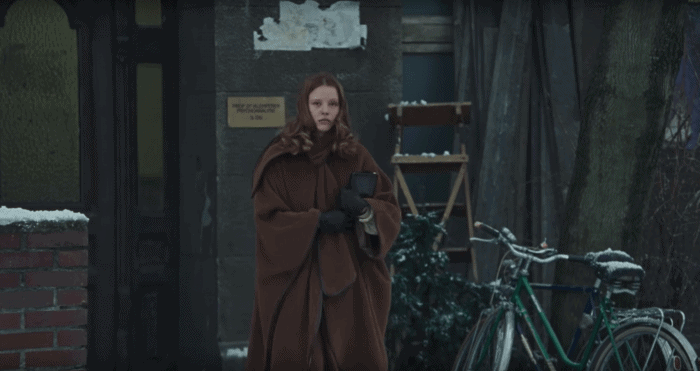 Finally, plot-wise this film (at least the trailer) looks pretty much incoherent. In my books that’s a good thing. I’ll take mood and aesthetic over Hollywood storyline any day of the week, even if that day means a coven of witches will mess with my Trader Joe’s run.