Ever wake up only to discover fish in the fridge?

I know. Cliche! But, we’re on the last short film from the “Stark Insider 2017 Short Film Collection” (rolls right off the tongue), and we were bound to end off on an everyday scenario, for better or worse.

In this installment, Fish. In. Fridge., Loni Stark awakes only to discover fish in the fridge. Or so she thinks.

Something happens. And then something else also happens.

To be clear: no fish were harmed in the shooting of this film.

There are five short films in total: 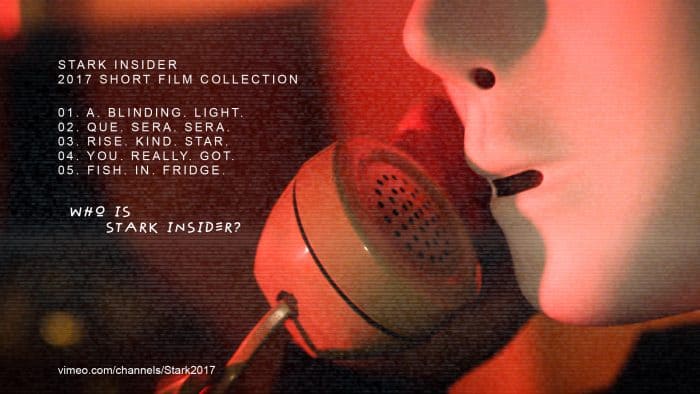 We took about 20 ideas — dreamt up mostly while I was in the local gym’s steam room while listening to obscure 80s new wave from Canada — that I hastily wrote up in Microsoft OneNote, before whittling them down to a manageable number that we could shoot and edit over a few months.

The idea was to celebrate film. Fittingly the prologue short film, Past. Present. Future., came out during the Mill Valley Film Festival, one of our favorite events here in the San Francisco Bay Area. Being an arthouse film buff, I’ve snuck in plenty of obvious and not-so-obvious references to some of my favorite directors, films and actors.

Shooting these shorts — or vignettes, or experimental pieces, or arthouse things — was a good learning experience. For the first time we tried to hone our abilities with lighting, blocking and camera angles; more so than if I were shooting a backstage video or travel video that we’d normally run on this site. Each installment is filled with, if not outright errors (bugs!), at least little things I’d change if I were to do it again. That’s great. Because all we can hope for during the creative process to to at least participate. Learn from it. And before, in the words of The Kinks, doing it all over again. Yes, back where we started. Same as it ever was.

Next time you get a new camera, a new lens, or some sort of new techy accessory (gimbal, drone, etc.) maybe consider doing the same. Buy a cheap neon rope light on Amazon. Or make your spouse wear a weird blue wig. Or have her put make-up on and head to Union Square dressed as Harley Quinn. Whatever the case, I find it all the more interesting than shooting flowers or random trees in a park or test charts. Why noy (try to) be creative and go for it!

Thanks for dropping by. This concludes the Stark Insider 2017 Short Film Collection.

Please remember to exit through the gift shop.

A Stark Insider Original featuring Loni Stark
Ever wake up only to discover fish in the fridge?

NOTE: ** NO FISH WERE HARMED IN THE MAKING OF THIS FILM **

[Thank you: Loni Stark; Citadel Art Studios; and all the little stuffed animals who worked long hours without complaining about food or sleep.]