Shooting wasps is an exercise in patience.

That’s the first thing I learned.

It’s also an exercise in liberal sunscreen. Squinting. And, waiting some more.

I now have utmost respect for those who stake out exotic locales and spend hours upon hour awaiting the perfect shot of that Chestnut-Mandibled Toucan. And here I am, just trying to get a few basic shots of some wasps in … my backyard. Sigh. Live and learn. Or, in this case, shoot and learn.

I recently sold my RED Raven, a decision I’ve come to regret. Too hasty. Should’ve practiced more with it, and given my skills time to improve. I’d get there surely — or at least have filmic adventures trying. It was a bit of a budget buster though, even though it’s RED’s entry level camera. Like, $850 for a proprietary 128GB card.

Still, with Raven gone, I wanted something better than plain old 8-bit files, like the ones that come of the C100 and 70D and 80D DSLRs. Color correction and grading is a focus area for my Stark Insider videos this year and into 2017.  With 10-bit files, of course, there’s more info and more bits of color to work with in post.

It’s a quirky little camera. Definitely tiny too as the name suggests. But I’ve discovered it’s actually pretty good. Especially given you buy the body for a mere $995 (USD) — that borders on absurd relative to cinema camera prices, and gives you tremendous bang for the buck. It’s like a sequel to Blackmagic’s hit, the Pocket Cinema Camera. You’ll find those, along with the micro, frequently used as POV or crash cams on many Hollywood productions. I suspect when rigged out correctly with proper glass they’d do just fine as “A” cams on indie films.

What I like about the BMMCC is that I can throw it in my bag, and hardly notice the weight. Just run-and-gun per usual with my Canon C100 II — quite a bit more expensive that the tiny Blackmagic, but prices have been dropping and the C100 II now goes for “only” $3,999. And, then, when I have extra time, and want to snag some cinematic stuff, I can pull it out, attach the Video Assist or Ninja Blade (though this monitor won’t work for 60fps slow motion) and use any of my Canon glass, thanks to the Metabones four-thirds/EF speedbooster adapter. Power comes from standard issue Canon LP-E6 batteries. I’ve got a million. They’re cheap, and they almost grow on trees they’re so ubiquitous. After ten years of shooting video I can pretty much guess that you too would have a bunch of Canon LP-E6 and Sony NP-F550/F570 batteries scattered around. Safe bet.

It was time to head to the yard and give the BMMCC a go.

I have no cats or dogs or children. So it would be wasps. It’s the only moving thing (well almost, as I discovered thanks to a special guest appearance in the above test video) around me aside from my wife Loni Stark. And she prefers the occasional break from camera experiments.

Turns out wasps love lavender. We’ve got a bunch of it in the yard. That’s why I think it smells like a giant bar of artisan soap. Wasps love that stuff. They typically start at the base of the flower, and work their way up, before darting off to the next one. They move very fast.

I setup the BMMCC and began sniping them. Standing around, not too difficult, right? Well, there’s the bright California sun. Then there’s my back. And my knees. Getting low gets you into all kinds of unnatural positions. Again, kudos to the pros who do this for a living.

I had two goals in mind for this little test:

I’ll admit I was expecting the BMMCC to be quirky to use. It wasn’t. Powering up is lickety split. Menus are simple. The buttons take some getting used to, and you have to use an external monitor since one isn’t built in, but after an hour or so I had the basics down. 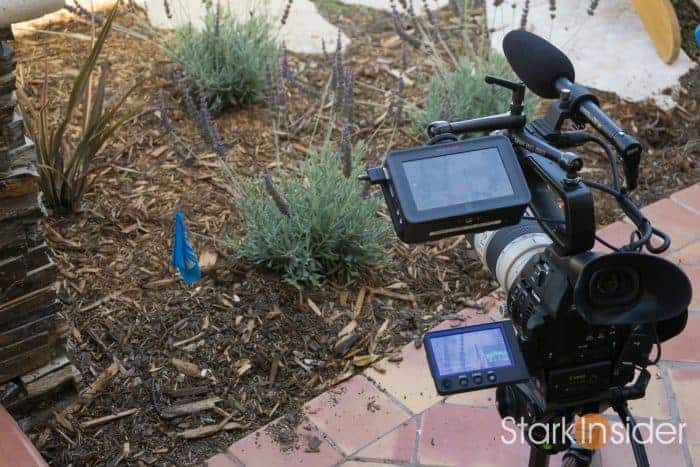 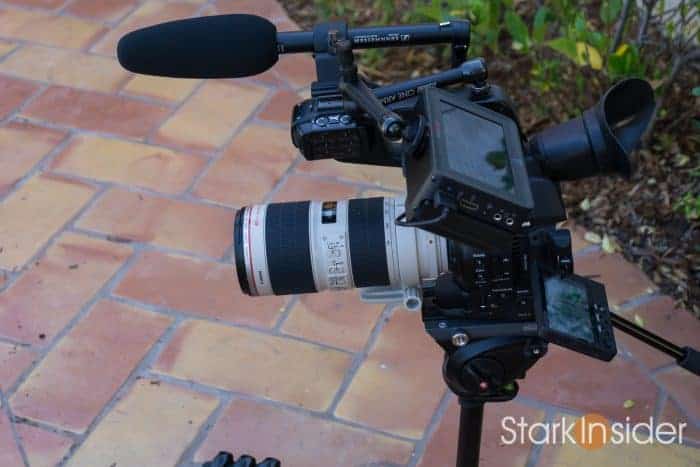 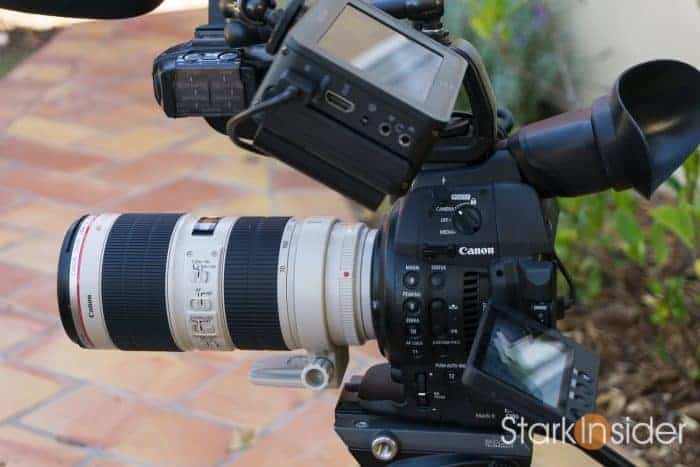 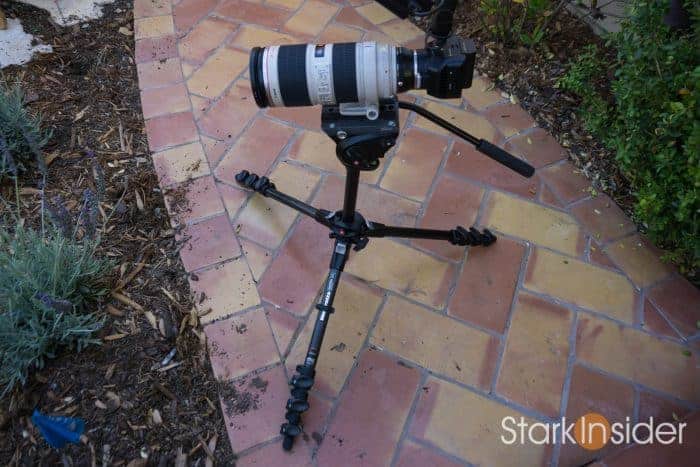 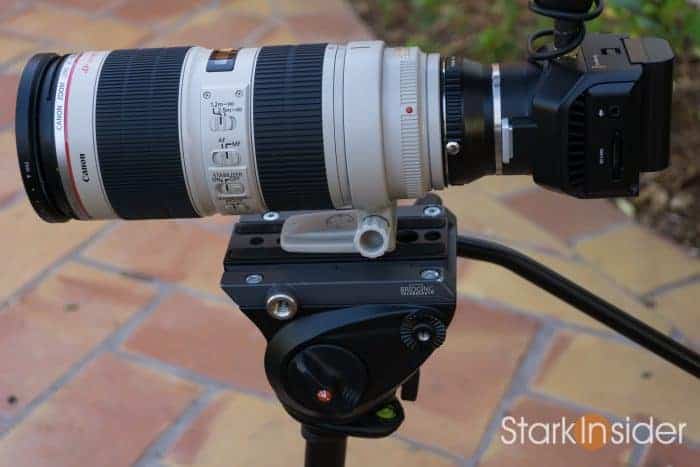 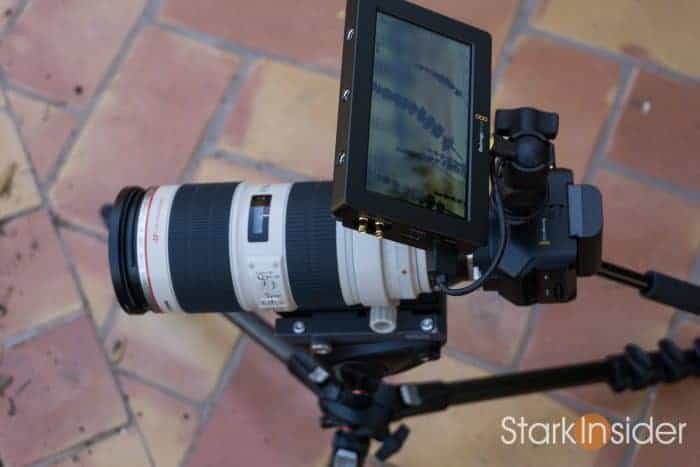 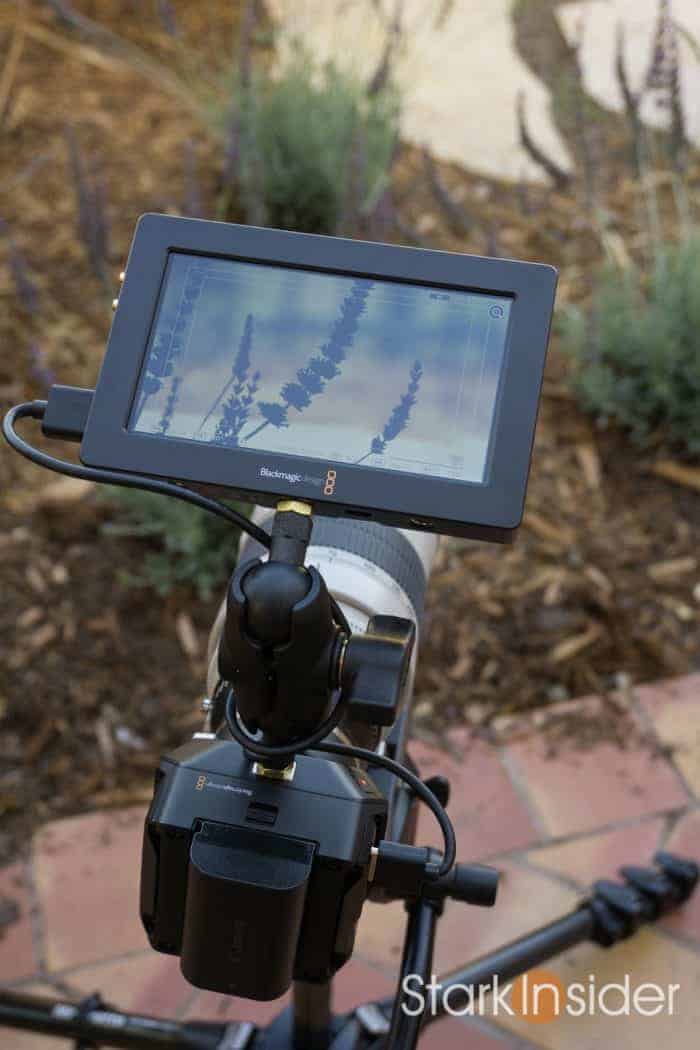 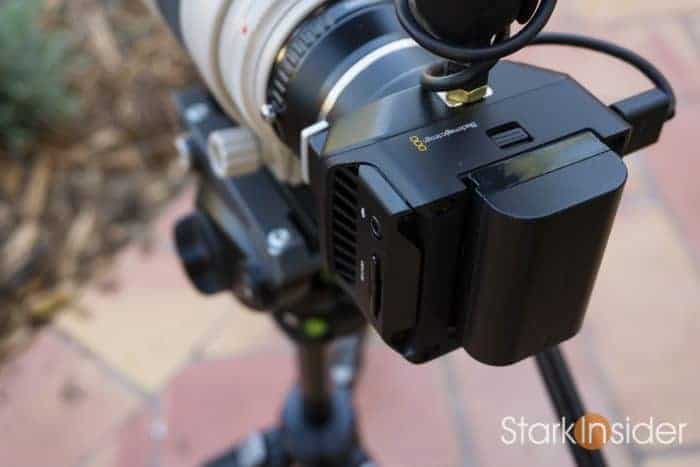 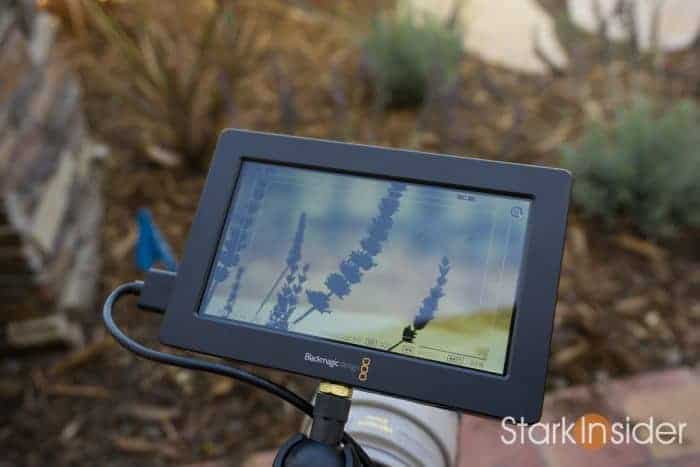 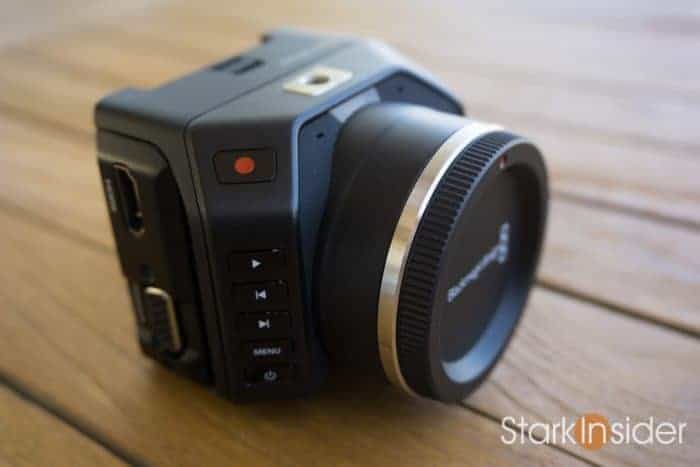 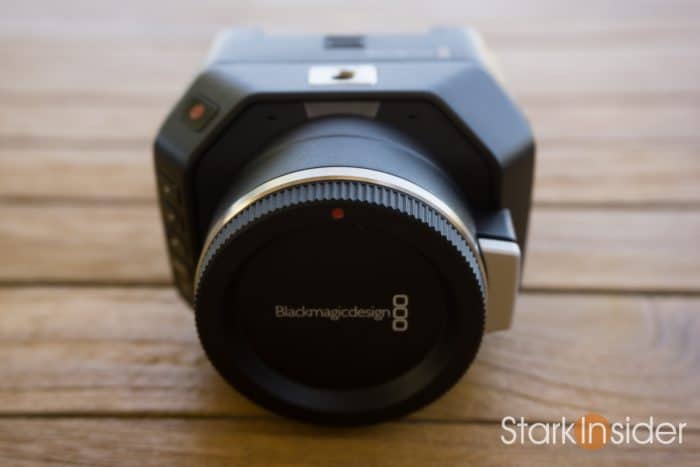 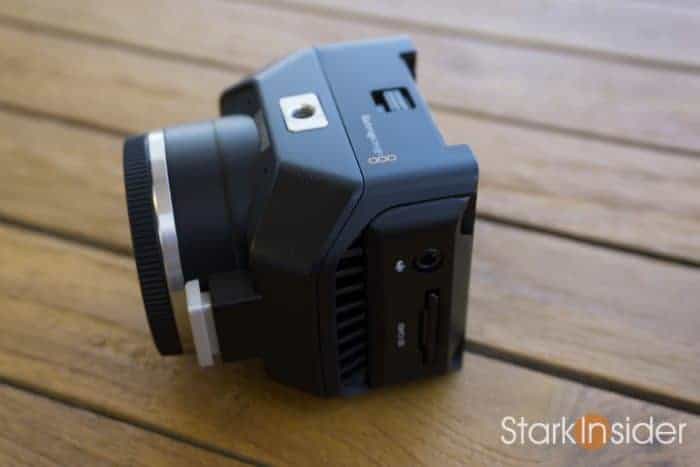 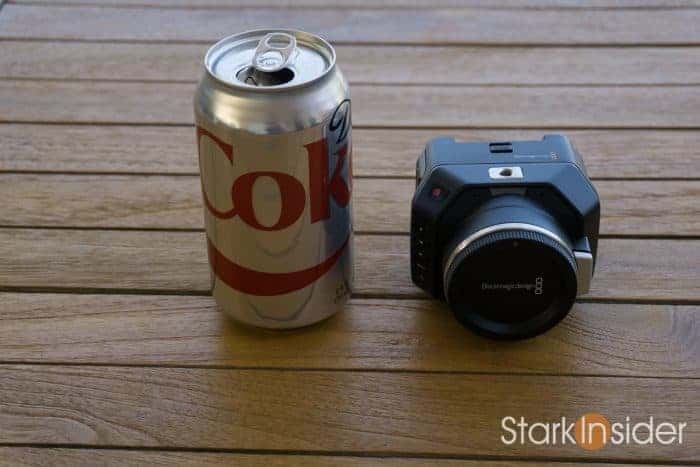 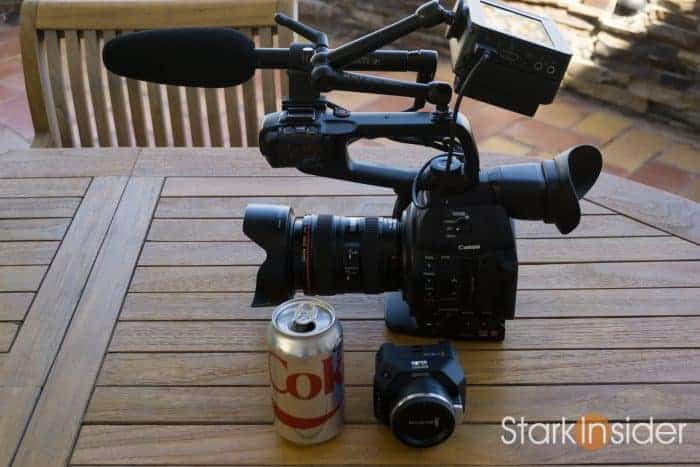 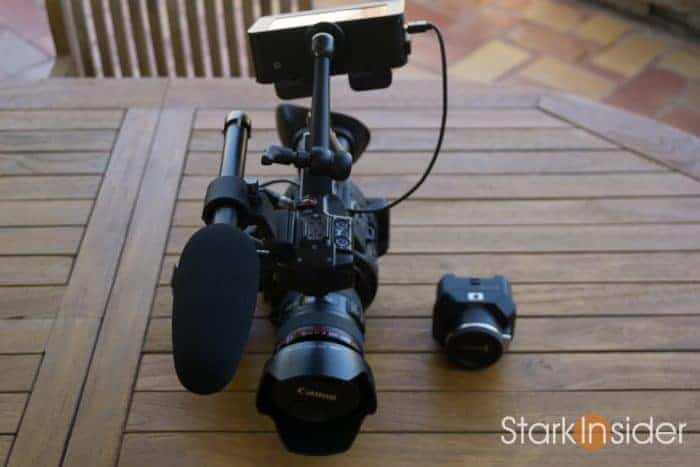 How did the BMMCC compare to the Canon C100 II?

Watch the video and see what you think.

Beware pixel peepers: this is not a scientific test. Settings are all over the place. As our compositions, and time of day (by a few hours). However, I did use the stellar Canon 70-200mm f/2.8 telephoto lens on both cameras. For the Blackmagic I had to use a Tiffen variable ND, whereas on the C100 I could use the internal ones.

Aesthetic is what I’m mostly after. I love images that look like film. Razor sharpness?! Nah. Too digital in most cases. Though I do appreciate this is important for landscape/travel videographers. For me, I’ll take grain — film-like grain — any day, and, especially, that beautiful motion that some cinema cameras can offer.

More soon as I bring these cams out to the streets of San Francisco. While I’d love to fill up my RAID with wasps and lavender I should probably get back to business somewhere more in keeping with what we’re doing here on Stark Insider. Ah, but that fragrance in the air!

For now I’m thinking this little cinema camera will satiate my desire for high bit-rate files with film-like aesthetic. Hopefully I can get back into the RED game sometime in 2017 once I’ve further honed my chops.