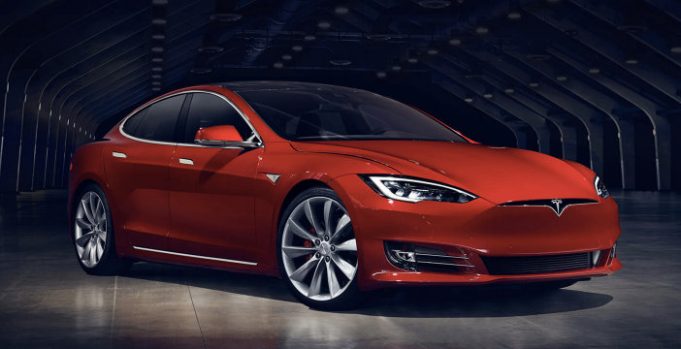 How ludicrous can Elon Musk get?

Today’s announcement is, once again as we’ve come to expect from Tesla, mind melting. How on earth can a four door sedan with ample luggage capacity and a roomy cabin possibly put up these kinds of performance numbers?

And yet: Model S P100D, with a rated 0-60 time of 2.5 seconds — based on a motor equivalent to 603hp. That’s ridiculously, mind-boggling fast. “The quickest production car in the world,” says Tesla. Ludicrously ludicrous indeed.

Thanks to a new, beefier 100 kWh battery the P100D can not only sprint 0-60 toe-to-toe with the likes of the million-dollar (and now unavailable) LaFerrari and Porsche 918 supercars, but has upped the range to 315 miles. More speed, more range. What’s not to like?

Well, for one, the price. Though not quite a million-dollar car, if you want to be the hipster of hipsters in Silicon Valley these days, it will cost you about $135,000 for the P100D.

It will be interesting to see how far Musk and Tesla take the car-as-a-software-upgrade business model. While the battery upgrade does require a physical replacement, many software upgrades can, and are, made available remotely with no need to bring the care into a service center.

There’s two ways to look at this: (1) Tesla is crippling its cars and locking features that should be made available to buyers from the get-go; or (2) Tesla is enabling would-be customers to get into a car for a reasonable price, and then offer the flexibility to upgrade in the future when the need and/or budget is right.

I’d vote for the latter.

I suspect we may see more of this in the future, not only from Tesla, but other manufacturers as well. If you think back to Economics 101 class, you remember supply/demand curves and marginal profit curves. Companies are always trying to maximize profit of course. Amazon can do that by dynamically altering pricing on the fly based on huge amounts of data and consumer buying information. Tesla can do this by offering a la carte pricing.

If you own a Tesla there’s a strong possibility that the car sitting in your garage can do a whole lot more. You just need to “unlock” various upgrades. Pay as you go. In many senses this is similar to the in-app purchases we see on the Google Play Store or Apple Store.

About that 0-60 Performance Thing…

Tesla heavily promotes 0-60 times. Because of the phenomenal torque levels afforded by an electric drive system, this makes sense. Of course, there’s more to the story, especially if you’re a sports car aficionado. Things like 1/4-mile numbers are important. So too handling in the form of grip and g-force.

No question the P100D is a beast. Take it on the track, and pit it against the LaFerrari or Porsche 918 or even other high end modern sports cars from MacLaren and Lamborghini and I suspect after several laps the whole story will reveal itself. Note, for example, the top speed of the new Tesla is “only” 155mph, a stat that pales by comparison to even basic sports cars.

Still, that in 2016 we’re even talking about a 4-door sedan in this rarified company is testament to the monstrously big dreamer Elon Musk. Dreams that seem grounded in actual honest-to-goodness execution.

Yes, Tesla is still losing money. But let’s hope buyers scoop up the P100D in droves. Not only will it help fund the entry-level Model 3, but it will pave the way for an innovative, exciting automotive future.