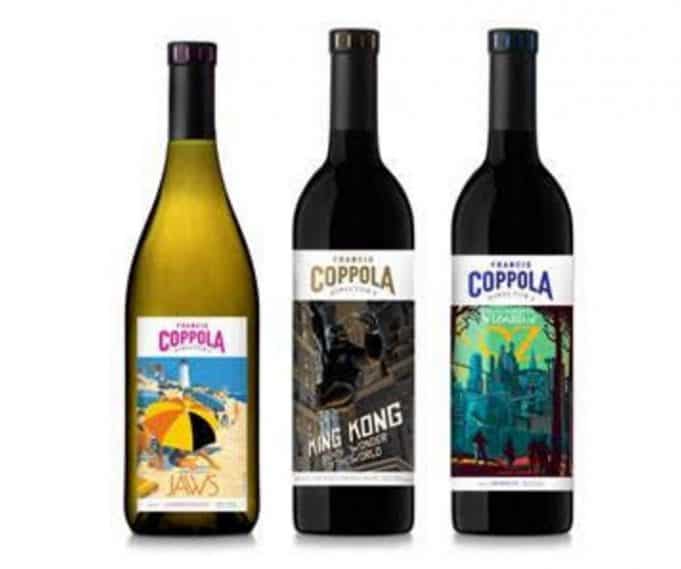 Coppola Winery revealed three new wine labels today. Granted, not especially remarkable news. This happens all the time. Wineries partner with an artist and produce something intriguing, something artful and colorful designed to grab our attention. But what made this email stand-out from the pack is that the labels feature artistic renditions of three classic — “exceptional” — movies:

The film-themed labeled are part of Francis Ford Coppola’s “Director’s Collection” which have been around for years, and have typically employed catchy and/or unique label design of some sort. This particular set is entitled “Director’s Great Movies” and includes a 2015 Chardonnay, 2014 Cabernet Sauvignon, and 2014 Merlot.

Coppola says in the email that he first met the artist Laurent Durieux when he was approached with a poster he had created for a Godfather film. “I immediately saw the passion in his artwork and thought his posters would transform into great wine labels for my Director’s wines, giving the brand a more vibrant and recognizable movie tie-in.”

I like the three picks–Jaws, King Kong, The Wizard of Oz. Classics, definitely. Though I might swap King Kong for something from the German expressionist period (one of my favorites) such as the best vampire adaptation of all, Nosferatu (1922). How would that be for a conversation starter at your next dinner party?

So are these wine labels kitsch? Or cool?

Like a lot of us, I’ve always been drawn to a wine label. It is, after all, part of the story. Typically, though, I believe a super fancy, or over-the-top artsy label may be a red flag of sorts. If the wine can’t sell itself, turning to marketing and artistic labels surely indicates that the product may not necessarily be of the best quality? Not necessarily true. But a feeling I sometimes get when scanning the wine wall at the local store.

Winemaking and filmmaking are two great art forms … In both cases you have to start with top notch raw materials — whether it’s the land or a script.

What might be even cooler is if Coppola were to create a trio of labels based on his own films. In reality probably too self-serving. But if I were to choose the three, it would include:

Apocalypse Now (1979) – between this epic film and Werner Herzog’s impossible Fitzcarraldo (1982), proof that true art can emerge from the most difficult (and bizarre) of sets.

The say you should never judge a book by its cover. Probably true for wines too.

Nevertheless, who said we couldn’t have fun every now and then?

It may be silly. Even blasphemous to serious oenophiles who prefer their labels to feature large, serious scripted fonts. But what the heck, I might just have to pick up some of these. Film, art and Sonoma wine. Retro-futuristic chic. All sounds good to me.