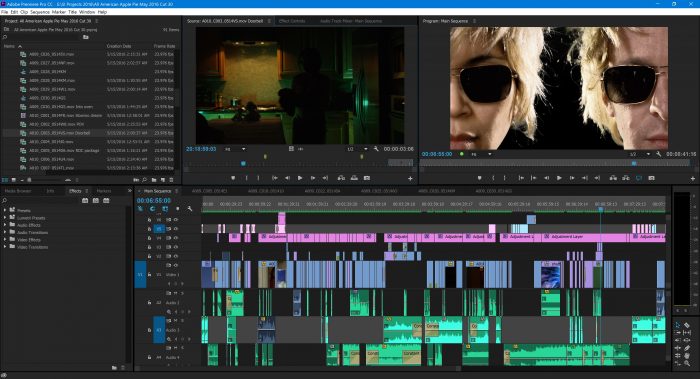 What does a scene for a short film feel like before sound editing?

I took “A Surprise Delivery” from my short All American Apple Pie (full video at bottom of post), and was curious to know how the original footage looked and sounded before the mix.

I wondered how different it would feel without the extra processing and effects. So I created this before and after look at the same 80 second scene without and then with the audio layers applied:

WATCH: Sound Mixing – Before & After

The “before” footage is straight out of the RED Raven without any color grading or sound editing. Just straight-up Prores clips (encoded from R3D files).

The “after” footage has some Lumetri Color tweaking applied (Adobe Premiere Pro), as well as various layers of sound including ADR (Loni’s dialog), sound effects, foley (which I recorded on a separate day), and soundtrack.

Diving into sound is a new thing for me here on Stark Insider. Normally our videos are run-and-gun. Audio is picked up via shotgun or lavalier mics for the most part.

In the past I’ve typically added music, and, on occasion, simple sound effects. With All American Apple Pie — my first time shooting on the RED Raven camera — I used none of the audio out of the camera. Only Loni (aka the Celebrity Chef) had a live mic, but that was only for the cooking demo parts — everything else is dubbed, and/or added to the mix later.

Sound editing is a relatively new world for me. And I have lots to learn. That, plus lighting, color correction, editing, and so many other disciplines that I hope if I improve will eventually reflect in the quality of Stark Insider videos. Time will tell, of course. Technical skills aside, though, my ultimate goal is to get better at the 4 pillars of story-telling (People, Place, Purpose, and Plot), and to at least try to ensure that personality, quirky or otherwise, always shines through.

For now, I like that this new camera, as tricky as it is to use for me (and it’s been a struggle so far to be sure), is pushing me to up my game.