I think we’re a long way from Vienna.

Bizet’s Carmen has been re-imagined for the stage and is now playing San Francisco Opera. The results are visually spectacular — if not deliciously controversial. Indeed, summer is hot.

Six 1980s-era Mercedes Benz model cars are among several highlights of Calixto Bieito’s crackling adaptation. Other notable visuals and updated themes include a stunning, 20-foot tall silhouette of a fighting bull (emblematic of the iconic billboards found alongside the Spanish countryside), “gritty naturalism”, and a calculated aversion from the “cliches” prevalent in the original. In other words: this is a Carmen for the next generation. 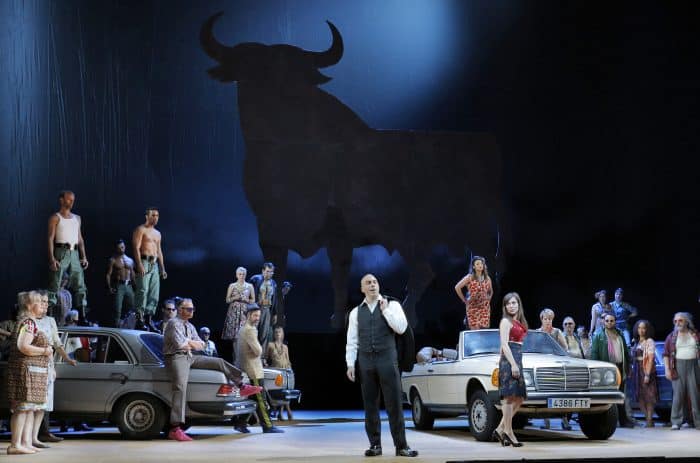 In this Stark Insider video feature, join me as I go backstage at the War Memorial Opera House. There I meet up in the dressing room of Carmen herself, beautiful mezzo-soprano Irene Roberts. She notes that the critical response to Bieito’s daring adaptation is very similar to the ones found in the original production in 1875.

Thanks to Lori Harrison, we also get the interesting backstory on those cool Mercedes Benzes seen on stage.

Also see: Broadway Under the Stars: From Baja beaches to Sonoma ruins, the remarkable story (Video)

Calixto Bieito is seen in some corners as a “bad boy” of sorts when it comes to Opera — he pushes the envelope, and perhaps disenfranchises the establishment along the way, not unlike you might find, say, with some of today’s auteur film directors (Darren Aronofsky, Nicholas Winding Refn).

“Tacky, tawdry, or tasteless?” asks the Los Angeles Times, before suggesting his Carmen re-imagining is “nothing of the sort.” He may rattle cages, but in the end I suspect that can only be a good thing. After all, famous stories (and operas) may stay true to their roots, but those who tell them surely must find alternative ways to engage new audiences, to evolve their artistic presentations, for better or worse. To do otherwise, would be to surrender to the status quo.

Those interested in something truly special this Independence Day weekend, may want to head to AT&T Park. On July 2, SF Opera and the San Francisco Giants are presenting a live simulcast of Carmen (“Opera at the Ballpark”). A live feed of the show at War Memorial Opera House will be streamed to the park on a 103-feet wide screen with concert quality audio. Best of all, the event is free (you need to register here). Note: the production contains violence, and nudity, so parental discretion is advised.

Meantime, join me backstage at the War Memorial Opera House, where I soon find myself cloaked in mystery.