This has to rank as one of the country’s most incredible arts-related stories.

It’s an adventurous narrative. An outdoor theater among ruins? I can only make one smile. A glimmer of hope, perhaps, that there is room in this world of viral videos, emojis, and hyper-short attention spans for something more rustic, something that returns us to the good old outdoors. To grassroots passion. And, maybe best of all, to community building.

Broadway Under the Stars — a show produced by Transcendence Theatre Company — incubated in the most unlikely of places: the Baja. It was there, in completely random and serendipitous fashion, that Amy Miller and Brad Surosky stumbled upon a small theater. It was playing Nunsense (of all things). Soon, organizers invited them to bring their fellow artists down to Mexico to perform.

Stephan Stubbins, Artist and now one of the executive co-directors, joined the adventure. Inspired by their Baja travels, the trio set out across the United States to find a home for their own musical theater.

But the story doesn’t end there.

In 2011, a budget deficit forced California to close 70 parks. Jack London State Historic park was on the list. Amy Miller recalls in her interview with Stark Insider (see above video), “I always remember that many great theater companies are formed in State Parks.” She picked up the phone. Next thing she knew she found herself in sprawling Sonoma hills, among gorgeous, majestic ruins, situated right next to the home of the great American novelist Jack London. A deal was struck. The park was saved, and Amy and team had a dazzling piece of history available to them. Talk about an extraordinary venue!

Fast forward to today, and Broadway Under the Stars is now enjoying its fifth season. Over eight hundred people from all over the country flood into the park for each show during the summer to experience not only high calibre productions, but also the scenery, the food, the wine. And… the camaraderie. All told, some 60,000 people have experienced a show here.

Another unique part of their story, as Loni and I discovered when we attended a performance last weekend, is that performers from all over the country travel to Sonoma to join the cast. You might have a renowned Broadway star for one show, or maybe theater veterans from Seattle, or Los Angeles, or Chicago. Or maybe there’s up-and-comers, looking to learn the ropes, and catch a break. It’s that unique mix that surely helps create a very family-centric and supportive culture.

In this era of decreasing arts funding, it’s a refreshing, feel good story to be sure.

Not only do we all benefit from these extraordinary artist’s talents, but thanks to the saving of Jack London Historic Park, we can celebrate a double win. 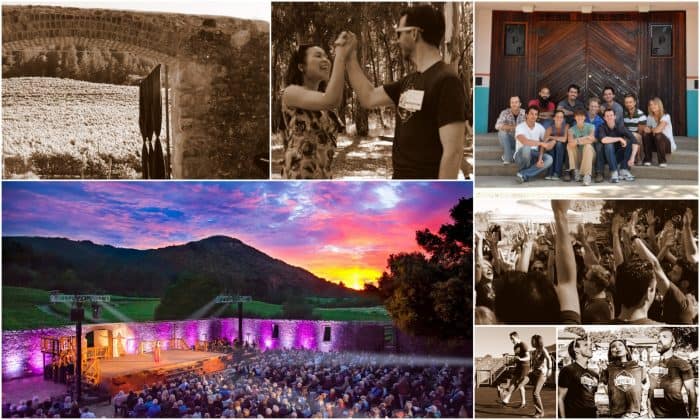 Several shows are playing through the summer. If you haven’t been, Google Glen Ellen and start making some wine country plans. The best way to experience Broadway Under the Stars is to go early. In the picnic area you’ll find music, food trucks, and, yes of course, world-class Sonoma wine. It makes for a pinch-me outing.

Call of the Wild

I could go on, but best to let Stephan Stubbins and Amy Miller share their story in this special Stark Insider video. Plus, watch the ever willing, tap dancing Loni Stark experience a day at Jack London SHP, before enjoying a stunning performance of “This Magic Moment” at the ruins, surrounded by the most fantastical Sonoma landscape you could imagine. No doubt: one of our most inspiring shoots of the past ten years for Stark Insider.

WATCH: Broadway Under the Stars – From Baja Beaches to Sonoma Ruins