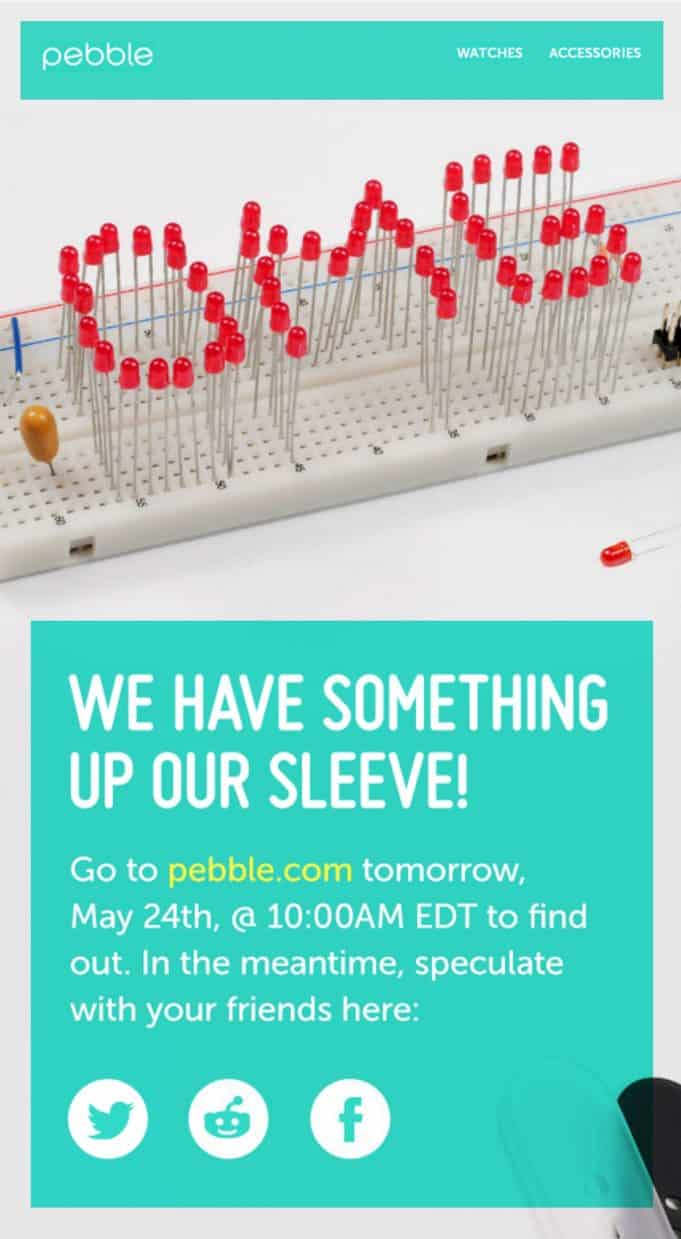 Smart bands of some sort?

A sport edition of one of their existing smartwatches?

Some kind of new screen technology?

Whatever tomorrow’s announcement brings (May 24, 7:00am PT), us Pebblers will be enthusiastically hitting refresh to find out the news asap.

“Are you ready for tomorrow?”

Out of all the guesses coming across social media, and, in particular, the Pebble sub-Reddit, my bet is on a new Pebble focused squarely on fitness tracking. That would mean: a larger screen, durable body and band construction, heart rate sensor, GPS, various tracking capabilities, long battery, and a sub-$200 price tag. It likely wouldn’t take much to build such a device given that Pebble already has much of the hardware capability and software functionality in place.

Also, it would make sense that Pebble would double down on fitness. Google’s Android Wear, with its 2.0 release coming this fall appears to be headed in that direction. Motorola, too, appears to want a piece of the action that the likes of Fitbit and Garmin dominate. It recently released a sport edition of its iconic Moto 360 smartwatch, Moto 360 sport, which not only features improved fitness tracking, but also an “AnyLight” display that is as readable outdoors as it is inside.

“We have something up our sleeve”

One hiccup in my fitness guess:

The graphic in the promo email (see lead image above) that arrived in my inbox this morning.

Featuring “OMG” lit up (via an animated GIF) in what looks like some sort of DIY LED light kit… imagery that seems far from supporting the idea of “fitness” in any capacity whatsoever.

Then again, maybe Pebble is getting Lynch-ian on us smartwatch fans.

Another clue can perhaps be found in the lower right, where the shadows of a watch band are seen. So, one plus one. Maybe the combination of DIY breadboard motif + watchbands = the long anticipated Pebble smartwatch bands, made possible by the new API?

Who knows. Either way, tomorrow we’ll have some news in the smartwatch world — a place, this year at least, which has been slow moving with scant announcements far and between.