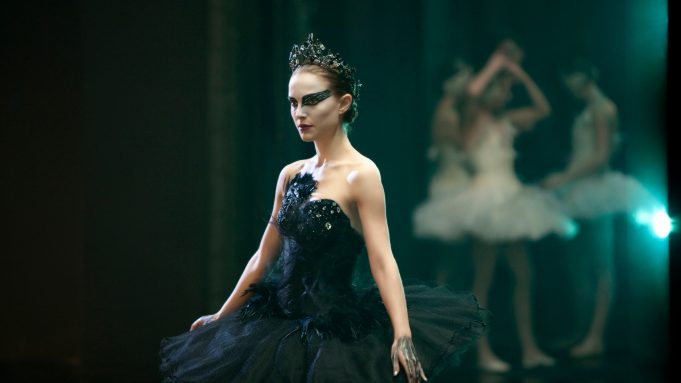 If you’re like me, movies — films — are best when they don’t conform. Explosion-free fare that breaks filmmaking rules and, almost always, taboos is the name of the game. Nothing wrong, of course, with Marvel, Iron Man 3, or Star Wars (far from it), but isn’t there something extra special about taking a cinematic acid trip into a world that seems to defy explanation, or into the mind of someone unstable (the ever wonderfully unreliable narrator), or, into something that is out-right deliriously freaky (Alejandro Jodorowsky?). When an indie film comes along, that makes me both scratch my head, and then watch it immediately a second time, I know I’ve found something possibly worthy of the Arthouse Hall of Fame.

And if you’re like me, your escape to the arthouse often must await. Like when my wife travels. Only then can I enjoy a momentary reprieve from Taylor Swift updates and her (gorgeous) videos, and repeat viewings of the glory known as The Tourist, and arm the home theater to my dark heart’s content: Polanski, Bergman, Aronofsky, and more recently, the crazy Dane himself Nicholas Winding Refn. Of course, I appreciate when said spouse returns, if not only to watch this “amazing movie” I just watched, but also to explain it to me.

Recently, after watching Black Swan for the umpteenth time, I checked out IMDB, and realized that wicked psychological torrent is coming up on its 6th birthday. Six years since Darren Aronosfky did the impossible, combining his stunning art with commercial success.

But what other films, released in the last 10 years, belong in the Arthouse Hall of Fame?

Surprisingly there’s many strong candidates. Fortunately, while Hollywood is stuck in a comic book and sequel-driven rut, we can thank the indies for giving us the real juicy, though-provoking and dangerous stuff.

So here it is, a decade of the best of the what just happened?, huh?!, who’s that and why are they doing that?, huh?!, and I need to Google that…

Capitalism and religion collide in Paul Thomas Anderson’s turn-of-the-century drama that, in some ways, might be the spiritual successor to Wall Street. Land. Drilling. Oil. Greed is good. Or is it? Daniel Day-Lewis, as he’s wont to do, completely morphs into the role of relentless entrepreneur Daniel “I drink your milkshake!” Plainview, while Paul Dano runs the local perish and incessantly finds himself on the receiving end of physical lessons in economics — and possibly acting too. Anderson frames this film magnificently. Every single scene is composition perfection, with action unfolding to the unsettling, brooding score by Johnny Greenwood.

Writer-director Nicolas Winding Refn’s commercial breakthrough is a breathless, violent ode to L.A. that ticks off all the right boxes. Pulsating 80’s inspired synth score. Check. Introverted, brooding lead on the verge of wicked revenge. Check. Stunning cinematography. Check. And dialog? Not so much. And that’s exactly how Refn wanted it, as he’s noted in several interviews. Silence can speak volumes, especially when two quirky misfits are falling love (Ryan Gosling and Carey Mulligan). The shadow fight at the end is beautiful and unexpected. “The Jacket” is iconic. The atmosphere exciting. And was that Al Brooks — the Al Brooks of Lost in America — that just slit that guy’s wrist? Drive was the film that got me into Refn. I sought out Only God Forgives. Hated it. Then, after multiple viewings, loved it. Some of his best work I’m sure is yet to come, but much of it, like Pusher (1996), Bronson (2008), Valhalla Rising (2009),  is already familiar with indie aficionados in Denmark. Bring on Neon Demon!

This horror gem came out of nowhere. First time director Ana Lily Amirpour’s magic here is her ability to create an entirely new world, filled with people and objects that seem out of place and time. It’s called “Bad City”. For some inexplicable reason bodies are tossed into a nearby gorge. Presumably set in Iran, as the promo material reminds us, a mysterious vampire roams empty streets. Derricks pump ominously, as if to suggest this is not your grandparent’s Giant (1956). Our hero Arash (Arash Marandi) drives a classic T-bird, chain smokes, and looks after his ailing, drug-addicted father. Shot in black and white, and spoken in Farsi (with English sub-titles), this is an arthouse classic that might have looked like a film school project if it weren’t so mesmerizing, and compelling. Love stories between eternal beings aren’t entirely unique, but Amirpour’s take on the subject in A Girl Walks Home Alone at Night (review) is most definitely.

I wonder if Nightcrawler would make a list like this if it weren’t for actor Jake Gyllenhaal. He’s an intriguing study in his own right. Apparently he lost a significant amount of weight to take on the role of emancipated, aspiring video news-shooter Louis Bloom. However, the script gives him plenty to chew on, including a steady stream of catchy quips and memorable quotes about how to succeed in business. The lone wolf soon finds himself on the location of car crashes and various crime scenes, shuttling fresh bloody footage back to whichever news agency is offering the highest bounty (“If it bleeds it leads!”). Truth in news and bending storylines to network advantage (fear) to gain ratings is a strong theme here, and that resonates particularly well given that all of us, thanks to the cameras and the phones in our pockets and purses, have the opportunity to be citizen journalists at the flick of a switch.

Birdman won the best picture Oscar in 2015. Critics universally loved it. But the landmark film starring Michael Keaton didn’t necessarily win over audiences, who perhaps were expecting a Hollywood version of a guy who was a former Superhero actor-turned theater actor. Instead there’s a play within a film; odd levitation and, indeed, apparent super powers at work. Extended scenes with lengthy dialog, and multiple scenes involving readings of an obscure play no doubt add further depth to the moat of mainstream acceptance and the feeling of insider baseball at work. In the hands of the esteemed Alejandro Iñárritu (The Revenant), though, Birdman feels like proverbial poetry in motion, or, maybe, some sort of watered down Broadway version of a rap song — it seems as if there’s a rhythm or groove underlying the presentation. Sure enough, on more than one occasion the musicians performing the very score itself find themselves on the set of the film, adding yet another meta twist upon meta twist. Multiple viewings recommended. It gets better each time.

Gasper Noe. Is there a more experimental filmmaker working today? I’d try to explain Enter the Void, but it’s best you experience it for yourself. It’s trippy (literally), at times bizarre, and definitely experimental. “Innovative” would be another choice word to describe this account of a dead drug dealer looking after his sister from beyond the grave. If you’re a fan of acrobatic and seemingly impossible camerawork, this film should be high on your list of must-sees. I’m not sure I’m in a rush to re-watch this one, but to experience Gasper Noe is to know that film can pack emotional wallop. 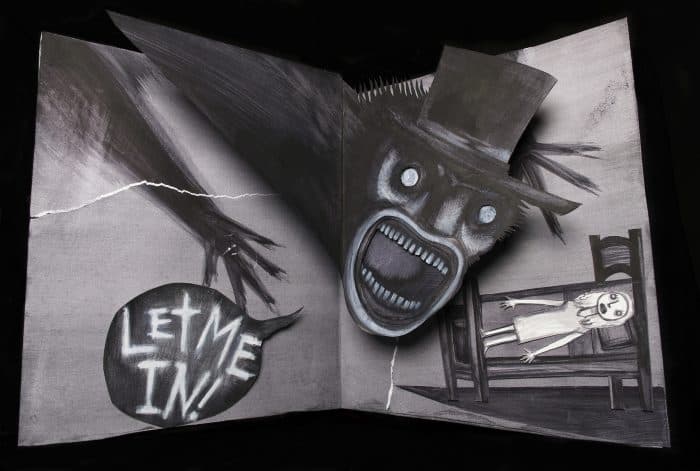 2014 was a good year for the proverbial arthouse, and Australian entry The Babadook may well be the most shiny example. Fans of psychological disorder, and internal angst should appreciate what might have fit comfortably into the repertoire of, say, Polanski of the 1960’s. At first blush, director Jennifer Kent plays the tired old haunted house hand. A single, grieving mother and her quirky son are scared when after reading a book — The Babadook — a monster comes to life, and preys on them. Things go bump in the night. Crying and hysteria ensues. Mom gets help for boy, etc. It’s trite and ever-so predictable. Or is it? Stick with it, and I bet you will want to watch this one again. That you can find multiple interpretations of Babadook is testament to the crafty script, not to mention the astoundingly manic performance by lead Essie Davis as the distraught mother. 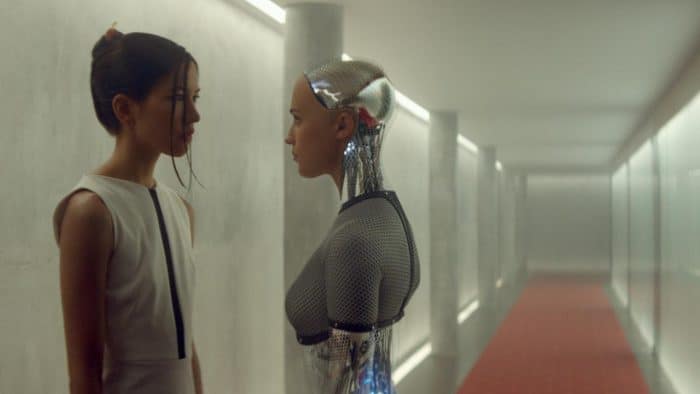 Like art, memorable films typically have a signature style. Alex Garland’s Ex Machina positively oozes style. From the stark halls of mad scientist Nathan’s layer (played superbly by Oscar Isaac) to the eerie synth-heavy score to the equally creepy robots themselves and underground laboratories, there’s an unforgettable combination of cinematography (Rob Hardy) and sound design (Geoff Barrow, Ben Salisbury) that elevates the proceedings to fine electronica art. Nathan is building the next big A.I. algorithm. He invites a programmer — who wins a contest — to his mysterious layer to test his new code, by interacting with the robots, similar to how Harrison Ford administered the Voight Kampff test in Blade Runner. Of course, the robots rise up. And the rest plays out beautifully. Some may criticize the abundance of female nudity on display and that Nathan’s experiments don’t seem to include robots that exhibit male characteristics. I suspect this is Nathan being… Nathan. He lifts weights, guzzles beer, has tons of money. I suspect he’s doing whatever tickles his fancy. 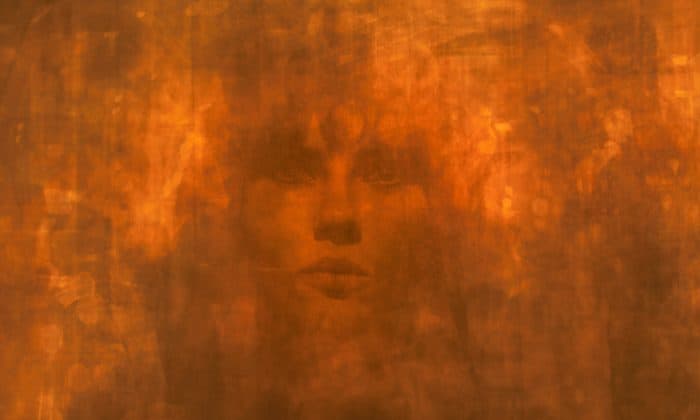 If grand cinema is like art, then it must, at times, also be polarizing. Hence: Under the Skin (review). Alien Scarlett Johansson’s journey to humanity involves a steady diet of prey in the form of happy-go-lucky passerbyers on the streets of Glasgow. Descending into a mysterious black oil in The Female’s layer they stand no chance during the intriguing seduction. Like other films on this list, the score (Mica Levi) is unique, pulsating quietly before slowly building, alternating between what might be music and what is surely some sort of experimental synthesizer, what with all its test tones and extended, pitchy, warping notes. Superb! Under the Skin doesn’t necessarily provide motive, or reason for being. It just is. Instead, it raises questions, and like Ex Machina, stirs up conversations around love, belonging, awareness of self and surrounding, reasons for being, humanity as an end goal vs. devastation of existence, etc. You either love Under the Skin or you hate it. I think Jonathan Glazer has created a masterpiece, one that will be remembered for decades to come. 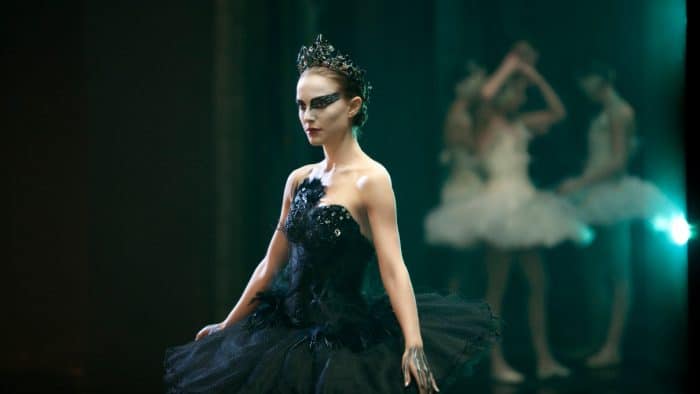 It was perfect. Yes, The Swan Queen has that right. It was perfect. And that cheeky ending was icing on the cake, a climactic finale that ended with Darren Aronosfky reminding the world who is king of the arthouse. Most of us probably remember, six years ago Black Swan was the talk of the town. Imagine, a film about ballet, with a muted color palette, and disorienting camerawork (some of it shot on Canon DSLR cameras) grossing north of $100 million… and pleasing critics? And yet, that’s exactly what happened. In some ways Black Swan is the anti-thesis to that other famous ballet arthouse film, Suspiria. In contrast to Argento’s wild, heavily saturated colors, Aronosfky’s New York is filled with dreary greys, blacks and whites. Whereas Argento turns to loud, and at times even garish, rock music (Goblin) for a score, Aronofsky, of course, has Tchaikovsky. The disintegration of Nina Sayers’ (Natalie Portman) state of mind is masterfully timed. There’s no rush to insanity here, like Kubrick and Nicholson in The Shining. Rather, we’re constantly questioning the reality of events, and are slowly seduced by the underdog ballerina herself, and, soon, find ourselves at the mercy of an unreliable narrator. Aronofsky’s finest hour. Like Pi and Requiem for a Dream, Black Swan is irrefutable evidence that there is no better director at boiling over a pot, and leaving us breathless.