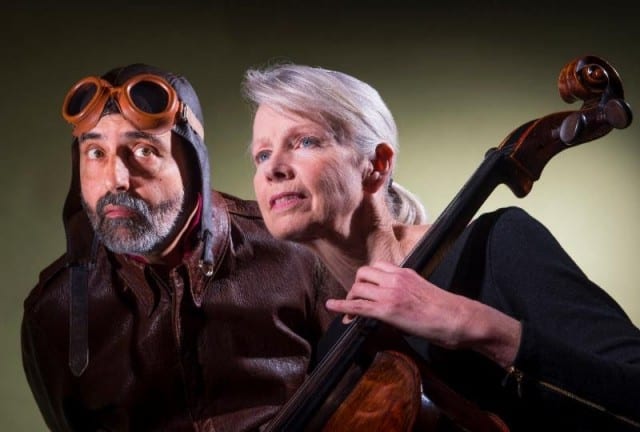 Second Time Around: A Duet for Cello and Storyteller

Second Time Around is the baby of Charlie Varon, whose Feisty Old Jew, recently graced these stages. Cellist Joan Jeanrenaud, a 20-year member of Kronos, opens this 70 minute duet with run of a rapidly changing techniques, from a flowing monotone to a sharply punctuated pizzicato, to a muted one, offering up a hint of ostinado before launching into something jarringly different. The music hovers in the air of the Marsh, a small venue with low ceilings,  providing the perfect entry for Charlie Varon, as Ben Rosenau, formerly an Army Airforce bomber pilot in WWII, now ensconced in an assisted living facility.

Rosenau’s restrained suspicions flicker with flashes of aggression before morphing into embarrassing flights of misplaced hope, emotions shifting as unexpectedly as the transitions in Jeanrenaud’s opening. Varon knows just how much of this guy, whose every response is out of proportion, his audience can take before he effortlessly shifts to the voice of the narrator or other character.

Rosenau’s probably never easy on the nerves, and he certainly isn’t here, in this interview with the teenage nephew of a fellow resident. Still, Varon treats him with phenomenal patience and compassion.

This work, dedicated to World War II bomber pilot Mort Max, draws from similar material as Feisty Old Jew. However, Second Time Around feels entirely different, both with respect to the energy of the main character, and the partnership with composer and performer Jeanrenaud.  Jeanrenaud’s cello dances around the emotional tones, fleshing out color and nuance that Rosenau never fully articulates. If you’ve spent some quanta of your life perpetually in the shadow of WWII, but not hearing family stories, or hearing it as only as places on maps, Second Time Around touches home.

I confess, I have no objectivity when it comes to Varon’s work, if only because he insistently brings back half the cast of my childhood. Rosenau could have easily been my father, a man who, it was said,  “was different after the war.” My review of  Feisty Old Jew reported that “Varon calls these pieces – and their related short stories ­­– his love letter to his parents, and to that generation of Jews. Varon performs with such heart that his love letter becomes yours as well.”  That’s the magic of Charlie Varon performances – and especially of Second Time Around.

Varon and Jeanrenaud will be at the San Francisco Marsh through April 17.