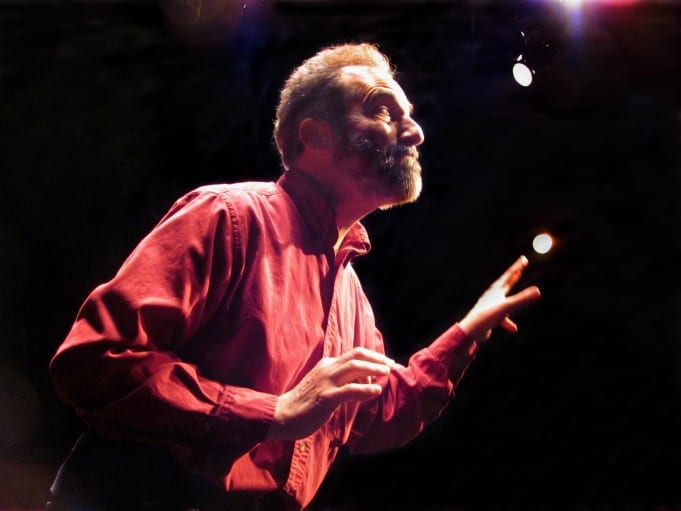 Charlie Varon not only makes the improbable real, he makes you think you know the highly improbable characters of his one man show personally.

Okay – I don’t really know any 83 year old like Bernie Schein, who got so peeved waiting for a cab that he started hitching, only to get picked up by California surfer dudes – which began his calculus of one upsmanship against the innocent sots who gave him a lift. But I do know his 91 year-old ex-wife in Brooklyn, who still reads Spinoza. Trust me, Bernie could never time a remark so perfectly that she’d spew orange juice and pills out her mouth. She was too smart for Bernie.

Jewish geography aside, that’s the level you get involved with Varon’s characters. They’re so real because they’re drawn from folks he met when doing shows at a Jewish old age home. Varon calls these pieces – and their related short stories ­­– his love letter to his parents, and to that generation of Jews. Varon performs with such heart that his love letter becomes yours as well.

If Varon’s stories ended in the old age home, with Bernie kvetching and sparring with Al Mink, that would be interesting. However, Varon’s monologue presents a weird mix between that first post-shtetl generation (with all attendant anxiety and tsurris)  and what Varon sees every day. He remarks “It’s about a city in flux. It’s about what I see when I step out of our theater and walk down Valencia Street – the hipsters, the techies, the restaurants serving truffle butter and pink aioli. When I moved to the Mission District in 1978, my rent was $70 a month. Now people pay $70 a month just for lattes.”

The contrast Varon presents is particularly interesting if you’re a certain age and Jewish – and maybe if you’re not – because you bridge those worlds. Varon’s gift is that he wraps it up in a bow and delivers it to you. That he puts a San Francisco patina on the old country (aka NYC) is one more balm for us displaced right coasters.

All of the above would be so much editorializing, but Varon is also a killer entertainer. He brings a manic energy just about to lose its bounds, which is a lot more interesting than watching the energy go only to deflate.

Varon was joined on Sunday by David Jacobson, who performed a snippet of a larger piece about Uncle Jack. If Varon’s world is the shtetl meets the Mission, Jacobson’s world is even more out there as Uncle Jack, who in alternates takes seems like a creation of Hunter Thompson on a bad day, or perhaps the best of MAD. Uncle Jack giving Helen Keller an M-1 carbine. Uncle Jack giving Helen Keller a Smith and Wessen. Dung beetles as metaphor – and most of all, your brain on coupons. His material and his delivery are so spot on that I’ve got to see more of him.

Charlie Varon will be at the Berkeley Marsh through March 22, 2015.   This is one you want to catch.