The How and The Why

3 out of 5 stars - 'Worth a Look'
Aurora Theatre
Berkeley, California
By Sarah Treem
Directed by Joy Carlin
Review by Cy Ashley Webb

How and why, how and why. Artistic director Tom Ross reminds us that researcher Ernst Mayr asserted that these questions underlie every meaningful inquiry in evolutionary biology. These are the questions that underlie Sarah Treem’s play, which just opened at the Aurora.

I didn’t anticipate that this show would take up residence in my head this weekend, as I turned it over, and over, trying to articulate what worked and what didn’t. Even as I questioned why the playwright tried to do so much, why she revealed what she did, and why so much, arguably the most critical bits – remained untold, I found myself oddly moved, and drawn to the characters, one of whom reminds me of a biologist friend.

Getting my own biases out of the way first, this is the sort of script with which I tend to have problems. Too many plays about female scientists leave the audience with an after-the-fact gloss, celebrating the scientist without any real idea as to why. This cheapens our discourse by telling a story that has little to do with the character’s real motivation.

The How and The Why avoids this trap. Science doesn’t take a back seat, if only because the characters’ research explores possible evolutionary value of menstruation – an idea that was puzzled over back when I was in college in the late ‘70’s. As one of the characters points out, we know the how – the physiology and the endocrinology – but remain clueless regarding the why – the evolutionary advantage served by menstruation.

Joy Carlin avoids the two dimensionality of most woman-as-scientist plays by folding the “why” into a larger drama between two scientists. Zelda, capably played by Nancy Carlin, is the older of the two. Well-recognized in her field, she’s loosely modeled after anthropologist Kristen Hawkes, whose “grandmother hypothesis” proposes an evolutionary purpose to the infertile second half of a female life. Grad student Rachel, played by Martha Brigham, is such a study in insecurity you want to take her offstage, and give her a Xanax. Her character is loosely modeled after McArthur winner Margie Profet, whose novel ideas about the why of menstruation were completely rebutted by Beverly Straussmann. 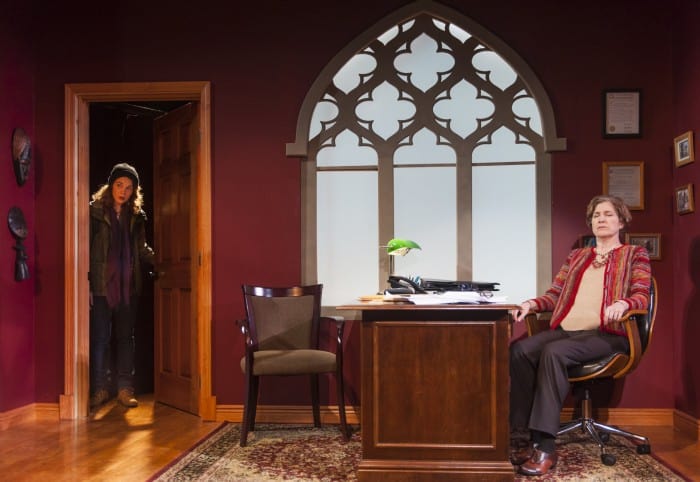 Treem tries to do so much in the script, it makes my head ache. Biological connections  – not all of which are explored in lab – get teased out over the course of this two act play. It’s precisely this teasing that prevents this from being an evolutionary biology version of Silent Sky, TheatreWorks’ production about Harvard astronomy Henrietta Leavitt. I came away with the feeling that playwright and director cared deeply about these characters.

However, I’m still left with a sense of incompleteness. Why did Treem choose Margie Profet and why did she chose to develop her this way? Why did Treem ignore her subsequent disappearance, and why did Treem feel the need to develop other story lines about her character? Treen’s sympathetic picture of a young woman, who badly bombed a conference presentation, is so wrapped up in the femaleness of it, that the key question as noted by Tom Ross – how the hell do I become a grownup? – gets lost. There is so much story here, and so much seems unresolved.

Echo Brown recently suggested that we go to theatre because we want to be moved. My questions about this production aside, one thing is clear. “The How and The Why” delivers on this proposition handsomely. I’ll be turning this one over in my head and revisiting Profet for some time.