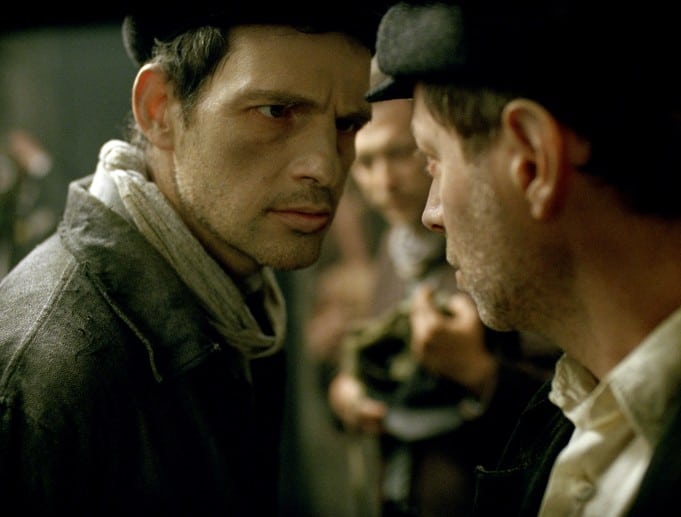 5 out of 5 stars - 'Outstanding - Starkie!'
Directed by Lázló Nemes
Review by Clinton Stark

Google this Hungarian film, and attend a screening where and whenever you can.

Dubbed a holocaust film this is as raw and unnerving an experience as you can get. At least that was my experience at a special screening of the film during the Mill Valley Film Festival.

After a relentless 100 minutes, when the house lights slowly went up, absolute silence hung in the air. The entire place was in shock. Or, maybe that was relief — we were finally free from the ordeal. Finally, applause gathered momentum, before becoming rigorous. This is not an enjoyable film to watch. But it’s spectacularly well made, and as heart-wrenching a depiction of Auschwitz as you’re likely to see.

Son of Saul won the Grand Prix at Cannes, and according to MVFF executive director Mark Fishkin, was the talk of the festival. No wonder!

Per filmmaker Lázló Nemes’ request, it was screened at the Rafael using gorgeous, rich, organic 35mm print. Interestingly, after opening promos, the screen and drapes re-sized to what looked to be a 4:3 aspect ratio. Odd, I thought. Later I suspected this was an artistic choice. It gives the viewer little relief, and contributes to the sense of claustrophobia and confusion the protagonist Saul (Géza Röhrig) faces as he navigates a maze of death.

There’s a tiny glimmer of hope for humanity in Son of Saul — your heart will thank you if you look for it, latch on to it, and never let go.

Another creative choice: to shoot almost the entire film over Röhrig’s shoulder in the third person using extremely low focal range and shallow depth of field. The focus puller on this film must be some kind of wunderkind. Again, this decision places us right into the middle of the despair with little opportunity for oxygen. Those familiar with video games will know how this camera angle can be unrelenting in its ability to create a sort of claustrophobic chaos.

With what’s happening in Syria and, sadly, so many other parts of the world, even in 2015, Son of Saul is not necessarily just about our past, but it’s perhaps also a reminder that history tends to repeat itself. Resolute evil manifests itself in genocide. And that utter, inexplicable sickness, on a smaller scale, still exists today. There’s a tiny glimmer of hope for humanity in Son of Saul — your heart will thank you if you look for it, latch on to it, and never let go.