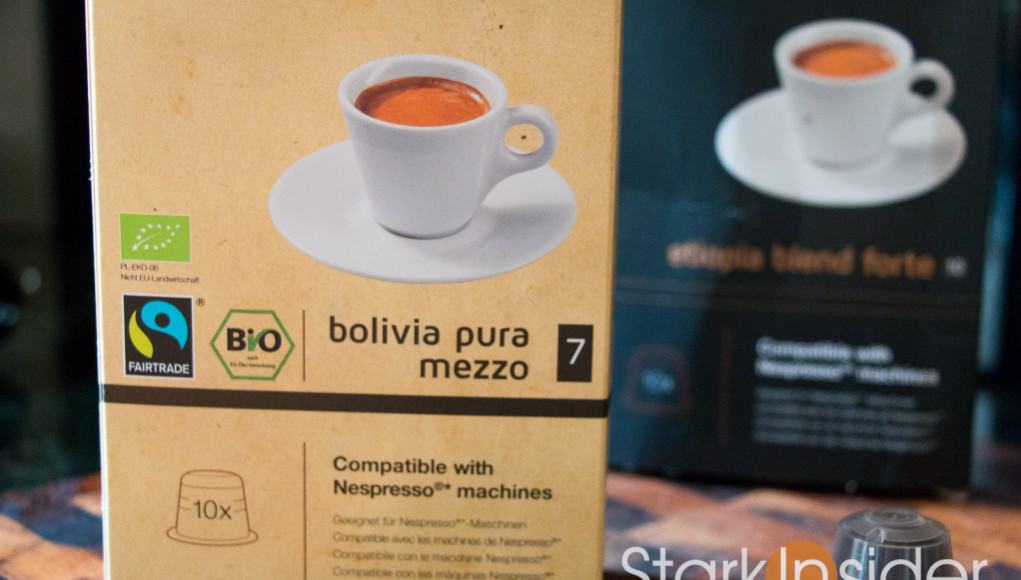 4 out of 5 stars - 'Smashing'
PROS
+
Only $.50 per pod. Lots of styles available. Well packaged and fresh. Fairtrade option (Bolivia Pura Mezzo). Good flavor.
CONS
–
Gourmesso "10" not as strong as a Nespresso "10". All pods look identical (no color identification).
VERDICT:
"Smashing"
Some real winners here. And at 33% less, Gourmesso gives us espresso fans budget relief without much sacrifice. Recommended.
Review by Clinton Stark

Today we’re looking at Gourmesso — Nespresso compatible coffee capsules that come in at about half the cost.

Gourmesso pods cost about $.50 each.

That’s about 33% in savings. If you’re like me and enjoy a few espresso-based drinks each morning, that can add up significantly over the years. Competition when it comes to sourcing pods your Nespresso machine is always a good thing. Not only are we seeing lower prices now, but also an increase in bean and flavor types. Variety, as they say, is the spice of life.

But more importantly: how do these Gourmesso coffee pods taste?

Not too bad it turns out. Quite good in fact.

There are some caveats though. And, a lot of this will relate to personal preference when it comes to things like strength of espresso, and variables such as bitterness and milk to coffee ratios.

I tested through a wide selection of Gourmesso pods including the following flavors:

Each box contains 10 pods. Unlike Nespresso pods, they are further packaged into pairs.

Once you open the outer foil, you’ll see a pod that’s slightly different than the ones you’re accustomed to seeing from Nespresso.

For one, there’s no markings or colors to distinguish the pods. Once open they all look the same. So be careful to only open the outer foil when you’re prepared to pull a shot. Either that, or you’ll need to be more organized when it comes to storage. With Nespresso you can throw pods into a zip lock bag, for instance, and always be able to pull out a strong one (black) or decaf (red) in a moment’s notice.

Unlike Nespresso, these pods are semi-transparent, so you can see the coffee grounds in the pods.

I was impressed with the aroma. There’s a wonderful release of that ever-so-welcoming coffee bean bouquet when you tear open a pair of Gourmesso pods. If you’re an espresso fan like me, you know the feeling. Good morning!

Each style has a rating, employing an identical scale to Nespresso: 10 being strongest, 1 the weakest.

Putting them into the machine work exactly as you’d expect, though I did find slightly more resistance when locking the lever into place — not enough for any sort of concern.

Overall I found the Gourmesso pods less powerful than the ones from Nespresso.

For instance, I like strong espresso. So I immediately gravitate towards pods rated “10”. In Nespresso speak that would be the Ristretto and for Gourmesso that would be the Etiopia Blend Forte (a Ristretto is also available, but I did not have one on hand to compare).

This would be a good comparison: a Nespresso 10 pod vs. a Gourmesso 10 pod.

What I found is that both taste very good. But the Gourmesso was slightly less strong, and if you pulled the shot too long it may even become slightly watery. If you like to make milk-based drinks like a latte or cappuccino it may require you to use less milk, lest the thing become too weak in flavor. Again, personal preference. Those who prefer less bitterness and a smoother morning coffee drink might appreciate this style more.

I’m generally not a fan of flavored coffees. Though I do like topping my latte with some vanilla or cinnamon, I enjoy the pure experience of a strong, unadulterated bean. So it was a small surprise to discover that one of my Gourmesso favorites was the only flavored one of the batch: Soffio Caramello. It yields a wonderful, subtle caramel expression to a latte. I found it was a nice change-up to my regular espresso routine — one, that admittedly, could get quite staid and predictable.

I also tested Gourmesso (and Nespresso) pods directly with shots pulled from my Pasquini Livia espresso machine. On days when I’m not in a rush, I almost always pull shots from the Pasquini. It produces bold, rich shots with incredible crema. Comparatively, the crema on the pods were about 25-50% less on average. And if you put the shots side-by-side — identical pull times and volume — you can see that the Gourmesso shot is less translucent. Ultimately it’s less intense. But not my much mind you!

And the overall flavor is pretty darn good. Benchmarking them against a machine that costs thousands more is not quite an apples-to-apples comparison. Though I did come away impressed at how close the Gourmesso pods can come to a full-on barista style shot.

After a few weeks of testing I came away impressed enough to recommend Gourmesso pods.

Again, if you like the absolutely strongest espresso experience, and don’t mind paying for it, the Nespresso Ristretto (10) is hard to beat. My solution was to use less milk when pulling shots with the Etiopia Blend Forte (Gourmesso also offers a Ristretto 10 pod that I didn’t test). Or, often I would drink it straight up. Bellissimo!

Saving 33% though is not insignificant. And there’s enough variety and flavor styles to expand your morning routine.

Of the 6 styles Gourmesso sent, I would rank as follows:

No doubt I will be experimenting with other Gourmesso pods over the coming weeks. Several of these, like the Soffio will make it into my regular espresso cycle. 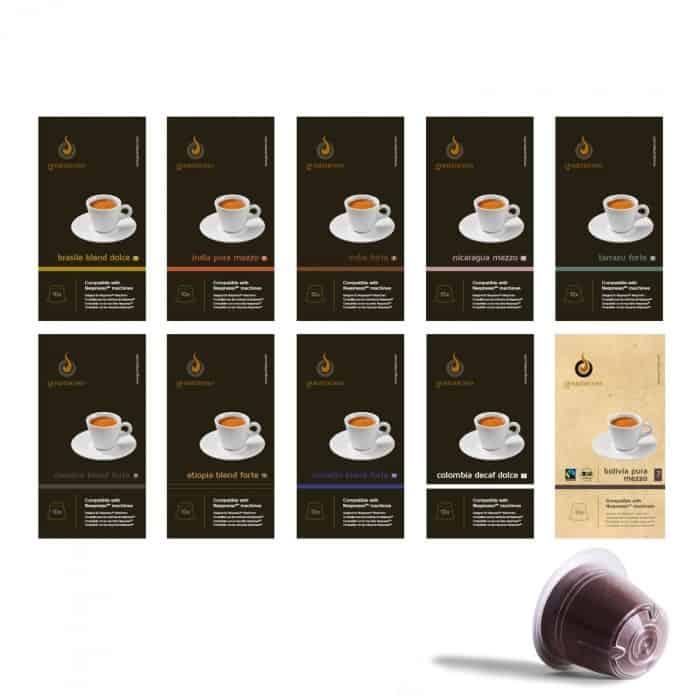 Fortunately, Amazon carries Gourmesso. And there’s a lot of choice.

If you’re just starting out, and want to give them a taste test, you’ll probably want to start with one of their variety bundles:

or if you’re into flavored drinks:

There’s plenty more on offer, with many of the Gourmesso packages sold direct via Amazon Prime, so you can enjoy fast, free shipping. You can browse the selection here.

So there you have it. If you’re a Nespresso aficionado these Gourmesso pods are probably worth at least a taste test.

I did wish they had one that “went to 11.” That aside, there’s enough interesting flavors and offerings to add some diversity to your morning (and evening?!) ritual. A lifetime of peppiness, now 33% off! Isn’t life grand?!