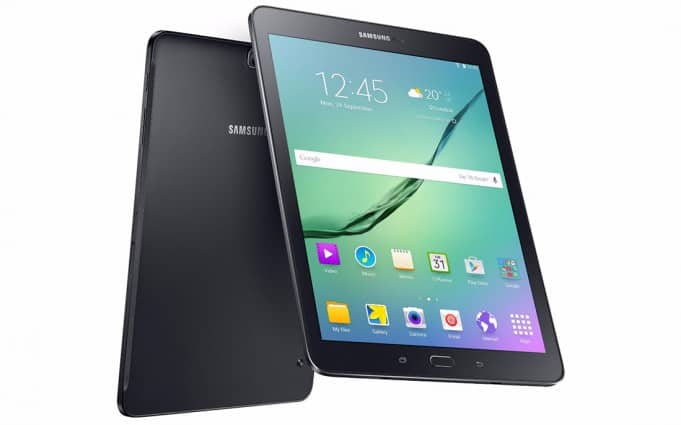 The wheels keep on turning at Samsung. At least on the product front. With competition mounting from the Chinese (notably Xiaomi, and Huawei), the South Korean tech giant is helping that a hyper-fast product cycle will keep its fortunes headed in the right direction. So while financials might not be so rosy these days (Q4 tablet shipments were down 18%), that’s not slowing its product engine in the least. This part of the company apparently goes to 11.

Dubbed the S2, the uber-slim Android tablet will come in 8- and 9.7-inch models. 32GB and 64GB options will be on offer. As will an LTE variant. Many will appreciate the inclusion of a microSD memory slot — something that we’re unfortunately seeing less of on Android smartphones. Rounding out the specs: AMOLED display (2,048 x 1,53), Octacore CPU, 8MP/2.1MP cameras, 3GB RAM, fingerprint scanner, and beefy 5,870 mAh battery. The S2s will run Android 5.0 Lollipop (I’m expecting they will get the latest version, 5.1.1.).

Samsung Mobile Division CEO JK Shin said the S2 is Samsung’s “thinnest and lightest tablet of its size ever.” Your move, Apple.

No pricing has been announced, but we’re told they will shop next month (August).

I think price will be key.

As we know all too well, the tablet market has slowed dramatically. That’s one of the reasons why I’m convinced companies are turning their attention to additive and complementary product lines, the most obvious example being the smartwatch. We already have smartphones. We already have tablets. So, now, goes the thinking, we may soon also all have smartwatches (maybe, it’s all about attach rate and treating the opportunity as an accessory sale).

Why on earth, prey-tell, does Samsung insist on putting the back button on the RIGHT side?

Going back is intuitively the left. Left = back. Right = forward. This drives me nuts. I’m Canadian. I’m not supposed to get annoyed by little, first world things, or pretty much anything for that matter. But, this… this is making me angry. Ver angry indeed!

Part of the problem with tablets (and smartwatches) is that successive generations of product are not making the kinds of quantum leaps in capability we saw, say, in 2009. Most tablets from 2014, or even from the last few years at least, run Android just fine, and have displays that are more than capable. So, why upgrade? A fingerprint sensor is nice, as is lightness, but am I going to drop $500 or so on a shiny new thing, when my old iPad Mini and LG G Pad are “good enough”? Probably not.

However, if Samsung can turn the tables and play the price card, it could one-up the Chinese. Price the S2 aggressively, and all of a sudden consumers who would otherwise stick with a 2013 Galaxy Tab 3 may be inclined to take the bait, and upgrade.