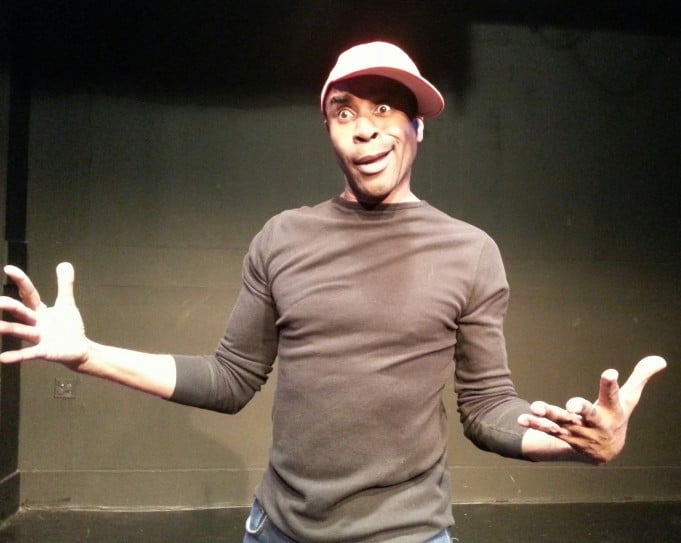 STEREOTYPO: Rants and Rumblings at the DMV

STEREOTYPO: Rants and Rumblings at the DMV really begins when you’re hanging outside The Marsh, surrounding by others returning to see Don Reed. That’s the thing, really – Don Reed is soooo good that if you caught Can You Dig It? or his other shows, you’ll be back for more. “Rants and Rumblings” is no different.

The SF Marsh set isn’t exactly like ones from Reed’s Leno appearances or his dozens of other television credits. Barely a stage with four folding chairs, a musical stand with lyre tilted backwards, and a box in the corner, but we’ve seen Don Reed do much more with less. This is the DMV, that great leveler, and we’re going to be here all day.

“cha-ching, cha-chang, cha-chung. No, not like some Asian thing. That’s like way past bling. on to blung…” and so begins the floor-pacing nervous DMV energy that powers Don Reed’s new one-man show at the Marsh, just extended to May 9th. With a run time of 1 hour and 20 minutes, this will be the shortest time you ever spent in the DMV – and the funniest. This trip into the absurd brings you right back to real life.

Reed presents nine characters – beginning with Alberta – the first roadblock at the “appointments or no appointments” desk.

Past Alberta, you get a dose of DMV outrage

Past Alberta, you get a dose of DMV outrage (“It ain’t due process if a new process is due”), heartbreak (transgender Venus found face down in the gutter), cheering (Asperger’s adult saying “bye bye asshole” to his mother’s dubious boyfriend), humor (the disabilities that put you in the head of the line at Disney also work at the DMV – the unhappiest place on earth), and the perils of businessmen off their meds.

A frayed thread of hope runs through all this, so that bullets fired into the ceiling instead of elsewhere seem like a benediction, instead of tragedy. If it’s not a big hope, an existential hope, it’s at least a hope that that you’re number might be called, a hope that you’ll have memorized enough of the damn eye chart to get over again, or at least the computers won’t crash ‘til you’re outa there.

That hope runs through all these characters, including the hope of the Pakistani taxi driver to avoid the threatened arranged marriage, or the black kid debating about what face to put on. You know these characters … and in the diasporic crapshoot that’s the DMV, you are these people. That’s the great gift of Don Reed – and of killer actors in general, and good solo performers in particular: paying attention enough to embody some truth and bring it back home for all of us.