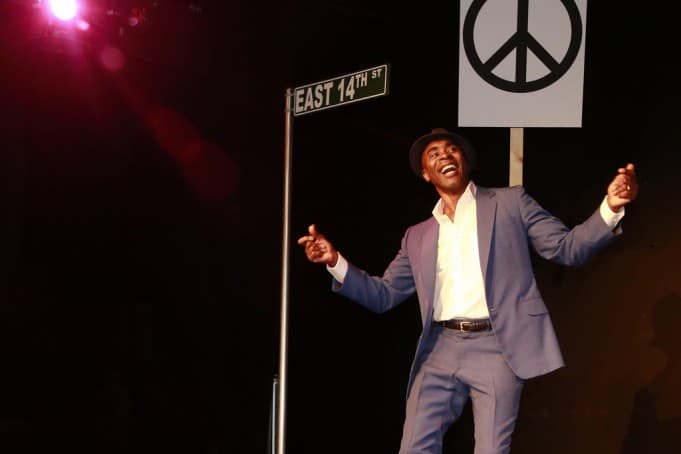 Can You Dig It?

Some things are worth breaking tradition over: Don Reed goes to the top of the Starkie list. Hang the idea that’s only July and Starkies are an end-of-the year thing. Reed’s one-man-show at the San Francisco Marsh is simply the best I’ve seen all year and then some.

Lest you find the title “Can you Dig It?” off putting, rest assured that this isn’t your usual self-congratulatory ‘60’s shtick. Reed’s not claiming any moral high ground or trying to impress with how cool he thinks he is. Rather, he’s a gem of a storyteller, spinning tales of growing up in Oakland with dance moves that best anyone on two legs. Rather than being the story, the ‘60’s and ‘70’s thing is the backdrop of the story – and that makes all the difference.

Can You Dig it? works so well because it comes with an enormous heart, humble curiosity, and the comic sense to note when someone’s taking himself too seriously.

Throughout Reed’s narrative, which runs from being a toddler to graduating UCLA, we watch him effortless morph into his pimp father, shoe-tying mother, kid sister with suspiciously Caucasian taste Jehovah’s Witness step father, teacher, gay brother Tony, bully brother Darrell, an obscenely obese stripper, and even James Coburn. Each character becomes instantly recognizable because Reed goes to the heart of what makes these characters tick.

One of the many things I marveled at was the brilliance of Reed’s script. Most life stories suffer and die under the burden of their own self-absorption. Reed’s is different, in that it celebrates everyone with whom he grew up. Can You Dig it? works so well because it comes with an enormous heart, humble curiosity, and the comic sense to note when someone’s taking himself too seriously. Reed’s at peace with these people, even his father’s dubious partner, Trout Mouth.

We see Reed’s world through the eyes of a child, which makes it all incredibly believable. Thus, we have his styling pimp father, the ultimate stay-at-home dad, making huge pancakes and organizing his tribe of offspring to clean the house. We have him getting shook down at school for his lunch money  as a “donation” to the Black Panthers.  Perhaps, most of all, we have his mother’s fingers tying his shoes. We end up caring terribly about these people which is why Reed’s exhortation to treat the rest of the world as you treat your family  (“Yeah, they bug you and do stupid things, but you just let it go”) so effective.

The only drawback to this show is that it eventually ends. Reed is the ultimate commuter, coming up from LA where he works as the warm up comic on Jay Leno, to perform at The San Francisco Marsh. We’re incredibly fortunate that he’ll be here until August 18th.