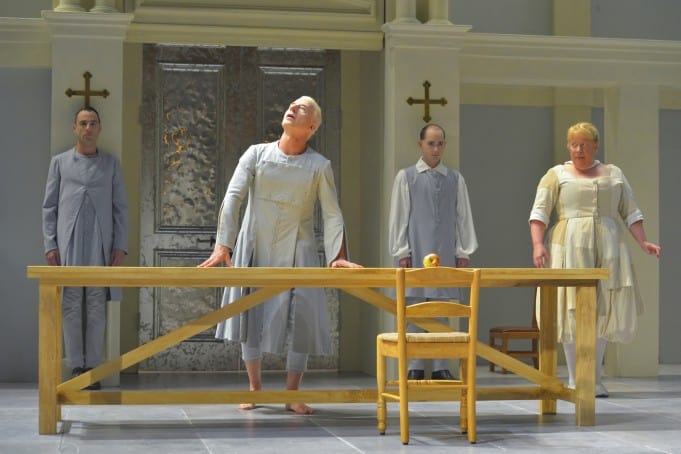 Expect to be in a time warp throughout the two hours and 45 minutes making up Tartuffe, the Molière farce that opened at the Berkeley Rep Theatre on Friday, because time will just fly by. If you haven’t had a chance to visit 17th century pre-French Revolution comedy since high school, this modern adaptation by David Ball will have you laughing so much your sides ache. You’ll be amazed that something so dark could move so lightly.

While Tartuffe served as a vehicle for Molière to get in his digs at the Church and French aristocracy, the hypocrisy on the Roda theatre is thickly familiar. If your mind turns to those contemporary holy rollers who want to rewrite textbooks to claim that Moses inspired the American Revolution, or if you’ve been petutzed over the DC clowns, so devoid of the Christian virtues they claim to profess, Tartuffe will have a salutary effect on your blood pressure.

The French are better at this sort of thing: Smart fun with no morning-after regrets makes for good entertainment. Whether it’s Congress or the Knesset that has you knocked sideways, Tartuffe provides a night’s respite.

This Berkeley Rep production has a huge operatic feel – oversized, like everything else about this adaptation. Even the sweeping classical lines of the set design seem over the top. However, the over-the-topness wasn’t not annoying, in the way that British over-the-top humor can be annoying. This was a killer cast that richly delivers.

Suzanne Warmanen gives us Dorine, servant, chief cook & bottle washer to Orgon, lord of the manor. More than anyone else, she’s the one you’ll remember from this production – if only because the strength of character she projects outweighs all the hypocrisy of all the other, which is no mean feat.

The counterweight to Warmanen’s Dorine was Luverne Seifert’s Orgon. Program notes provide a hint has to why his over-the-topness doesn’t get annoying. Seifert – as anyone whose ever seen him can attest – is a funny, funny guy. Director Dominique Serrand explains he asked Seifert not to be funny. The over-the-topness stems as much from that repressed energy, bursting to escape,  than from any particular act.

Taken together, the energies of Warmanen and Seifert and Epp drive the story forward far more than the Orgon nixing his daughter Mariane’s nuptials to Valère (respectively played by (Lenne Klingaman) and (Christopher Carley).

Steven Epp, of course, plays Tartuffe. Epp in town is always a good thing. Since there’s no particular conflict in this character, he cranks up the huge talent that brought us Maniac in Accidental Death of an Anarchist and gives us a conniving clergyman whose loathsomeness is carefully calibrated. His two campy, homoerotic slithering assistants, each with an undercurrent of violence only make your skin crawl more.

Tartuffe is a coproduction with South Coast Repertory and Shakespeare Theatre Company. It will be at the Berkeley through April 12.