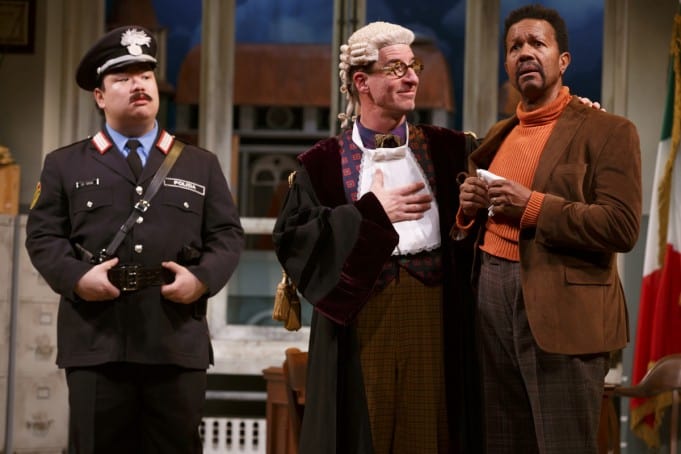 Accidental Death of an Anarchist

Berkeley Rep artistic director Tony Taccone tells a story of picking up playwright Dario Fo and his entourage at the airport. Taccone writes, “We went to a Chinese place in the Mission where the group proceeded to consume mountains of food which shouting to/at each other in Italian. People started to stare. Taking this as a personal challenge, Dario stood up and took stock of the room. To my shock and amazement, he began moving from table to table, introducing himself in Italian and them launching into a series of animal impressions. Donkeys, giraffes, dogs… by the time he got to the baboons everyone in the place was howling. He took phone numbers, told people about his show and left to a standing ovation.”

If you substitute Maniac for Dario Fo, and ditch the animal impressions, I can think of no better description of the energy in Accidental Death of an Anarchist, which just opened at the Berkeley Repertory Theatre. Steven Epp as Maniac is smart, irrepressible, and so damn funny that you really should pee before entering the theatre.

This Berkeley Rep production (co-produced by the Yale Reparatory Theatre) was adapted by Gavin Richards from a Gillian Hanna translation. While Richards is known for his 1983 adaptation, which he directed and performed in, the program is silent as to the origins of this more current adaptation, which included references the WMDs, waterboarding, the 2008 financial meltdown, the Boston bombing and other recent events. All of these – and more – are glints in the rapid-fire humor that makes you want to take this show in twice so you can catch the bits you missed because you were too busy laughing the first time. Even the sight gags are multi-layered, working from different angles.

Set design for this commedia del arte farce is note perfect. Just as Maniac becomes an impostor and uses all the other characters as unpaid actors in his farce to painlessly suggest that we’re all actors in someone’s drama, Kate Noll’s scenic design of the Italian police station remains framed in a large window of crumbling concrete and nested in the larger stage, with exposed ladders, lighting trees, musicians and assorted stage paraphernalia. Under any other circumstances, such obviousness would be like someone telling you about theatre in an eat-your-brussels-sprouts kind of way; however, in this production, it raises the humor even more, allowing Epps to briefly riff off of being the stage manager of “Our Town.”

ALSO SEE: ‘Once On This Island’ an eye opener

If you get impatient with commedia del arte because it feels too goofy and too cartoon-like, Accidental Death of an Anarchist is especially for you. You’ve seen all these characters before, but this play is so smart that you probably haven’t seen these caricatures. You’ll leave the theatre trying to draw lines between individual actors and corresponding types, and trying to get at some essence as to why these are so recognizable. For example, Bertozzo (Jesse Perez), Constable (Eugene Ma), and Pissani (Allen Gilmore) and Superintendent (Liam Craig) fit easily onto the set of a very warped Hill Street Blues.

Accidental Death of an Anarchist will exercise your brain while the rest of you is doubled over laughing. This is the stuff that’s so good you get a Nobel Prize for writing it. There is no better entertainment.