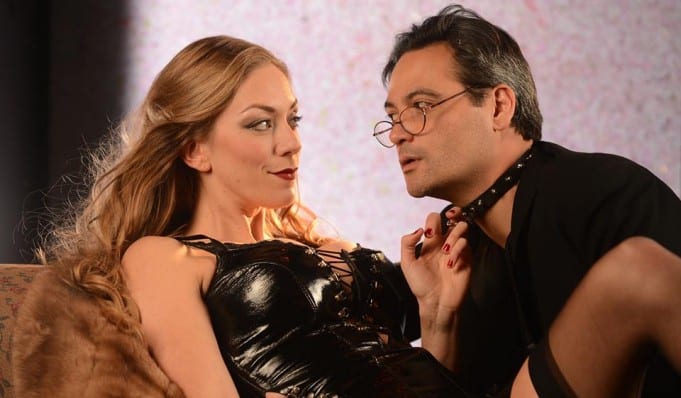 “Is it love you’re offering?”

We may never be sure. Nor may Thomas (Johnny Moreno), whose titular play Venus in Fur may well serve as one of the most sophisticated, enigmatic, and, downright interesting devices to hit the stage in recent memory. His foil, Vanda (Allison F. Rich), a struggling actress, arrives late to auditions for the lead role. Though Thomas rebuffs at first–his significant other awaits a dinner date–the two soon find themselves acting out his play, scene by scene. Storm clouds loom, thunder strikes. A pseudo-sexual journey begins, and the playwright finds himself drawn to Vanda, but is his play telling us a story about fictional characters, or revealing some sort of deep maze, carved from his own mind?

Much of the mystery in Venus in Fur revolves around the sauce pot Vanda. The proverbial wolf in sheep’s clothing–or is that temptress in 1870’s corset?–she wants the part, and she seems to know the lines… very well. So much so that she challenges the political correctness of several of the playwright’s passages, referring to them as sexist. This is where the play-within-a-play really heats up. A certain verbal tango ensues, as the story of the play (which is delightfully strange and confusing) reveals itself, and the two actors alternate between being themselves, there in an empty New York theater on a stormy night, and playing these fantastical, sexually charged characters, in the late 19th century.

The blurring between reality and acting is so expertly done here, at San Jose Stage, that we can’t help, but feel at times that we’ve been given a bit of the old rope-a-dope. More than once on opening night, I had an “Ohhh!” moment and had to mentally replay the last minute before coming to grips what was now transpiring so exquisitely before my eyes.

To pull off this intricate web of story-telling requires acting beyond the pale. Fortunately, what I saw on this particular balmy San Jose evening was, for lack of a better word, epic.

Johnny Moreno and Allison F. Rich may well have delivered two of the most historic performances to ever grace SJ Stage, or just about any theater here in the San Francisco Bay Area, at least so far as I can recall.

Moreno, who bears more than a passing resemblance to Robert Downey, Jr. aka Iron Man/Tony Stark, alternates effortlessly from vane artist, to disinterested actor, to ambiguous sexual creature. Accents can be a tricky thing–never mind that he switches among several, again without missing a beat.

Meanwhile Rich is absolutely fearless (as the role requires). She’s just as adept at dropping the f-bomb with impeccable timing, as she is coyly seducing or chastising her prey.

Both these actors (the real ones!) need to reveal themselves not only physically (there is so much skin here I thought for a second I was at Magic Theatre), but also in a manner that can only bring me to a quote from the film Sideways when Jack was explaining a wild wine country fling, “I went deep last night, Miles. Deep.”

A photo from January 14 on the San Jose Stage Facebook page shows both Moreno and Rich at their “first rehearsal.” To go from learning the parts for this play to opening night in just over three weeks is testament to their skill, and, surely their work ethic. After the play I did some Googling, learned more about the novel and play, and also added the Roman Polanski directed Venus in Fur, also based on the 1870 novel “Venus in Furs,” to my Netflix queue. I’ve yet to have time to watch that well received film. However, the ending in the play certainly had me recalling some of that trademark Polanski, film school-esque visual and metaphorical cacophony. If you’ve seen Ninth Gate or The Tenant you’ll understand the vibe that pervades the finale here. It’s memorable.

In taking on this new play (it first opened off-Broadway at Classic Stage Company in 2010) so successfully, San Jose Stage has served notice: it plays in the big leagues. This is the kind of work I’d expect to see at LORTs such as the A.C.T. in San Francisco or Berkeley Rep. Yet, the San Jose Stage surprises. This is a smart, unusual, supremely well-crafted production. Don’t let the marketing fool you, this is not a bawdy S&M romp or Fifty Shades of Grey knock-off. Far from it. In fact there’s a sly nod within the play about marketing a play, and perhaps we were punk’d a bit on that too when it came to the oft-used cleavage-centric imagery seen across downtown San Jose and in emails to promote the show.

“A women’s power is only through men.”

Simply Venus in Fur is must-see theater. Through and through–acting, set design, lighting, and sound–this is a production that deserves a wide audience (though I fear the material may be a tough sale with the masses). I vividly recall seeing Pillowman here at San Jose Stage years ago. That play stuck with me. I have a feeling Venus in Fur will too.