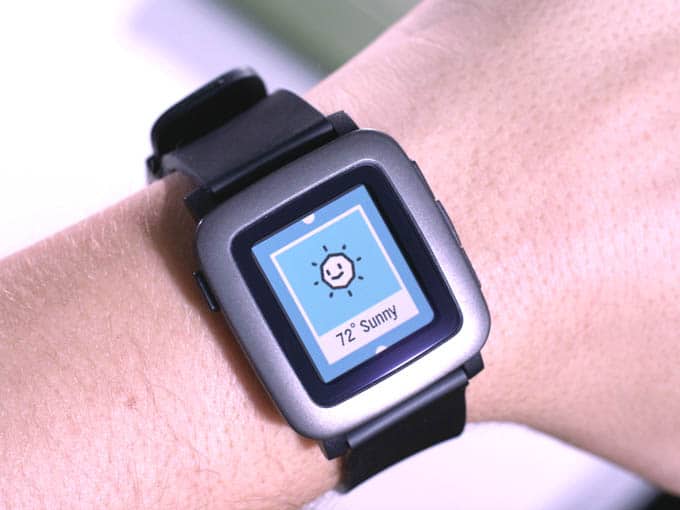 The day has finally arrived. And it’s called “Pebble Time.” After a much-hyped and significantly marketed countdown, the smartwatch maker that could, Pebble, announced today a Kickstarter campaign to fund a new model featuring a color e-paper display.

No, this is not 1992. Up until now the Palo Alto-based start-up produced smartwatches, both the original and fancier “Steel” models, with old school black and white screens. In a world of 4K and high density 440+ ppi smartphone screens that might come as a shock. But it was a savvy move by Pebble. Because it employed low energy, non-color displays, Pebble smartwatches solved several key problems facing most rivals: battery life and outdoor readability.

Pebble is looking to raise $500,000 to build the new Pebble Time watch. The Kickstarter campaigns runs for 31 days.

In addition, the new model will feature what the company is calling a “timeline interface” which will highlight “what’s important in your day.”

Other items of interest related to Pebble Time:

– battery life is still rated at 7 days, even with the new color display (bravo!)

– Pebble Time is 20% thinner than the original Pebble

– All 22mm watch bands will fit Pebble Time, which features a quick-release pin

As always, those who back the Kickstarter campaign will benefit from extra goodies, not to mention being among the first to score a Pebble Time at a below retail price.

I’ll admit it to all: I love my Pebble smartwatch (Life with Pebble — There’s no going back). It’s a black plastic freak on my wrist to be sure. Very geek. Slightly 80s. And tres cool. More importantly, it’s functional. First and foremost, it’s a watch. And unlike Android Wear devices, the display is always on. With the flick of my wrist I can activate the backlight — which also serves as a handy flashlight when searching for Skittles in the dark. Notifications work as expected. Facebook, Twitter, Google Hangouts. All there, and plenty more if you really enjoy the vibrations. “Music Boss” is one of my favorite apps for Pebble. I can use the physical buttons (no touch screen here, folks, and all the better for it when blindly reaching for Pebble while, say, driving) to control music tracks on my phone, be it Google Play Music, Pandora, or other music services. Very handy while driving, or at the gym.

Pledges for the new Pebble Time start at $159 for the “Early Bird.” That will get you a Pebble Time watch (retail $199) in any of the three colors, with an expected ship date of May 2015. Count me in.