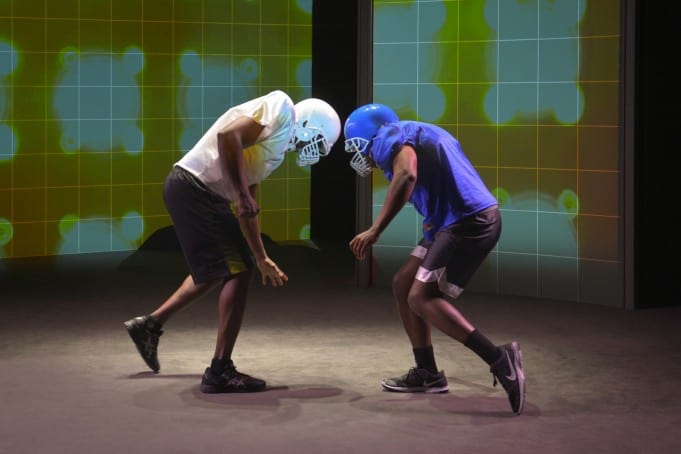 A Super Play just in time for a Super Bowl. Cy Ashley Webb checks out X’s and O’s (A Football Love Story) at Berkeley Rep, a play that examines the traumatic effect our most famous of sports has on players and families.

Most love stories lapse wistful – and in this respect X’s and O’s (A Football Love Story) is no different. From the very first moments, the balletic slow motion accompanied by the soundtrack of cheers and electric visuals ropes you in for what will be an entrancing 85 minute ride. As you’re pulled into whatever high drama is happening off stage, you’re reminded why football’s truly America’s past time. Only the voiceover – reminding the audience that “the names have been changed… so we don’t get sued” – signals that this tale of modern gladiators isn’t about living happily ever after.

In staging this world premiere, the Berkeley Rep erred on the side of authenticity. Co-creator Jenny Mercein’s dad was Chuck Mercein, fullback for Giants, Jets, and Green Bay in the 1960’s. This gave her access to players, coaches, doctors, families, and fans. Mercein’s interviews provided the foundation for playwright and football maven KJ Sanchez’s script. The show’s hyper-realism doesn’t end there though, as the cast includes two-time Superbowl champion 49-er Dwight Hicks. From the audience perspective, every lighting cue and every sound cue work to heighten this realism and transform the Berkeley Rep’s thrust stage. In lesser hands, this hyper-realism could feel mechanistic and antiseptically cold, but here, it’s so well done that it only pushes the story forward.

X’s and O’s feels like a documentary on the contradictions of football, which can be framed in terms of blood sacrifice of young men in service to the corporate gods. You don’t have to look too far to write the rest of that story, which involves taking a stab at explaining just why the nonprofit NFL can rake in an untaxable ten billion a year. However, politicians waving the tax reform banner are unlikely upset that apple cart, since the contractions of football mirror those of the country. 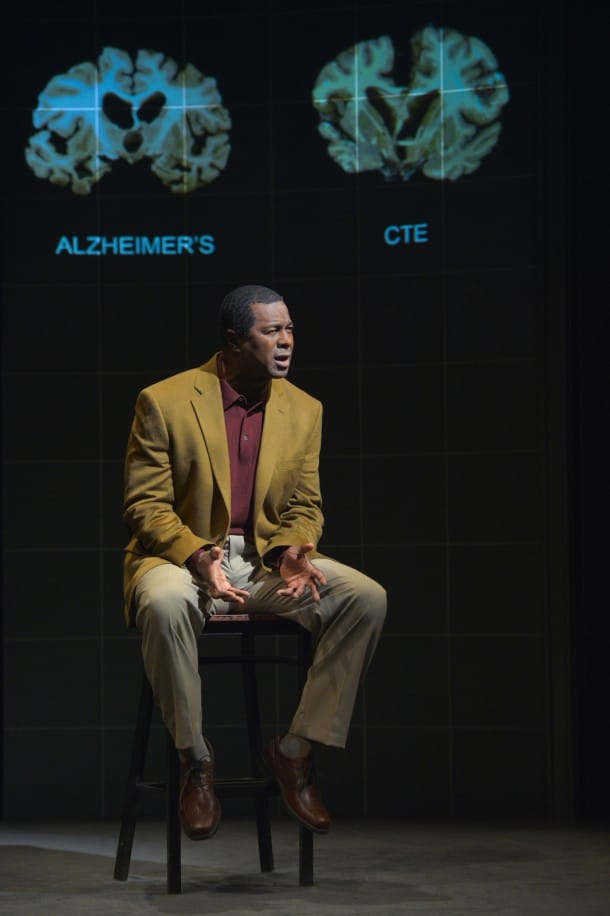 X’s and O’s feels like a documentary on the contradictions of football, which can be framed in terms of blood sacrifice of young men in service to the corporate gods.

Before you start to feel harangued by the social constructions of the game, the scene shifts to family dramas that happen in a dimension more immediate than the documentary. Here is where the real stories of early Alzheimers and CTE (chronic traumatic encephalopathy) play out.

While these multiples story lines all advance the underlying message, the blur between the two (are the family scenes part of the documentary?) creates a tension that pushes the story forward. This blurring occurs at other levels, including the notion of a play that feels like television. This happens so effortlessly, you may not be conscious of how intelligently it was put together until the next day. 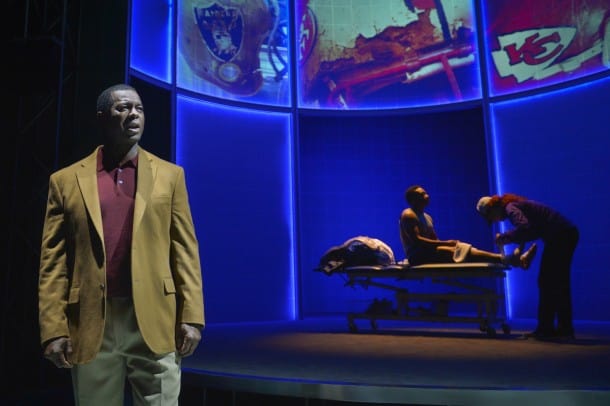 Casting and blocking created visual geometries on stage that persistently bring you back to why we love this game. The pairing of Dwight Hicks with Anthony Holiday, Marilee Talkington with Jenny Mercein, both groups flanking the baby-faced Eddy Ray Jackson and sportcaster-handsome Bill Geisslinger, felt as polished as a half-time show. This insistence in returning to the cultural high we get from this game kept giving the audience a hit not unlike that we get off the real thing. These x’s and o’s will have you blowing kisses.