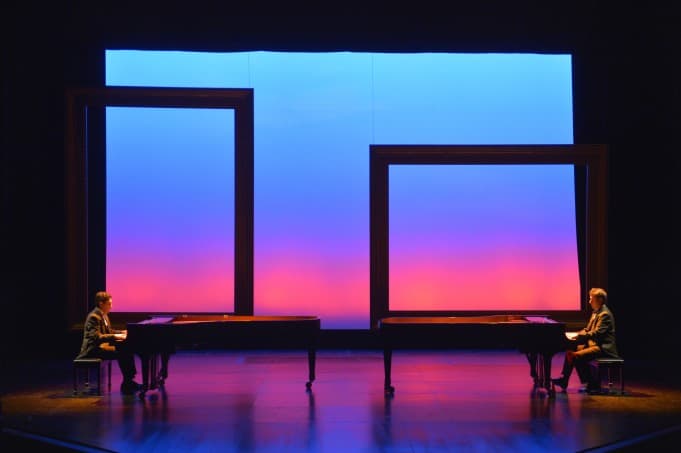 This play has scenes that will be familiar to any piano student – be they one who quit after stumbling through Hoagy Carmichael’s “Heart and Soul” decades ago, or one whose repertoire includes all of Chopin’s etudes. That authenticity is the show’s strength and its weakness. I suspect the further you are from this material, the more meaningful the show will be. If you are close to it, it presents more of a work-a-day world – while almost ducking the key issues that confront that world – like why classical audiences are dominated by shrinking audiences of people even older than me.

That’s not to say that 2 Pianos 4 Hands isn’t genuinely funny. The dialogue is tightly crafted and the killer timing of Darren Dunstan and Christopher Tocco is evident in the very first minutes. Moreover, this is the fourteenth time Tom Frey has directed this work over the past 15 years, and with more than 800 shows under his belt, he’s doing something right. So seamless was the performance, the usual opening night nits just didn’t exist. This show is the perfect introduction for those who are curious what the often-grueling track to becoming another musician trying to not get stuck in contractor hell is really like. 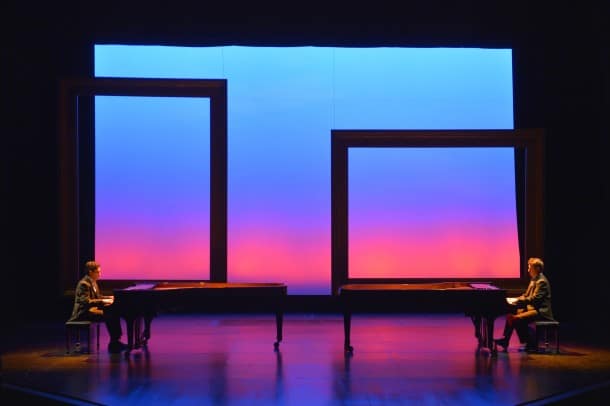 However, for others who’re a wee bit closer to the topic at hand, the show might feel as static as the two grand pianos that face each other on stage. You want to breath air into this – give it something more diverting than another piano teacher and piano competition. While some of Dunstan and Tocco’s characters are drop dead funny (Sister Loyola will give you a few minutes on your knees in laughter), and some situations (one-handed or two-handed arpeggios?) will crack you up (yes, piano teachers can be as obstinately inconsistent as the most pig-headed bureaucrat), there’s an unmoving quality to this that I found wearing.

This show is the perfect introduction for those who are curious what the often-grueling track to becoming another musician trying to not get stuck in contractor hell is really like.

Many will find that the actual music saves this production. There’s so much less piano music in our daily lives than there used to be – and you’ll feel that absence even more keenly after this show, especially if you’re one who’s found almost no reason to go to Nordstrom’s after they axed the pianist who made shopping there something to get excited about. Music selections are all over the place, including music you may have played (first movement of Mozart’s Sonata # 16 in C Major), music you wished you played better (Chopin’s Prelude No 15 in D flat Major, “Raindrop”), music you may have sweated over (Brubeck’s “Take Five” – darn 5/4 key signature!), and music you wouldn’t dream of attempting. Stuck in the middle is a delightfully fresh pop medley. We need more of this in our everyday lives – and in that respect, 2 Pianos 4 Hands provides a needed fix.

2 Pianos 4 Hands will be at the Mountain View Center for the Performing Arts through February 15th.