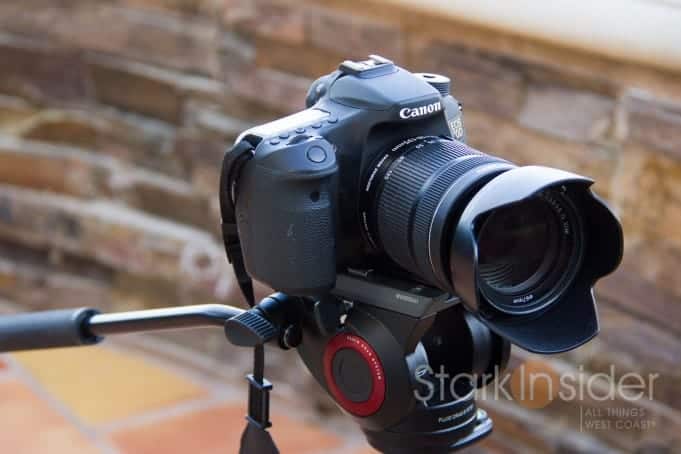 If you’re looking for the best all-around lens to shoot video with a Canon DSLR, I have a simple, time-worn recommendation:

Well made, reliable, and fairly fast, this flexible lens has been in my collection for over a year and has not let me down once.

I’ve used the zoom to shoot a variety of videos for Stark Insider — wine videos, interviews, concerts, food events (I’ve included samples below shot with this lens). It’s mounted on my EOS 70D about 90% of the time. For special shots, be it in low light, or to get an avant garde cinematic look I will occasionally switch it out (typically for the Sigma 18-35mm or a Rokinon 85mm).

There’s an expression: the best lens is the one currently on your camera.

I generally agree with that sentiment. And with this Canon 18-135mm lens chances are you will have the best lens in any given situation. You can shoot close-ups, wide shots, pretty bokeh (the narrow focus look often seen in movies) and, best of all, if you pair it with a camera like the 70D you will get auto-focus. This gives you the best of both worlds: the versatility of an everyday camcorder, combined with the flexibility (primarily the ability to change lenses) and cinematic provided by a DSLR.

Here’s why I particularly like this zoom lens by Canon.

A lot of lenses have auto-focus, but this one enables you to shoot a subject (say, your son or daughter at their birthday party) continuously while retaining focus. It’s quiet too, so little to no noise is picked up by the internal microphone when you’re recording. It works exceptionally well – and Canon has really pushed the envelope in regard to auto-focus with the likes of Nikon and Sony playing catch-up. Tap the touch screen and you can chose your focal point. This is handy for simulating “rack focus” shots – a technique used by filmmakers to change the point of interest in a shot. 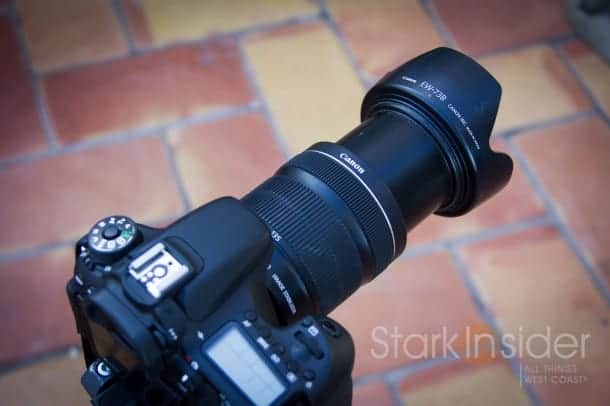 Because this is a zoom lens, you can get the right framing for just about any situation. At the wide end (18mm) you can get decent wide angle shots (keep in mind, a “crop” DSLR such as the 70D adds a 1.6 multiple so a 18mm focal length is actually equivalent to about 29mm). At the same time, you can quickly zoom in to get a close-up. I probably tend to over-use close-ups in my Stark Insider videos – but for better or worse I seem to always have that saying in the back of my mind, “don’t start recording until you see the whites of their eyes.”

Last I checked on Amazon, the Canon EF-S 18-35mm lens is going for a nice discount on Amazon. A veritable steal. Sure, it’s not the vaunted “red ring” lenses you’ll find many pros using. But, remember what we talked about earlier… the best lens is the lens currently on your camera. More importantly, it’s how you use it. I’ll say this in lieu of anything more profound: shoot often. Practice. Edit. Publish. And learn day-to-day. 4K video? Sure, sounds nice and all, but in the end it’s about telling a story, sharing an experience, and/or invoking emotion. In my experience, this lens can accomplish all that no problem.

This zoom lens will change aperture as you zoom in – in other words, the image will get darker. In many cases this change wont be perceptible, but in other cases you should adjust the aperture (f-stop) to compensate. Another solution: adjust brightness during the editing process.

To get utmost sharpness, turn off image stabilization. For the most part you want it on (it makes a huge difference in keeping shots steady), but it does reduce clarity ever so slightly – if you want razor sharpness, turn off IS, and use a tripod to get that super impressive close-up or macro shot.

The sun can makes things tricky. It can make it hard to view the LCD on your camera (a loupe or external monitor can help), and it can also make it hard to get proper exposure. I shot a lot in California where the sun is often ridiculously bright. By putting on a “neutral density” (ND) filter I can darken the image and thus get proper exposure, and depth of field. They’re not expensive, and can make a world of difference. Get one if you shoot outdoors!

Someone once told me to shoot at least 15 seconds of any one scene. Whether it’s a wide shot of the ocean, a close-up of someone smiling or talking to the camera, or just some random shot or b-roll of an event or scene, you should always record at least 15 seconds (usually, with typically no camera movement – keep it steady).

Unrelated to the topic of lenses, but worth mentioning is sound. Sound is king. You’d think video would be the most important aspect to shooting video. But, think back to a great documentary you recently watched. Chances are it had shaky footage at some point, maybe black and white archival footage. I’m guessing it had no detrimental impact to the emotional impact. Whereas bad sound (hiss, echo, low volume) can turn viewers off in an instant. My suggestion: get a decent shotgun mic like a Videomic Pro, or, even better, shoot dual sync (record audio on a separate field recorder and later sync that up in Premiere Pro or Final Cut).

If someone was just starting out in DSLR video and wanted to know the one, be-all to end-all, most versatile and easiest to use lens it would no doubt be the Canoon 18-135mm zoom lens. Yes, there are better lens for making films (you’ll want to buy or rent a set of primes) and if you find yourself constantly in low light environments you’ll want something faster. And, yes, it’s presumptuous, preposterous even, to suggest there’s “one best lens for shooting video” so take it all with a grain of salt, depending on your particular application. But I’ve shot a lot with this lens, even at times next to CNN, Food Network, TIME, and local news affiliates, and the results that I get from this little zoom lens never fail to impress.

Put this Canon zoom on your DSLR (preferably something like the EOS 70D so you can take advantage of that buttery smooth and quiet auto-focus feature) and get out there and shoot, shoot, shoot.

Look for this Canon lens on Amazon, where you can also look for it in “bulk packaging” for even less. Also, check your local Costco or big-box retailer where you’ll often find this lens included with the Camera body. You’ll be up and running in no time.

The Art of Hall Wines