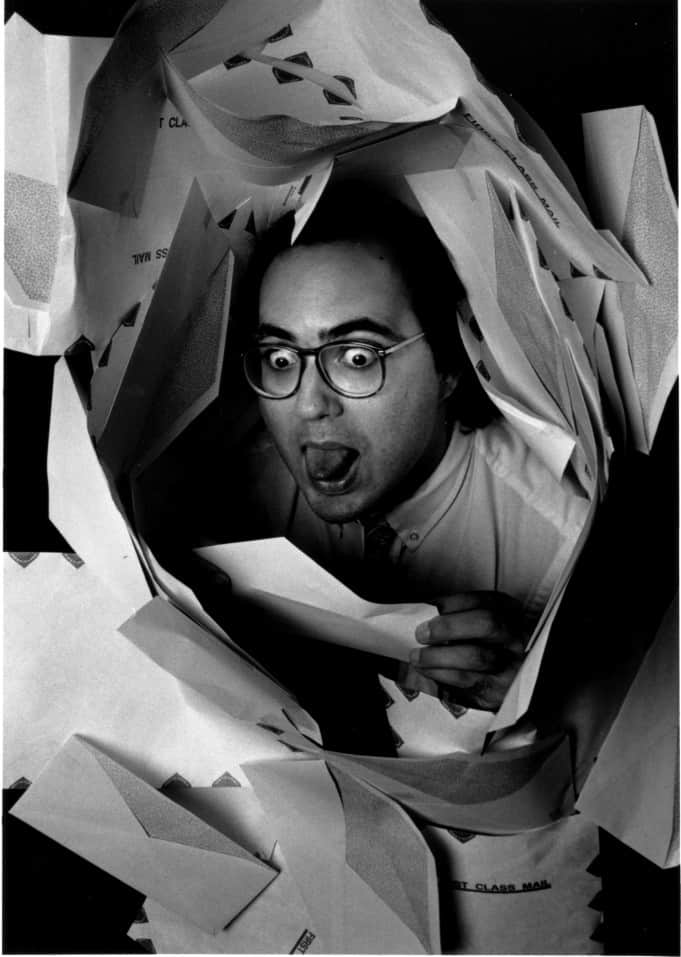 Cy’s latest theater adventure takes her to The Marsh San Francisco for the reboot of Haiku Tunnel.

Josh Kornbluth has one of the most manically expressive faces I’ve ever seen. This isn’t always good thing for an actor as it can become a limitation. Has anyone ever really seen Jack Nicholson play anything but himself? However, Kornbluth’s expressions reveal more than they deflect as he balances between a charming vulnerability and the full-out narcissism of a 20-something who’s manipulating the world as much as being manipulated by it.

Kornbluth first performed this one-man show 25 years ago – back when reviewer Robert Hurwitt called it “a thoroughly funny 80 minutes with one of the most subversively original minds in theatre.” Founder and artistic director Stephanie Weisman is reprising it at the San Francisco Marsh – with other early works throughout 2015, as part of the Marsh’s ongoing 25th anniversary celebration. Other than a passing reference to VAX systems, which will hopefully go straight past the under-30 set, the show remains timely – as it will as long as 20-somethings temp and humans creatively adapt to automaton-like jobs.

Creative adaptation is key to this one man story, which positions Kornbluth as a legal secretary making the transition from temp to “perm” – with all the psychic adjustments that go with it, such as scuffing off the temp eager-to-please-ness, coming in late, working up elaborate story lines for cover, finessing the fact he’s not doing anything, and everything else that goes with holding down what a friend’s son calls a “jobbie job” – those crappy slivers of employment many of us knew too well in our ‘20’s that try the patience of any animate organism more complex than an intellectually challenged potato. Anyone who’s been there knows the comfort derived from holding onto mindless tasks – or in not mailing 85 very important legal docs.

Kornbluth’s creative adaptation of the employed life takes this several steps further – and makes for a suspenseful story line, all while remaining very, very plausible. His delivery makes it easy to see why this work’s had a busy life since it first appeared at the Marsh. Although Haiku Tunnel made it to the silver screen in 2001 (a movie trailer still kicks around the net), his solo performance trumps the movie easily. Kornbluth’s got the law firm culture down – a world in which even summer associates trump the admins and paralegals who really keep the place running. By playing all the roles himself, he keeps the story close to his chest, which makes it look far smarter than the movie.

Haiku Tunnel is at the SF Marsh through February 7th. Don’t confuse it with his other show, Reports from the Zen Hospice, which he performs at the Berkeley Marsh.