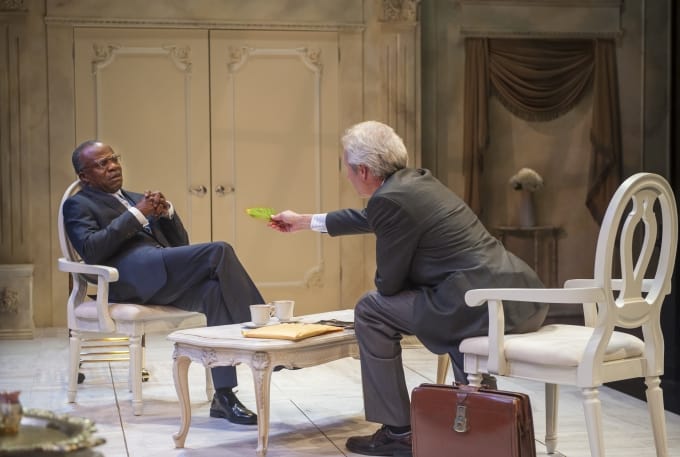 Peter Callender is one of most arresting actors in the bay area. He draws you in and keeps you there, leaving you to hang on every flicker of expression. Once he has you, he unwraps his characters so slowly that you’re still trying to figure them out the next morning.

This might be a  little disconcerting when the character who’s taken up residence in your head is Robert Mugabe.

When you spend time with Callender’s Mugabe, you’re not just spending time with a cartoon African despot who becomes the embodiment of a state so corrupt and unpredictably violent that you wonder just how much can be chalked up to the colonialism and how much to human nature.

Set design at the Aurora continues to astound.

Breakfast with Mugabe, a work by Fraser Grace enjoying an extended run at the Aurora, takes you other places as well. This Mugabe is possessed by a ngozi, the malevolent spirit of his executed brother in arms, fellow Rhodesian freedom fighter, Josiah Tongogara. This distresses the despot, jeopardizes his upcoming election, and needs to be handled.

To deal with this ngozi, white psychiatrist Dr. Andrew Peric (Dan Hiatt) is called in. Power struggles between Mugabe and Peric occupy a good part of the play. However, Mugabe isn’t going to give it up easily. He reveals himself more in the drumming of his fingers inside his palms – and extracts a price for being reduced to such a state.

Callender’s considerable acting talents aren’t the only thing that keep you glued to this play. The tone is set the minute Leontyne Mbele-Mbong first walks on stage. So commanding is Mbele-Mbong’s Grace Mugabe, you recognize she’s a fine match for her husband. Exquisitely sensitive to the impact of style, status, and gesture, she lacks the buffoonery that defines her husband – and is all the more chilling because of it.

Adrian Roberts, who wowed everyone as Martin Luther King, Jr., plays the Mugabe bodyguard, Gabriel. In what would otherwise be a throw-away line early in the play, Mbele-Mbong establishes that Gabriel knows everything, including how to increase the odds of saving his own neck. As controlled as his MLK was garrulous, you watch Robert’s character closely. He’s the only insider who can decode this strange world – if he’s so inclined.

Set design at the Aurora continues to astound. Recreating the cold marble interior of the Mugabe palace is amazing enough, but to recreating it on the tiny Aurora thrust stage without looking like you’re trying too hard can be attributed to the magic of Nina Ball.

Breakfast with Mugabe is a complex work, operating at multiple levels. The complexity of some plays – say Tony Kushner’s Intelligent Homosexual’s Guide to Capitalism and Socialism with a Key to the Scriptures – is driven by the script. Kushner’s non-stop chattiness makes you want to stop the characters so you can take notes.  However, this work is driven by the character’s silences, mannerisms, and back stories. I kept feeling like I was missing something important, something that would better explain the ending. Whether this sense can be attributed to the implausibility of the Mugabe regime or whether it can be chalked up to some ignorance on my part is unclear, but I suspect others in the audience came away with the same feeling. However, this was a small nit in an otherwise excellent production.

The Aurora consistently brings us smart, intelligent theatre – and Breakfast with Mugabe is no exception.  This cast – and director Jon Tracy – bring it off brilliantly.