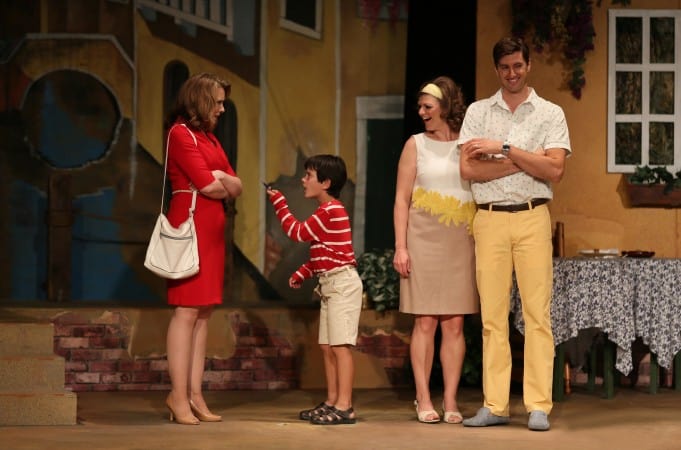 Do I Hear a Waltz?

Some plays have such a difficult production history than you wonder how they ever made it to the stage. I’m referring to, of course, the 1965 Broadway production of Do I Hear a Waltz, not the splendid job that 42nd Street Moon is doing with the same. Even Wikipedia’s stultifying prose can’t mask the drama. With Oscar Hammerstein recently dead, Arthur Laurents and Stephen Sondheim at odds, and Richard Rodgers’ alcoholism exacting a price, one wonders what was happening to the great men of American musicals. In retrospect, the disappearance of this work is no surprise, despite its two Tony nominations.

This back history, however, barely hints at what a great show they were fighting about. This comparison of European and American attitudes toward marital fidelity suggests that while Americans aren’t as sophisticated as we like to think, we were far more sophisticated in the early ‘60s than we tend to remember.

This cross-cultural peek works so well, in part, because Emily Skinner (Leona Samish), Michael Rhone (Lloyd McIlhenny), Lucinda Hitchcock-Cone (Edith McIlhenny), and Abby Sammons (Jennifer Yaeger) and David Naughton (Eddie Yaeger) are in-the-moment perfect at capturing the wide-eyed enthusiasm of Americans in Europe at a time when being an American travelling in Europe was less fraught. That some of these characters are a bit  two-dimensional only  enhances the humor  and highlights the nuanced performance of Skinner, who packs her own Love Boat fantasies for this European jaunt.

Stephan Rhoads (as the Italian inn-keeper Signora Fioria), Tyler KcKenna, (as Leona’s very married Italian suitor Renato di Rossi) and Taylor Bartolucci (as housemaid Giovanna) form the European side of this equation. Signora Fioria has the particularly European knack of incorporating her age as an element of her style. For his part, Renato di Rossi is as sincere as his American compatriots, but unlike them, lives easily in his accommodations to the married state. Giovanna is the comic of the group, who provides a handful of gut-buster moments.

This show had so much going for it. Greg MacKellan’s superb direction created nuanced characters. Felicia Lilienthal’s early ‘60s dresses nailed the style without becoming a cartoon. Piano music was provided by resident music director Dave Dubrusky, who performed upstage.

Off notes are few and far between. The set was vaguely cluttered and sound sometimes inaudible, but both of those were largely functions of the small Eureka Theatre – and in truth, neither particularly detracted. Emily Skinner’s frequent costume changes created mild confusion regarding pacing.

Do I Hear a Waltz? runs through October 19th.