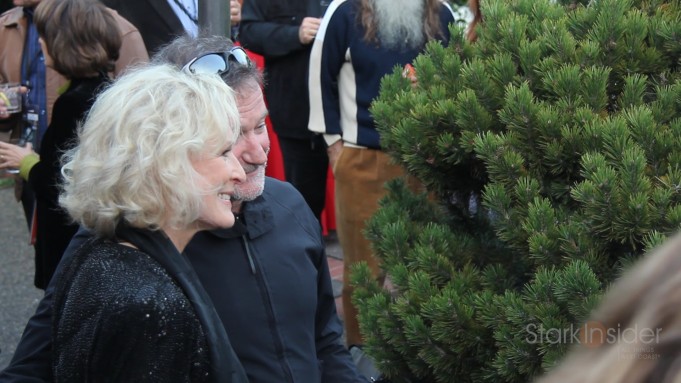 Terry Gross interviewed Robin Williams in 2006. I happened to catch the tail-end of that thought-provoking, funny, and, in light of the news, sad, segment on NPR.

Listening to the interview while running an errand in the car brought fond memories of the brief encounter we had with him while covering the Mill Valley Film Festival for this site. At the time I remember his appearance was a surprise. The evening belonged ultimately to actress Glenn Close who was promoting her new film and receiving a special tribute from the organizers. He might’ve been there to support her, or maybe he was there because he lived nearby and wanted to meet up with friends, other film industry folks. Whatever the case, I was floored by how laid back he was, and how approachable and open he was to anyone–fans and media alike–who approached. True to what I had read about him he was anxious to make anyone within earshot laugh or smile. Even if just a bit. In crowded situations that Julliard-trained theater voice definitely came in handy!

Our encounter with Robin Williams was ever so brief, but it’s a moment I’ll never forget. No posse surrounded and guarded his every move. There was not a publicist in sight. He gave as much time as anyone wanted or needed, and then some. Just his reserved presence brought a special thrill to the occasion. That he as so gracious and humble just reinforced that stardom has plenty of room for good people. After that, he quietly sat down on a nearby seat-wall, took out his iPhone and went about his own business.

I dug into the archives to review the raw footage, if only out of curiosity and to relive that special evening. I posted it on my Facebook page and ultimately decided to post it here too, ridiculous camerawork and all.