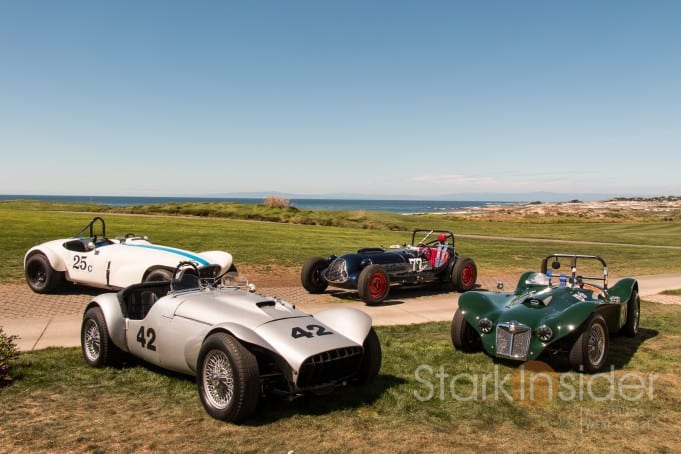 We’re taking the show on the road and to the coast. Every time I take the hour drive down south from Silicon Valley (and through the Santa Lucia Highlands wine country – more on that to come, stay tuned) to Pebble Beach I’m reminded of just how ridiculously, amazingly, stunningly beautiful the landscape can be here in Northern California. I’m guessing the Pacific Ocean might have something to do with that.

Yesterday I attended the presser for Pebble Beach Concours d’Elegance. The relaxed event at the Inn at Spanish Bay featured the premiere of the auto doc Racing Through the Forest (more below). There were a few short speeches officially launching the event, and later an entertaining panel with former Pebble Beach race drivers – when you hear about the “crazy ones” surely these guys are near the top of the list. 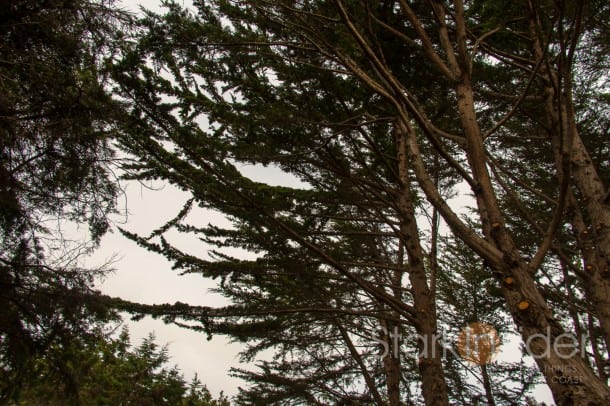 Concours is now in full gear. Today (Thursday) features a tour. All manner of incredible automotive art, history, and trivia, make their way through 17 Mile Drive. Spectators line the streets to admire. Trophies are later awarded in the afternoon. It’s pretty magical stuff, what with the fog and all:

Racing these days is consigned to the world class Laguna Seca track up in Sonoma. Concours has become a famous spectacle and celebration of all things automotive. The marquee event takes place on Sunday when the eighteenth green at the Pebble Beach golf course gets transformed into a magnificent, sprawling car show of epic proportions. We’ll be on location to shoot a segment for Stark Insider. I truly can’t wait. The scenery, the cars, the people. What will be hot this year? What will car enthusiasts have to say about the industry, state of collectables? And what crazy, HP super-sized exotics will be rumbling on the grounds? Stay tuned, we’re just as anxious to find out.

RACING THROUGH THE FOREST

If you’re a fan of American car racing you must absolutely see the new film Racing Through the Forest.

The 80-minute documentary traces the roots of the sport back to 1950 when a letter from Sterling Edwards would lead to the idea that a racetrack could be a viable proposition at Pebble Beach. These were different times. Drivers would often race their cars on public streets to the track itself, before racing once again (two races in one!). Through a series of interviews (50 in total including Fred Knoop, Mick Martson, Bill Pollack, Jim Hall and Phil Remington), filmmaker Dean Kirkland does well to entertain, inform. Archival footage and profiles of various MGs, Alfa Romeos, Ferraris and Porsches of the day. Great stuff. Smartly there’s just enough information about the car designs, engines and other technical aspects without going so deep as to potentially lose the casual viewer.

“It was the romantic era of racing.”

One memorable character is the film is a starter – the guy who herds the cars at the beginning of the race before giving waving the start flag. This is also the same guy who waves the checkered flag at the finish line. Turns out this particular starter could “jump like a kangaroo” which was quite a visual hoot apparently. At the finish line he’d wave the flag vigorously and move as close to the winning car (moving at incredibly high speed) all while jumping. Why the dramatics? To ensure his photo would appear in the newspaper the next day. Turns out it worked like a charm, race after race.

We also hear from a charming Spaniard, one that now owns the famous Porsche Speedster raced by legend Phil Hill – a guy who “could make a car dance.” Seems like history here with this car is in good hands (note: I was unsure if the image of Jerry Seinfeld in the car indicated he was now the owner, or possibly former owner?).

“If you don’t come first, you don’t get remembered.”

I liked that the filmmakers gave as much attention to the non-star drivers as they did to the ones that would go on to garner international acclaim. Amazing how one missed shift can forever alter a career.

And if racing at Pebble Beach started with a dream, it ended in tragedy. In 1956 Ernie McAfee spun out, hit a tree, and died instantly. That would be the last race ever among the pine trees. A short drive up north, Sonoma County would be home to the newly built, modern track Laguna Seca. And, incredible to imagine, built all for the sum of just $100,000.

WATCH: Trailer for RACING THROUGH THE FOREST