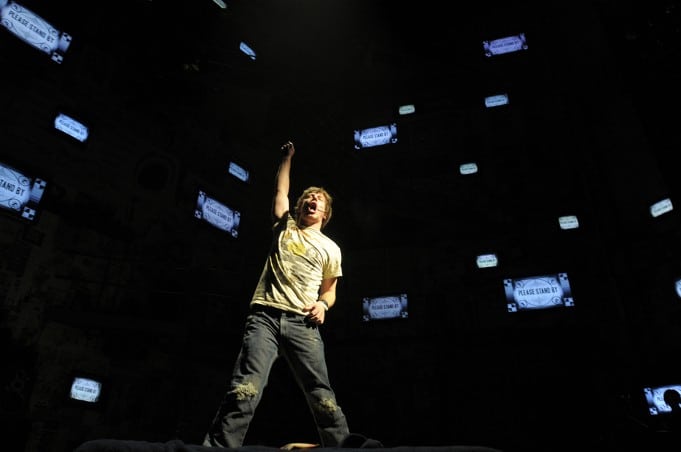 We all make mistakes. At least that’s my (admittedly lame) defense.

After all the years I must fess up: I got it wrong, way wrong.

In 2009, I reviewed the then new musical American Idiot at its birthplace, the Berkeley Repertory Theatre. I gave it–cringe–2.5 stars out of 5. In other words, I didn’t think it was very good.

Yet, after all these years if there’s one show I think about the most it would be American Idiot. The imagery was searing. The set was impossibly tall and spectacularly industrial. Metal stairways snaked their way around the perimeter. Flat screen TVs – everywhere, enough to do any Costco entrance proud.

Then that performance. In the lead role as Johnny, John Gallagher Jr. shredded the stage. It was one for the ages. Surely it must have taken at least a dozen stage hands to crank him up backstage before each show. Punk rocker one moment. Angst ridden lover the next. Before finally: suburban malcontent. He absolutely owned it, and, from that point on, it would be hard to imagine anyone else playing the role as convincingly as Gallagher.

As it’s heart, of course, is the music.

American Idiot is one of my favorite albums of all time. And it is that rarity of rarities: a real, honest-to-goodness, album; a rock opera, much in the vein of what Queen used to produce. Billie Joe Armstrong’s writing is supreme. Yes, it has the requisite sex, drugs and rock ‘n roll. But in Armstrong’s lyrical hands it goes far deeper. When I re-read old reviews online I was surprised to learn the album is coming up on its tenth anniversary (September 20, 2004). That post-9/11 period was a dark, intense, fearful time. It’s easy to forget that now, what with a life filled with Uber, Angry Birds and smartwatches. If anyone could rightfully represent the confused and angry youth at the time it would be Armstrong – the streets of Oakland gave him cred.

So the music was great. The stage adaptation was, in retrospect, top notch. The performances were energetic and memorable. The set, incredible. The direction, flawless.

What gives then? Why on earth did I give it such a low score? (and corollary: would and should anyone really care in the end?)

I remember walking out of American Idiot on that gorgeous fall evening in Berkeley, and thinking that these kids amounted to nothing more than spoiled brats. Here they are, growing up in a first world country, dabbling in excess, and complaining about war. No solutions. Just whining. Everything sucked! They were an unlikable lot, I thought at the time; zero ambition and zero contribution. I wondered why the show had to be so nihilistic. Shouldn’t there be light at the end of that tunnel? Note to self: maybe The Lion King is more my cup of tea.

WHAT PROVOKED ME TO REEVALUATE THE CLINTON IDIOT?

I recently watched the documentary Broadway Idiot. I was smitten. It’s a wonderful take on all the hard work and effort that goes into building a brand new musical from the ground up. Look for it on Netflix.

Back in 2009, we had just started reviewing shows on Stark Insider. Hundreds of shows and five years later I wonder what I would think of American Idiot if I saw it today. I suspect I’d give it a perfect rating – it’s easy to forget too how difficult is to bring a new work to life, and, in this case, one that would ultimately make a successful run on Broadway.

American Idiot, the album and the musical, are the kinds of work that make the world if not a better place, a more interesting place. Not because of the f-bombs and relentless darkness of the material, but because they are uncompromising pieces of work. They emphatically capture the mood of a time and place. It’s not a grown-up adult version of how we perceive our youth. It’s a youth’s view of themselves trying to cope in a hopelessly f’ed up adult US of A. Who’s really the confused and disenchanted?