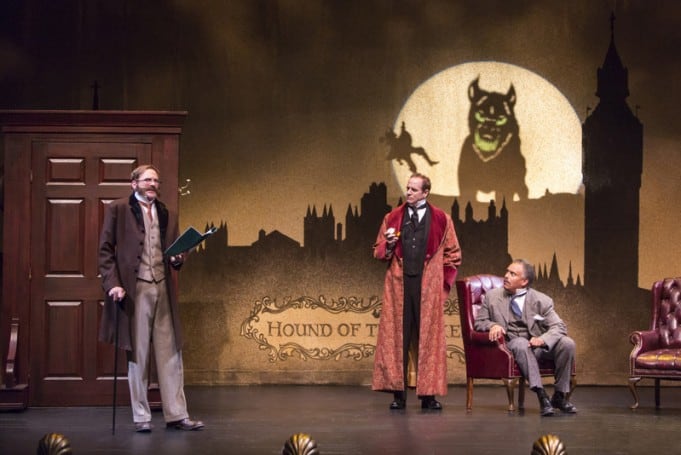 Hound of the Baskervilles

TheatreWorks’ Hound of the Baskervilles is especially for folks who aren’t fans of Sherlock or Arthur Conan Doyle. Having sat through one abysmally dreary and tediously long “Hound,” I confess, I was not looking forward to another. However, any notion that the TheatreWorks production would be more of the same got quickly put to rest.

This adaptation by Steven Canny and John Nicholson is nothing like the tedious Hound. Many liken it to 39 Steps (that is, the hilarious play that opened roughly a decade ago, not the 1935 movie). This version stays true to its Brit roots, in a way never imagined by Arthur Conan Doyle. Instead, imagine Monty Python doing Sherlock with gay spoofs and cross-dressing, and you’ll come very, very close.

This worked so well because of the enormous talents of Ron Campbell, Darren Bridgett, and Michael Gene Sullivan. Although Campbell’s primary role is Sherlock Holmes and Bridgett’s is Sir Henry Baskerville, these two cycle through so many other roles that you’re not 100 percent who is who unless you see them in bed together. Michael Gene Sullivan remains fixed in the tweedy role of Watson, complete with bowler hat, which he offers up with such deadpan seriousness and superb comic timing that were the others not so strong, he would have walked off with the show. 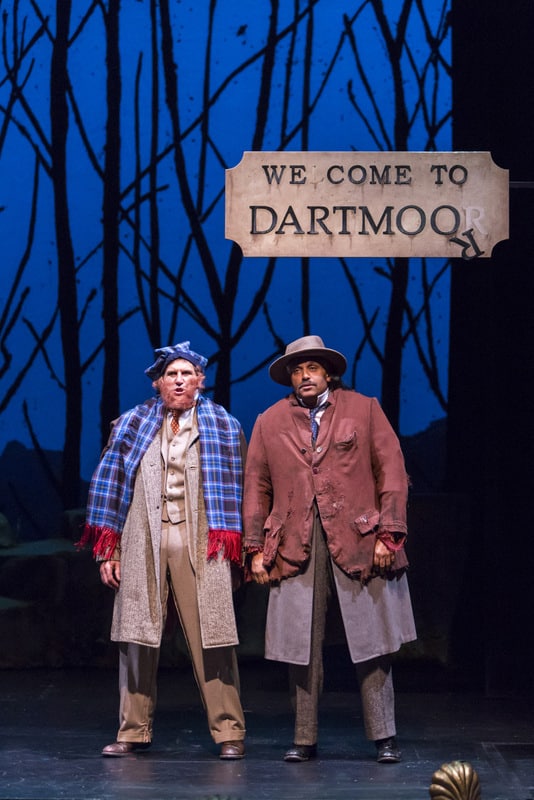 The second half opens with a rapid-fire reiteration of the first half. As a dear friend sagely observed, this could have been “a greedy theatre thing,” but for the fact that it was so darn good. Repeating the funniest bits of the first half gave rise to new laughs (if anyone out there knows how both gentlemen fit through the picture frame simultaneously, just drop me a line) and provided some clarity as to who was playing what characters.

Scenic designer Andrea Berchart alternated between a light touch and luscious richness.  By reframing the stage with a beautiful deep burgundy proscenium with gold trim, she took us right back to turn of the century when the story was originally written, which properly anchored this delicious spoof. However, foregoing the recreation of the entire Baker Street and Baskerville residences kept the play appropriately light. Instead, she relied on a few key pieces such as rotating doors and window frames to create a world separate from the moors, which kept things from getting stuffy.

Hound of the Baskervilles runs through April 27th  and is well worth taking in before this legendary hound takes its leave.