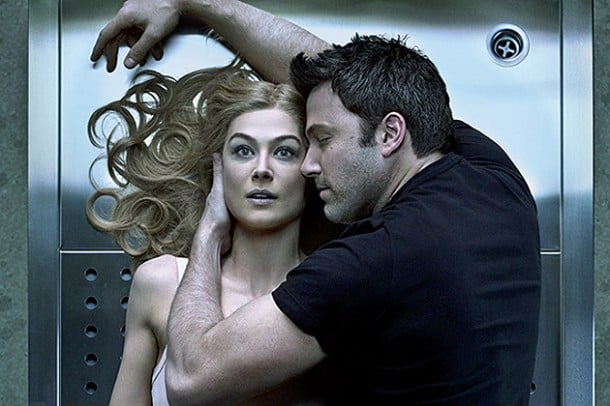 Fincher, apparently, is still into green. The trailer for Gone Girl starring Ben Affleck is making the rounds today. At ninety-seconds the preview unfortunately does little to make the film look all that compelling. But, it does prove that director David Fincher–clearly one of this generation’s best–still famously loves green color grading.

If you followed Fincher’s career behind the camera, from middling Alien 3 (1992) to taught Panic Room (2002) and most recently to blockbuster vehicles such as The Social Network (2010) and The Girl with the Dragon Tattoo (2011), you know this director has a most unique (and often arresting) visual style. A lot of that has to do with the heavy use of green-based casts that tend to give his films a dreamy, ethereal quality.

Like we saw in the creepy, visceral Se7en (1995), Fincher once again cloaks his scenes in darkness. Even broad daylight seems less bright.

Another favorite Fincher calling card is the low camera angle. Often he’ll place the camera well below traditional angles, especially when shooting conversations. The result is characters who appear larger than life, with commanding presence – even when portrayed by actors with less than intimidating physical characteristics (Jesse Eisenberg as Mark Zuckerberg in The Social Network is a good example).

And, how does Gone Girl look?

If the idea is to always put the best stuff into a trailer, then if I’m at New Regency I’m getting a little nervous. This is one plodding trailer. A wife is missing. A absolutely horrendously mismatched song (intentional?) grates. Ben Affleck is angry.

Given that this is a Fincher film, with a major star attached, Gone Girl will likely do okay, at least on opening weekend. But, based on this trailer, it’s off to a rocky start. The film doesn’t open until October and is still in post-production, so a lot can change before opening. Watch the trailer for Gone Girl below.

Note: In this brave new world of 4K and UHD why did the producers release the trailer in only 720p resolution?