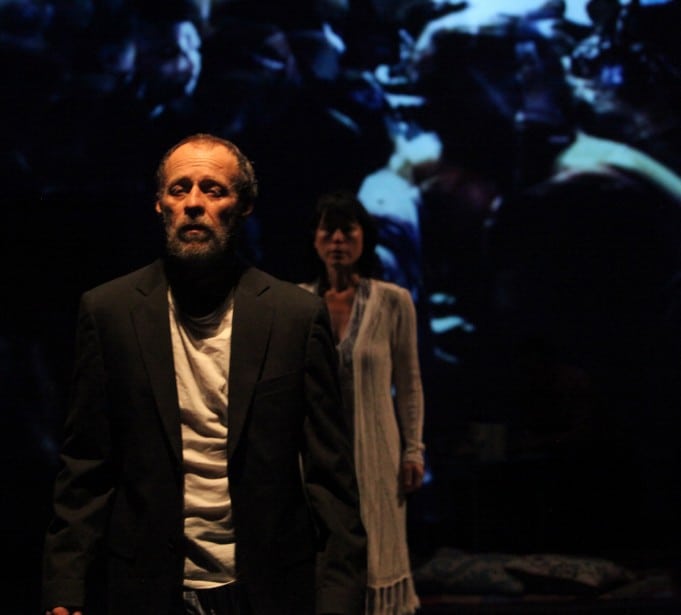 I have an admittedly odd fascination with mental breakdowns. For whatever the reason, I find great interest in how authors, filmmakers, and even musicians tackle the subject in their work. Recently it’s taken me once again into the world of (arthouse) film, in particular Polanski’s outstanding apartment trilogy (Repulsion, Rosemary’s Baby, The Tenant), and David Lynch’s mind-bending Mulholland Drive, and David Cronenberg’s bleak Videodrome, and Darren Aronofsky’s ground-breaking, haunting Black Swan. I can’t count the number of times I’ve watched these greats. All have unique interpretations of how a mind can fall apart, and a director’s perspective on how best to convey that disturbing process to an audience.

This is a table. This is a chair. This is the floor. And this is no-holds barred creativity in action.

Last night I witnessed a stage treatment of the very topic so dear to my heart. In San Francisco, the hallowed Magic Theatre held the world premiere of Linda McLean’s Every Five Minutes. Though holding less in common with the aforementioned films than, say, something like One Flew Over the Cuckoo’s Nest, I’ll say this: I left with my eyes wide open. This Scottish playwright bamboozles the senses. In the first ten minutes of this play she seeks to disorient us. Time shifts back and forth, abruptly. Lights blind us. Tonal sound effects disorient. Meanwhile, two couples are enjoying a bottle of wine and some light conversation in a living room. But Mo (Rod Gnapp) is having trouble focusing. His mind seems elsewhere. Is he breaking down? Or is he dreaming? Did he already break down, and is on the mend? What… the what?

If you dig metaphors, the obtuse, and reading between the lines, then this production is your triple decker pastrami sandwich. Bring your appetite, this one is a juicy affair.

I’m not entirely sure I understand every moment in this play. But I do know this: like a lot of plays at Magic over the years it grabs your attention, shakes it relentlessly, and sears the memory. Once again, I found myself eager to discuss every moment, revisiting almost the entire 90-minutes as I headed across the Fort Mason parking lot on a brisk evening. What did this mean? Why did that happen? Big bad wolf? Is Rod Gnapp the man, or what?!

To be sure, a lot of people won’t like Every Five Minutes.

This is not a Broadway musical — though somehow Linda McLean finds a way to include a highly entertaining singing number featuring Bozo (Patrick Alparone) and Harp (Jomar Tagatac), two clowns known to perform in the subconscious. This is an assault on our senses. It’s disturbing, jarring to watch, and overall just plain uncomfortable. A lot of that has to do with the rapid-fire scene changes. If there’s a traditional structure here I’d be hard pressed to identify it. And just as Polanski portrayed in his early films there’s an ominous fear of opening doors to the outside world. Even though we’re not physically trapped, we are nevertheless mentally trapped.

Rod Gnapp, as so many around the San Francisco Bay Area already know, is the man. His performance here is #epic. It should not be missed. If there was a God on this evening–and it was hard to say exactly–it had bestowed upon him monumental control. Monumental greatness. Not in a Shakespearean, commanding-voice kind of way, but rather in a nuanced, at times bellowing, at times whimpering, and mostly at times mute, kind of way. Extraordinary stuff. I mean, how many times can an actor get stripped naked (Magic loves the full-on frontal don’t we know!), and be given a bath in one play?

Not only should Gnapp win awards for his performance for the ages, but so too should Eric Southern for the incredible lighting, and Hana S. Kim for the stunning projection work (the eyes have it, a la Repulsion), and Loretta Greco for her outstanding direction; the Magic thrust configuration, and the small movable set consisting of a chair, ottoman and table work well for this material, but it’s her deft control of movement that makes it all come together so well.

If there’s a weakness it’s possibly in the epilogue. It runs long, lacks the punch and exclamation point that the material that precedes it deserves. Then again, by then we’re mentally exhausted, just happy to be “home.” Also, are we human? Yes. Still, flatulence humor? Not so much.

WELCOME TO YOUR LIFE

You should see this play. But know that you’re entering the cerebral arthouse. By the end, after all the time shifting, clowning around (literally), and visceral effects, a truth begins to emerge. Mo endures. This is a table. This is a chair. This is the floor. And this is no-holds barred creativity in action.