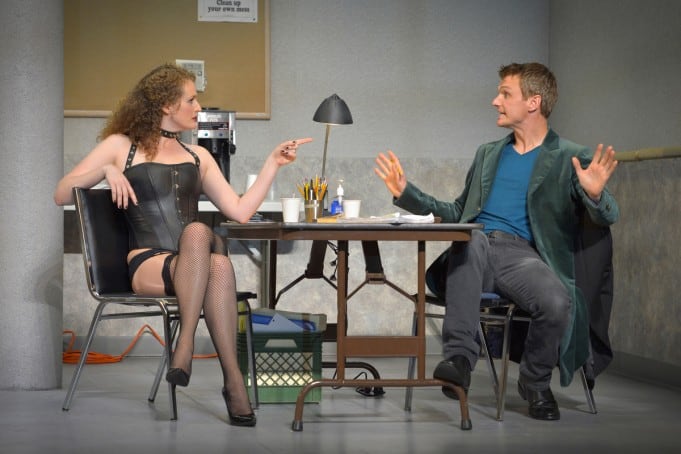 It’s not two minutes into the play. Your emotions have already been pulled in three different directions, so it takes you a bit to unpeel the first layer of this onion. Venus in Fur at A.C.T. San Francisco opens with the simultaneous crack of lightning and crash of thunder, putting the viewer on edge. As the thunder fades, we eavesdrop on playwright and director Thomas, phone in hand with his wife after auditioning a bunch of unsatisfied actresses. The familiar chat reassures, as does the personable Thomas himself.  The phone call ends as Vanda enters, raising your irk at her seemingly abrasive ignorance.

If you thrive on Sherlock Holmes brain teasers, this play is right up your alley.

These fast-paced transitions and multiple layers (the notion of it being play about a play about a book being only the first) don’t stop for the entire 90 minutes of Venus in Fur.  It remains edgy throughout, demanding that the audience follow the transitions as to who’s the dominated, who’s the director, and who is playing what role, as actors step into and out of character. Afterwards, you blink, still trying to grasp the transitions of gender bending, when you realize this play has more layers than a rainbow layer cake.

Much of the credit is due to Brenda Meaney, the actress who plays an actress named Vanda, who plays the character of the same name in a play taken from Sacher-Masoch’s book Venus in Fur. Phew! Even these preliminaries are exhausting. However, Meaney’s take on the seemingly flaky, abrasive actress who arrives late for an audition eases the audience into these transitions, at least until the realization dawns that she’s left much unrevealed as she deftly transitions to the character she plays.

MORE STARK INSIDER: Theater Review: ‘Bauer’ and the art of not painting

Henry Clarke, as Thomas the director (who ends up playing Sacher-Masoch’s character Severin) has a similar approach to his character. Whereas Meaney seems like such a flake we underrate her, Thomas seems entirely reasonable at the outset, at least until he’s unmasked by his actress. Together, he and Meaney offer up a way to navigate this incredibly smart, funny script. 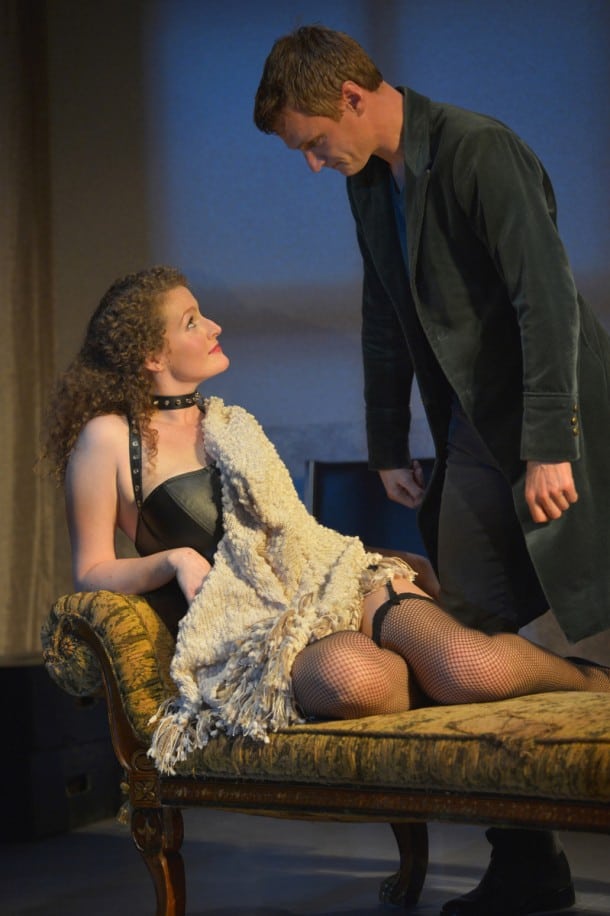 Scenic design by John Lee Beatty is spot on, taking you into the cold-water studio of Thomas, replete with exposed pipes, desk, and divan. There’s nothing here that distracts from the characters that occupy this space.

After all these machinations, you might say “so what?” Indeed, the work had a cold feel, that left me wanting more. However, if you thrive on Sherlock Holmes brain teasers, “Venus in Fur” is right up your alley. This is smart, funny… and in the words of Carey Perloff, a “totally present tense play.” Count on being engaged, perplexed and entertained with this laugh-aloud thriller.