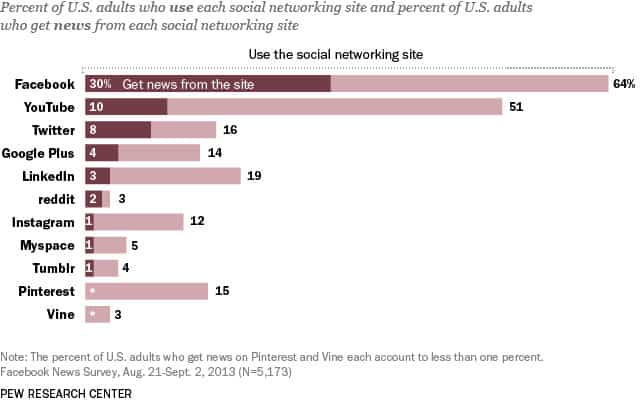 Are you sitting comfortably? Then we’ll begin…

3 out of 10 adults get their news from Facebook. Yes, Facebook – that social networking feeding grounds alternatively known as Jimmy Kimmel’s magical hoax machine.

That beats all other social networks when it comes to news consumption.

According to Pew Research Center’s “State of the News Media” report for 2014, YouTube was second with 10% of adults using it to get news (“news”).

Twitter, Google Plus and LinkedIn round out the top five at 8%, 4% and 3% respectively.

Far and way Facebook dominated the survey (administered according to Pew Research last August). Almost two-thirds of adults use the site. When it comes to news, most (78%) say they see it on Facebook for other reasons. As could be expected, entertainment news was the  most popular on Facebook – business news came last. 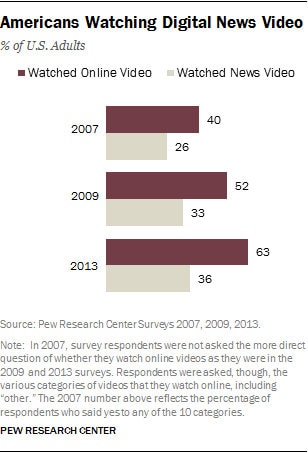 Other interesting data points from the annual report:

Anyone interested in news and media trends, should at least peruse the report. A comprehensive study, compiled as part of the Pew Research Center’s Journalism Project, the “State of the News Media” covers everything from revenue related to American journalism and the impact of digital reporting on the news industry to new video on the web, and the state of various media channels including the Web, social networks, and “legacy news platforms” such as newspapers and television. 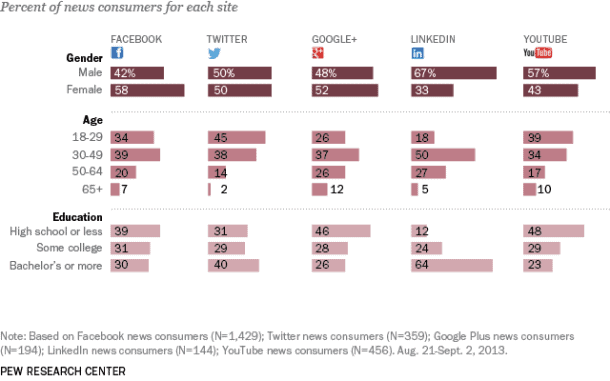 Those that follow social media trends will want to read “8 Key Takeaways about Social Media and News.” Several interesting data points are discussed including the ever-popular “sentiment” tracking on Twitter – Pew finds that opinions on Twitter “often differ from broad public opinion.”

News  organizations and publishers might want to dig into the demographic profiles presented in the findings (see chart above). LinkedIn, for example, is male dominated and highly educated. Twitter has the largest share of users aged 18-29.

Amy Mitchell notes in the report overview that “2013 and early 2014 brought a level of energy to the news industry not seen for a long time.” She senses “hope” for the future of American journalism.