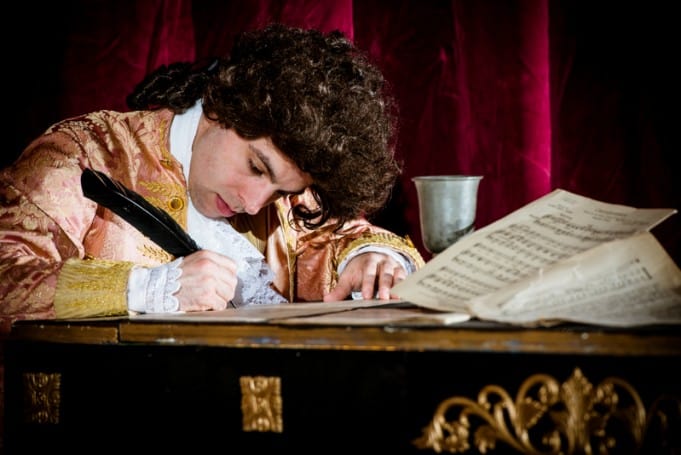 Amadeus, like My Fair Lady, is so artistically demanding and well-known that one wonders why anyone stage it. Small companies are often guilty of this kind of overreach – usually with predictable results. However, occasionally someone does something so astounding that it remains a high water mark for seasons to follow. San Francisco Playhouse did it with My Fair Lady, and City Lights in San Jose comes darn close to doing the same with Amadeus.

Much of the credit here goes to the redoubtable Aidan O’Reilly, who played Mozart’s nemesis, Antonio Salieri. O’Reilly has a quiet intensity, as if consciously containing all the energy at his command. Nary a gesture is wasted in this astonishing performance. Indeed, some of his most remarkable scenes are ones in which he moves not a muscle, but remains pointedly focused. Once you’ve seen this, you’ll want to see more of him.

George Psarras, as Mozart, is Salieri’s polar opposite: unrestrained where Salieri is contained, guileless where Salieri is manipulative. The portrayal of a dementedly cackling Mozart, were etched into our cultural consciousness in the in the mid-‘80’s by the inescapable trailers for the Milŏs Foreman movie. Such images make this role difficult, if only by creating expectations, but Psarras makes it his, bringing a sweet naïveté that the movie didn’t quite pull off.

However, acting alone isn’t enough to transform a show from overly ambitious to something that deeply engages the audience. One thing learned from the San Francisco Playhouse My Fair Lady is that less is more.

Such a minimalist perspective seems impossible for a show that most of us remember for orchestration and lush sets. While Amadeus didn’t come anywhere close to the bare bones set of My Fair Lady, smart decisions were made along the way as to what to omit.

For starters, the production didn’t try to reproduce all the music found in the Foreman movie, largely making do with snippets of canned operas and concertos. However, this focused attention on those rare instances when someone approached the baby grand on stage, such as when time Salieri sounded not unlike a second year piano student, and when Mozart repeated the composition, sounding more like – well, Mozart.

Set designer Ron Gasparinetti didn’t opt for a minimalist set. However, instead of creating an artificially opulent world with an over-abundance of detail, he relied more on framing the set to create perspective and to literally open up the world of 18th century Vienna. Instead of complex transitions, individual pieces of period furniture were easily taken on and off the stage to suggest a location, a strategy that was advanced by Nick Kumamoto’s subtle lighting design.

Sales of this show were so brisk it sold out before the previews. Fortunately, it’s been extended through April 27th.