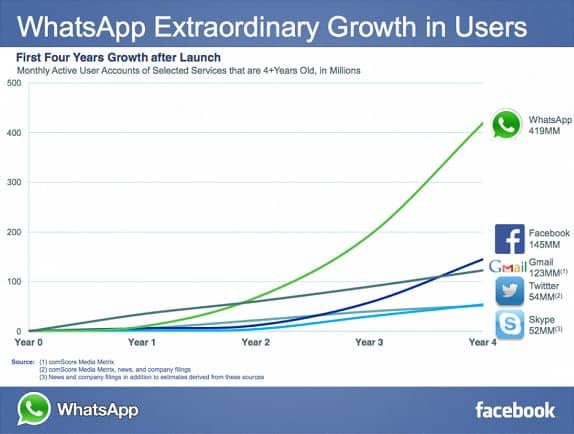 My first reaction to the $19 billion WhatsApp acquisition by Facebook was: WhatBubble?

The valuation certainly seems rich, especially when you break it down by employee revenue ($380 million per).

To very briefly set the scene, WhatsApp is an app that enables users to send free messages – text, images and video.

The stakes for social networking are high. Growth needs to come from somewhere. Facebook has a deep pool of resources and so CEO Mark Zuckerberg (who reportedly pitched the deal over dinner) is willing and able to take extreme measures to address key challenges that might stand in its way.

WhatsApp is a quick cure for at least two current challenges staring down Facebook:

At roughly a billion users, Facebook can only grow so much. Unless it boldly seeks out new civilizations, new users are likely to be found on earth and hanging out on other networks. WhatsApp has users to spare, and has out-performed all other major social networks in its first four years including Twitter, Facebook, and even Gmail:

Better still, most of WhatsApp users are net-new. That is, they aren’t active on Facebook.

It’s the era of the selfie. And you find those more often on Instagram and messaging services… not Facebook.

The average Facebook user is 41 years old. That could be a long-term issue. Much like wineries needing to target Gen X, and eventually Millennials to replace the aging Boomers who constitute the majority of buyers, social networks too will need to groom future generations.

The average WhatsApp user is in their teens.

So there you have it. In a nutshell, $19 billion buys Facebook lots of young (mobile) users. That, of course, means more eyeballs. And ultimately a nice lift for mobile ad revenue.

WhatBubble? Well, it’s seems just a tad frothy here in Silicon Valley these days, but it seems there continues to be–at least for now– value (or at least perceived investor value) in social networking plays.

My second (and perhaps slightly random) reaction to the acquisition:

Team Canada vs. Team USA in Sochi. Hockey. The best sport. My heart is with Canada on this one (as it always is), but my brain (telling me US chemistry is better) is with the guys led by Zach Parise.