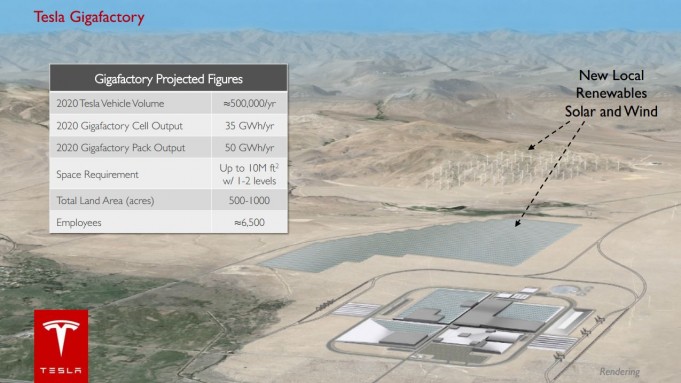 Gigafactory. The name alone evokes futuristic awe. It’s the kind of word that could only come from the genius (mad?) mind of one Elon Musk.

Tesla, one of his pet projects leading the human race into a world full of big ideas, announced that it will build a Gigafactory in one of four Southwestern states: Arizona, New Mexico, Nevada or Texas. Presumably real estate in Fremont (California), current home to manufacturing, is too prohibitive. The site is projected to product 500,000 Tesla gen III cars — of the more affordable $35K US variety — by 2020. It will employ approximately 6,500, and occupy 10 million square feet.

According to the brief PDF that Tesla sent out today, finished batteries from the Gigafactory will be sent to Fremont for final vehicle assembly.

.@lptacek Hilarious! This is going to be an interesting future. No doubt, Elon has electrifying vision. #gigafactory #hyperloop

The news comes as Tesla completes a $1.6 billion financing round. Reportedly, Panasonic, maker of batteries for the current Tesla and obvious beneficiary of the expansion plans, will kick in about two-thirds of that amount.

It’s safe to say the world has not seen an entrepreneur quite like Elon Musk in a long time. Richard Branson, and what he did with Virgin in the 80s? Possibly. Or maybe God himself, Larry Ellison, and what he did with databases in the early days of the computing revolution. Maybe. I’d suggest we might be looking at someone on the scale of a Henry Ford. It’s too early to tell of course. And, granted, Musk’s idea–electric cars–is not his, nor is the invention upon which it is based (the automobile). Yet it is his vision that is driving the industry forward (and possibly the country too). Quantum leaps in thinking are not coming from the established players such as Ford, or Honda, or BMW. Toyota, with its successful Prius model, probably comes closest. Maybe the maxim is true, that it does take an outsider to truly shake things up, and make change.

Many have doubted the veracity of Musk’s claims, most recently with his fantastical tube transportation system known as the Hyperloop. Last year he released the “open source” plans, in spectacularly entertaining fashion – of the P.T. Barnum variety (for another example of his Job-esque showmanship, look for the video demonstrating a face-off between re-fueling an Audi and swapping the battery on a Tesla S sedan). For the most part, though, detractors have (fortunately) been wrong.

Model S has been selected "Best Overall" car for 2014 by @ConsumerReports! https://t.co/kDtFaCc9Re pic.twitter.com/jNvaL3AgO9

One oddity, a bugaboo that seems to shadow Elon Musk (and Tesla) wherever he goes is the fleet of naysayers, including many high profile politicians and outspoken TV personalities. Why on earth, I think, every time I see one of these critics throwing red herring after red herring upon the masses, would we not celebrate scientific achievement? Why wouldn’t we modernize, not only infrastructure and systems, but also Federal policies and regulations to encourage and incentivize this kind of job creation and out-sized entrepreneurship? Why do we believe America of the past is America of the future?

Meantime, at least around Silicon Valley, Tesla Motors is a heroic testament to the big idea. That science, technology, innovation can prevail. Will the Gigfactory come to fruition exactly how Elon Musk envisions? It’s doubtful. But when it does get built I look forward to taking the Hyperloop to visit the new site.