The market for 4K production is heating up. Panasonic recently unveiled the GH4, the first interchangeable lens camera to shoot 4K – though pricing has yet to be announced it’s widely expected to sell for around $2,000. Blackmagic has responded. The small Australian company, which has been one of the hottest in indie filmmaker circles over the past twelve months, has dropped the price of its highly anticipated 4K camera.

Dubbed the “Production Camera 4k,” the model will now sell for $2,995 – for both new customers and existing pre-orders I’m told. That’s 25% less than its originally announced price of $3,995. It’s worth noting this move happens before the camera has even begun selling. Such are the competitive forces in the market for all things Ultra HD (UHD, at 3840×2160, or approximately 4x the resolution of 1080p).

While that might still seem like a lot for a camera, keep in mind Blackmagic products are targeted at independent filmmakers, documentary makers and corporate professionals. With advanced features such as a Super 35 sensor, global shutter, SSD storage, and CinemaDNG recording, Blackmagic once again has a chance to disrupt the market (in 2013, it made a name for itself with the $1,995 2.5K Cinema Camera, which was then followed by the fast selling $995 Pocket Cinema Camera). Similar functionality in competitive offerings, such as what you’d find from a company such as RED, costs in the tens of thousands.

One of the guiding principles behind Blackmagic is to give a filmic look to digital capture. In particular, the company has quickly become known for its ability to provide 12 stops of dynamic range (with all models, including the Pocket Cinema Camera, Cinema Camera, and Production Camera 4K). This feature results in footage this less contrasty (for lack of a better expression), and provides more detail in the blacks – results that most filmmakers lust after.

For a guy like me things just got a whole lot more interesting. I shoot with Canon EOS ( you can read about my trials and tribulations over the years here) for Stark Insider TV. I’ve been contemplating a move to Blackmagic, but have been holding off, knowing that my workflow would require some changes should I make a change. 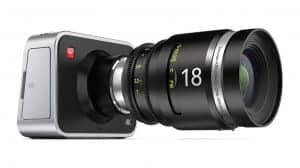 Also, these cameras aren’t necessarily ideal for run-and-gun; typically what we do around here when it comes to covering theater/arts and food and wine events around San Francisco. Another point to keep in mind is that these prices are for the camera only – the advanced nature of this kind of gear will require rigging, various audio add-ons, and a multitude of accessories (e.g. battery packs) to make the whole thing serviceable. Those familiar with the Blackmagic brand specifically and this market in general, of course, already know this. But it’s worth mentioning as it can significantly drive up the overall cost of getting up and running. One thing that’s especially great about the production camera is that it uses the ubiquitous EF lens mount. So all your existing Canon glass is good to go.

After getting the email from BMD announcing the new price (it came in shortly after midnight, Pacific time), one word came immediately to mind: