Man in a Case

How do you define performance art? I’m not quite sure of the answer, but I’m quite certain I know it when I see it. When artists push the creative envelope the result can be as magical as it can be perplexing. Man in a Case, which opened last night at Berkeley Rep, serves up helpings of both.

Billed as a high-tech fusion of theatre, movement, music and video, the production is a technological masterpiece. Video screens populate the set, often springing up from nowhere; televisions stacked on top of each other in a small apartment recall the MTV generation. Lighting–one of Berkeley Rep’s many fortes–is exquisite, precise. Sound design, superlative.

Unfortunately the techno-wizardry mostly dominates. That leaves the actors at the mercy of the machinery, and try as they might, it was evidently difficult during the West Coast premiere for the human side of Chekhov’s short stories from 1898 (Man in a Case and About Love) to connect with the audience.

Mikhail Baryshnikov stars, and might be reason enough for date night at the theater. Man in a Case seems the perfect vehicle to showcase his veteran talents. Two scenes in particular sear the imagination. After reaching the top of a flight of stairs, he’s struck down. We watch as he falls, both in real-time on stage, and on a screen projecting video from a camera placed from his detractor’s perspective. Lights strobe to a brooding beat (worthy of A Telltale Heart). Baryshnikov tumbles (beautifully) down the stairs in a slow motion-like dream sequence. Later, during the second story, About Love, he performs while lying on the floor. His image is superimposed on a railway track on an overhead screen. His lost lover reaches out. They entangle, turn away, search for each other. Words alone can not do this scene justice – it’s simply gorgeous and heart-wrenching at the same time. 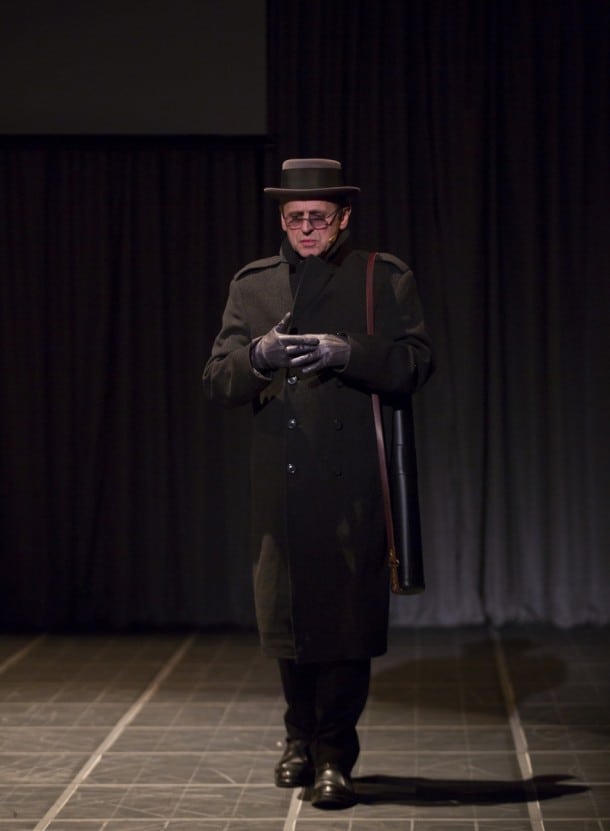 Ultimately I had a hard time connecting with any of the characters. Maybe that’s by design. After all, the central figure in the first story is a hermit – and the two hunters trading tales are (or were) Russians living in the nineteenth century.

Though the visuals are a feast for the senses, there’s several moments where the material is at least one black and white shot, one close-up of an eyeball, or one inexplicable expression away from becoming unwitting satire and worthy of an SNL skit. Art can be a slippery slope. One man’s “Voice of Fire” is another’s highway to hell.

On the other hand, taking Man in a Case literally is likely not the right approach. If we were to evaluate it based on the ability to provoke, to create reaction and to elevate emotion, this adaptation fares far better. I could never quite find myself reaching that intellectual shelf. Beautiful and haunting, yes – technically and visually I’m easily won over. But, in the end, as far as the soul of this particular production is concerned, the word’s of one of the character’s echoed in my mind as I pulled out of the Center Street parking garage, “gloomy, oppressive and senseless.”