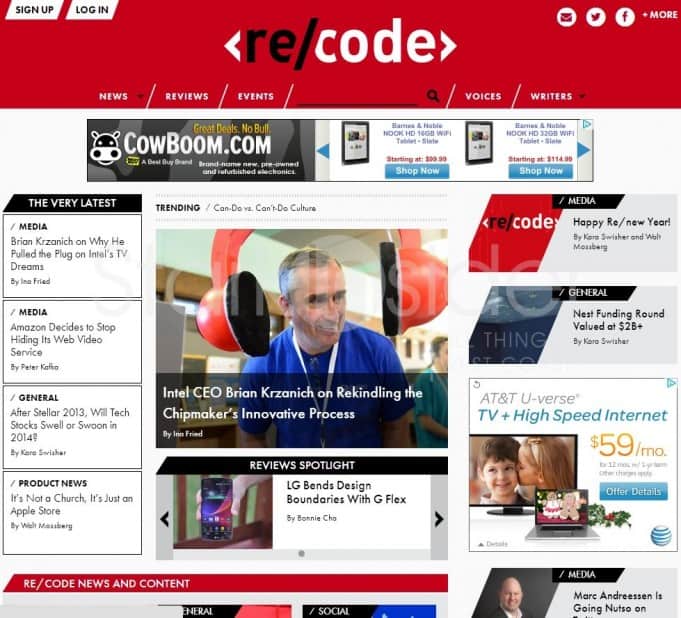 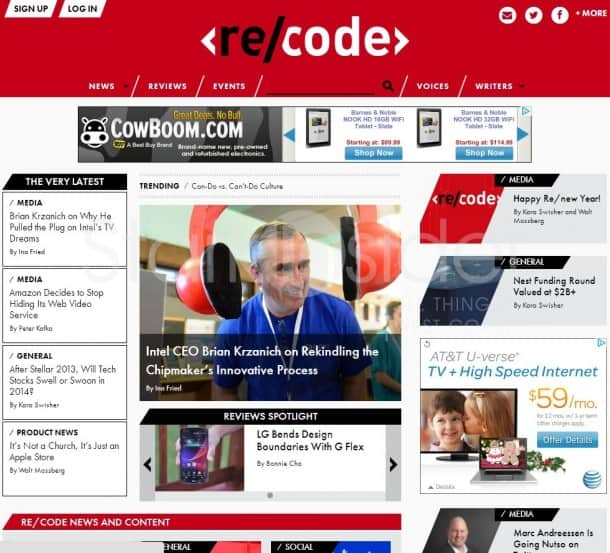 Tech blogs are a dime a dozen. Quality ones, though, are few and far between. One of the industry’s best was “All Things D” – the former tech section from the Wall Street Journal led by stalwarts Walt Mossberg and Kara Swisher. As most who follow the scene know that arrangement blew up in 2013. ATD was shutdown. A new team was brought in, and a new tech section “WSJ.D” was launched on New Year’s Day. Meanwhile, Mossberg and Swisher have gone independent, bringing most of their former team along for the ride. Their new site “Re/code” also launched yesterday. The site appears to be mostly news focused, featuring stories on start-ups, tech happenings, with the occasional review throw in for good measure.

That, of course, is the million dollar question. And it makes for grand spectator sport.

Ad dollars are increasingly spread across an ever-expanding landscape of tech writing; The Verge, Engadget, Gizmodo, CNET, Mashable (what has happened to this site?), TechCrunch, and a deep bench of smaller sites like Ars Technica, Slashgear, GigaOM, and Computerworld are all competing for ad spending. At some point, the pool of money won’t be large enough to support paying a small tech writing team (I’ve been told Re/code employs just over 20 full-timers). Something, at some point, has got to give.

One of the differentiators the former ATD site brought to the table was its annual conference. It became one of the industry’s most influential events. Steve Jobs, Bill Gates, and just about every notable Silicon Valley CEO made (often infamous) appearances. Conferences can be big moneymakers – earning far more than banner ads. Sponsors are willing to pony up for events that draw large audiences.

Another test in this experiment is the power of the Wall Street Journal brand. How much of the AllThingsD success was attributable to the awareness associated with the master brand?

Re/code will be an interesting story to follow in 2014. While consolidation has been the order of the day for the past few years when it comes to tech blogs (AOL/TechCrunch, CBS/CNET, etc.), here we have a team going indie (though Re/code does count NBCUniversal and Windsor Media as investors). The last tech blog to successfully launch from scratch was The Verge, in 2011 – the scrappy team there has done well to craft a unique voice in tech, innovating in particular with high quality video, and long-form journalism.

As for the name, Re/code? Not my favorite. Using the word “code” invokes thoughts of coding, programmers – not necessarily tech news and reviews. Regardless, the name shouldn’t impede the site’s potential success. After all, what on earth is a “CNET”?