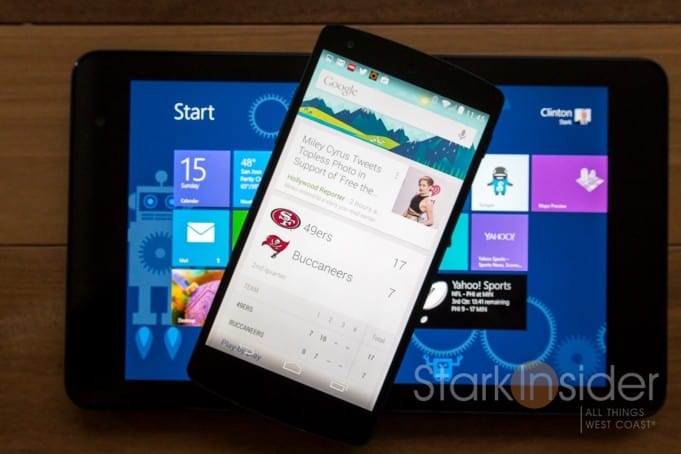 Is there a changing of the guard? Apple raised the ante with the release of the iPhone 5s, a svelte 64-bit beauty. Reviews have been glowing, sales brisk (new orders now ship in days instead of weeks) and many regard it as the defining smartphone experience.

But, but! The story does not end there. No way Bob.

In November Google responded.With the Nexus 5 bragging rights for smartphone supremacy have taken an interesting turn. No longer content to merely appeal to the Android faithful, the LG-made Nexus 5 is a bid to reach critical mass. Google’s latest operating system–Android 4.4 aka KitKat–is a key component of that strategy. So far so good. KitKat on the Nexus 5 is without a doubt an exceptional experience.

After using the Nexus 5 as a daily driver for about a month, I dare suggest it’s the best smartphone on the planet. Period. It simply works a treat.

Many I know are debating between the iPhone 5s and Nexus 5. iOS vs. Android. Apple vs. Google. It’s ideological stuff. There’s many ways to approach the decision; most involve bloody smack-downs with ardent fanboys defending their platform of choice in forums filled with hundreds of pages of rants, ad hominids. Rather than delve into specs, or PPI shootouts, here’s 5 reasons why I believe the Nexus 5 beats the iPhone 5s. Each of these on their own would be reason enough for me to go with LG’s Android beauty. As a whole they conspire to create a smartphone that is absolutely a smash.

Spend some time with the Nexus 5 (or just about any other Android-based device), and you’ll notice something when you switch to an iPhone. The home screen looks… static, boring, uninformative. You can thank Android widgets for that. Long press on an empty space on the home screen, then select ‘WIDGETS’. From there you’ll get a rich assortment of widgets, in various sizes, that can be dropped onto any of your screens, so long as there’s space. I really appreciate being able to see the latest headlines (sad to hear about Peter O’Toole – Lawrence of Arabia is a cinematic masterpiece that everyone should watch at least once), weather, social updates and my calendar without having to open an app. This functionality alone makes the Nexus 5 extremely useful. I should note that Microsoft too has done a great job in this respect. With Live Tiles, you get the same kind of dynamic information on your home screen. As it lagged with the notification system, Apple needs to shed its grid-based app icon design metaphor. Nexus 5 with KitKat absolutely nails the home screen experience, and widgets are a large reason why.

Over dinner recently I was discussing with friends the biggest tech stories and trends in 2013. Bitcoin was a conversation point–one that I admittedly don’t entirely comprehend. So too was 23andme, the sad demise of BlackBerry, and the rise of Tesla (the Model S is  surprisingly commonplace here in Silicon Valley). Yet, out of all the headlines and bigtime news (Yahoo and Meyer, Microsoft CEO search, etc.) I offer up Google Now as a sleeper. With KitKat, Google has made the incredibly useful feature available with one swipe to the right. You no longer have to long press home and swipe up (though that still works). Swipe right and you get a screenful of stuff that is (generally) helpful right… well, now. There’s a lot of talk about the contextual era and sensors these days. Google Now is a great example of something valuable, something that helps our everyday lives – something that we gain in exchange for giving up information about ourselves, our location, our habits. I’ve come to love it; though, true enough, what Google knows about me can cause me to take pause. “Airplane Employees Really Don’t Care That You Left Your iPad on the Plane” – that headline ran on my Google Now screen this morning… Google knew (but of course) that my wife left her Mini on the plane (again).

Expect big things from Google Now. This is the proverbial tip of the iceberg. Apps, touch-based interfaces and social networks are table steaks. Now it’s all about predicting what we’re about to do, or what we’re about to need. Notifications tell us about the past. But something like Google Now tells us about the future. Watch for it. Google is just getting started on this technology. It’s a huge reason why the Nexus 5 beats the iPhone 5s.

At only 4-inches the iPhone screen is simply outgunned by the Nexus 5. While those with smaller hands might disagree (and that’s why I like the choice of models/sizes/price-points that Android affords), a 5-inches of real estate really helps Android shine. You get lots of room for widgets. Readability is extremely good. And watching movies even becomes a realistic proposition.

Read what you will about comparos across the Internet between various displays, but know this: the Nexus 5 display is absolutely beautiful. It’s (very) bright. Colors pop. Whites are white. Viewing angles are superb. After spending time using a 5-inch based smartphone, there’s simply no way I could come to terms with the cramped screen that Apple insists on using (word is that will change in 2014).

Don’t like the stock Android home screen? No problem, switch it out. Go crazy. Pull up the Google Play Store, and search for “Launcher”. You’ll find an assortment of quality home screen replacements. These are apps that can be set as the default. I particularly like Nova Launcher and Action Launcher. These are feature rich, highly customizable apps that allow you to change up the Android experience. Action Launcher, for example, does away with the app drawer, instead replacing it with a tidy shade that pulls out from the left. This is the magic of Google’s approach. Android is open (for the most part) and modular. That means we can replace home screens, keyboards and otherwise change/enhance native functionality. iOS and the iPhone 5s are at a severe disadvantage in this disregard. With Apple you need to buy in to the Apple way. If you do, great. Have it the way Ivy and team want it.

Did I mention price yet?

The value proposition of the Nexus 5 (and the Nexus program in general) simply can’t be beat. For $350 you get a premium smartphone with a stunning display, running what may well be the most advanced, slickest OS on the planet in Android 4.4 KitKat. All that and no carrier commitment, and unlocked freedom. Feel free to travel the world and pop in SIM cards at will.

There’s little doubt that Google is internally subsidizing Nexus devices, and the Nexus 5 in particular. As consumers we benefit immensely. I can’t think of one single compromise.

I could go on. These are just five of my favorite aspects of the Nexus 5. There’s plenty more we could dig into – like the superiority of Google Maps over Apple Maps, the brilliance that is Google Voice, the best-in-class Android notification system. I’m convinced that Apple has lost a step or two. iOS 7 is a bit of a mess. And every new product we saw come out of Cupertino this year was incremental. Sure, the iPad Mini remains the best tablet ever made. We’ve come to expect epic design from Apple. But we’ve also come to expect game-changers; entirely new product categories that blow our minds. Post-Jobs this is not happening… at least not yet. Meanwhile Google has been innovating like mad. Google Now, as I mentioned, is merely the warm-up act when it comes to this so-called “contextual” future.

It’s still early in mobile, but as we close out 2013, it’s clear that Google has won this round. Nexus 5 beats (the pants off) the iPhone 5s.